In Italian Insects – Part 1 I described a few of the, for want of a better word, ‘household’ insects that we see more or less all year round. But, of course, many insects are strictly seasonal …

Before we begin though, here’s a message from Meaghan, our manager at Transparent Language, explaining some changes that you may begin to notice:

“Ciao a tutti, this is Meaghan from the Social Media team here at Transparent Language. As you’ll probably soon notice, I’ve asked Geoff and Serena to publish fewer posts each month starting this month. We’re playing a balancing act with our many other language blogs and the languages that most interest our customers, so we’ve very regrettably had to sacrifice a bit of Italian each month. Don’t worry though, Geoff and Serena are not going anywhere, and we love their posts as much as you do. Forgive me for making you wait just a bit longer between posts. If you’d like to know more or have any questions about what we’re up to here at Transparent Language, don’t hesitate to reach out to me at TLsocial@transparent.com.”

Thanks Meaghan!
Now, back to gli insetti. I’ll divide the seasonal insects into those that we see from early spring until late autumn, and those that appear at more specific times. Let’s begin with the former.

La formica = the ant (plural: le formiche) is one of my favourites. She fills me with admiration and provides me with hours of entertainment. Excavating, cleaning, gathering, and even, for a couple of rare days a year, flying! She’s so organised, purposeful and loyal. During recent torrential rains, I worried about her, sheltering underground in her carefully constructed nido (nest). But when the bad weather passed, there she was together with her sisters, creating little volcano like mounds around her front door as she cleaned out the debris.

Other insects that we see throughout the warmer parts of the year are:
la mosca = the fly (plural: le mosche), yes, ho ho ho, it’s written and pronounced the same as Mosca (Moscow), so you can make jokes about la mosca di Mosca (the fly from Moscow)!
l’ape = the bee (plural: le api), that’s right, it’s also that funny little ubiquitous three wheeled truck made by Piaggio.
la vespa = the wasp (plural: le vespe), also a famous type of motor scooter, also made by Piaggio.
la farfalla = the butterfly (plural: le farfalle), and its nocturnal sister …
la falena = the moth (plural: le falene)
il coleottero = the beetle (plural: i coleotteri) comes in thousands of shapes and sizes, but the species that we see most frequently is …
lo scarabeo = the dung beetle (plural: gli scarabei), or as Serena’s mother used to call them ‘rotolacacca‘, the ‘craproller’. 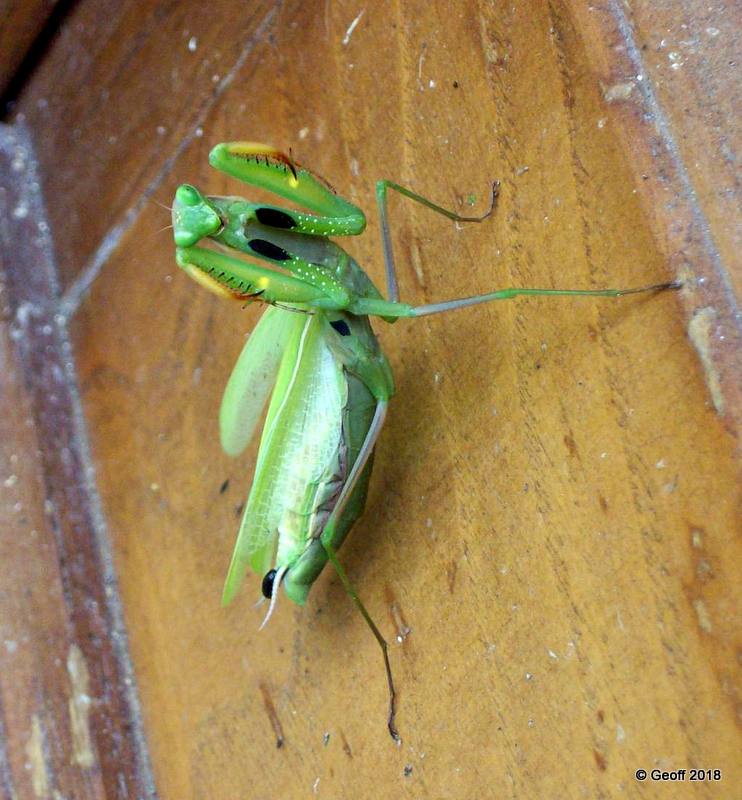 A mantide religiosa on our front door. 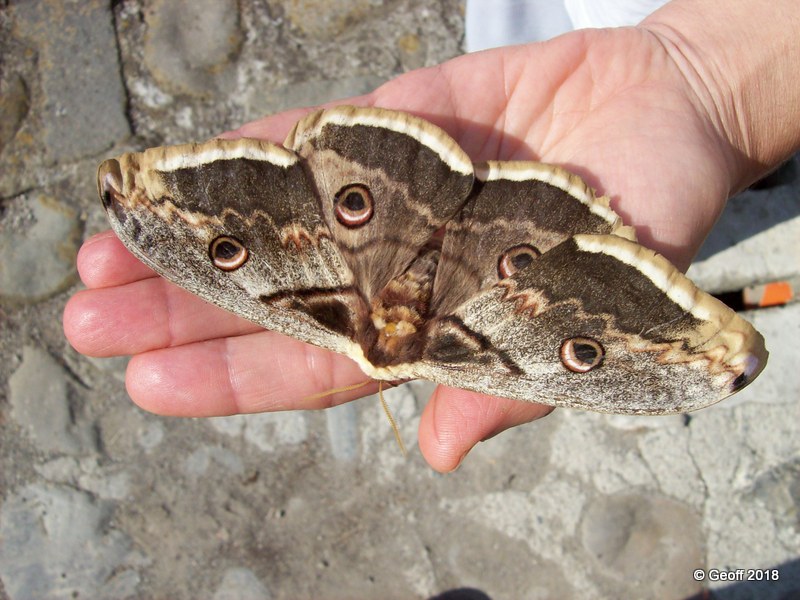 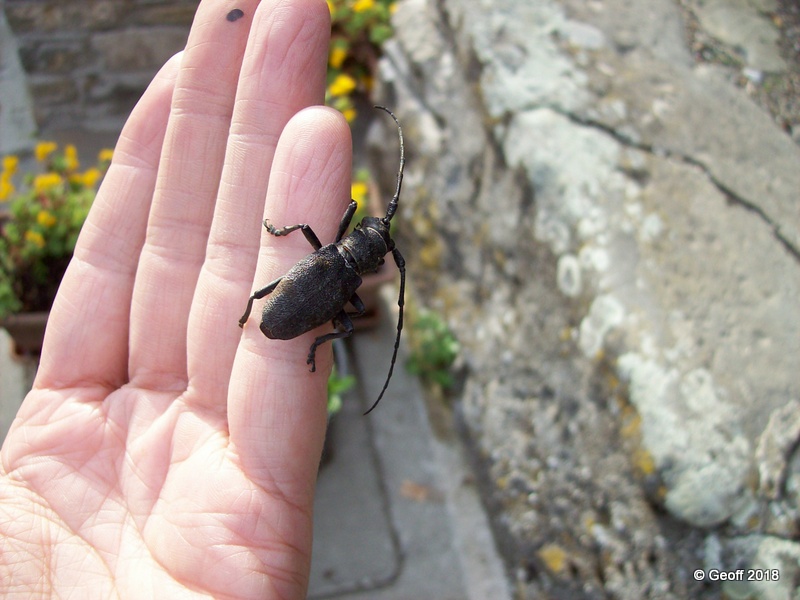 A coleottero that I found in our wood pile. 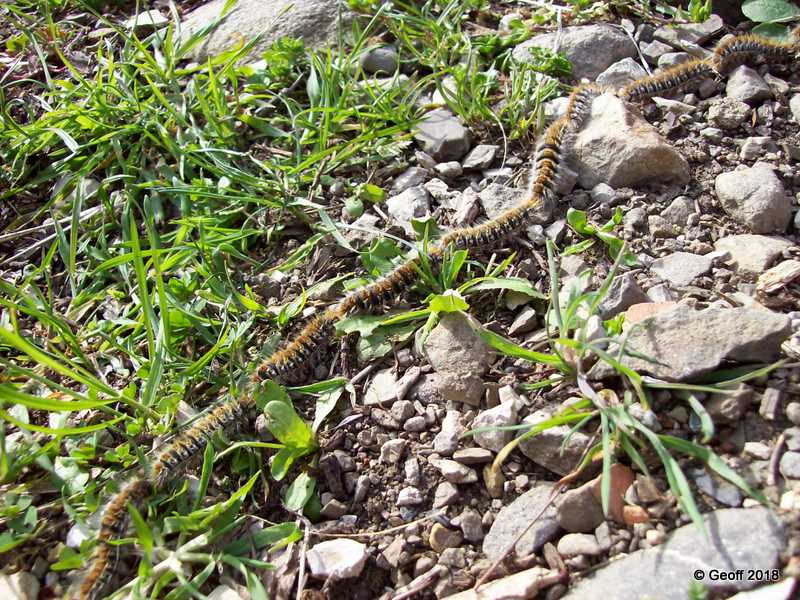 Not a snake but a line of processionarie. This is how they move around!

As it gets hotter, other insects make their appearance, such as:
la cavalletta = the grasshopper (plural: le cavallette)
il calabrone = the hornet (plural: i calabroni), this monster can be quite unnerving, but he’s still quite beautiful … from a safe distance!
l’ape carpentiere = the carpenter bee (plural: le api carpentiere), this usually makes a big impression on foreign visitors due to its large dimensions and stunning blue black iridescent colour.
la cicala = the cicada (plural: le cicale), whose rasping call (il frinio della cicala) is synonymous with scorching hot Mediterranean landscapes.
la sfinge colibrì = the hummingbird moth (plural: le sfingi colibrì), it’s always a pleasure to see her in our garden but, due to her speed, she’s usually too elusive for me to photograph.

Then there are those species that we only see during specific periods, and these are often quite spectacular:
la lucciola = the firefly (plural: le lucciole) performs spectacular dances of light every night from late June through to mid July.
il bruco = the caterpillar (plural i bruchi). Especially impressive is la processionaria = the pine processionary (plural: le processionarie). See photo above.
la mantide religiosa = the praying mantis (plural: le mantidi religiose) is a slightly unnerving character that we see mostly during September and October. For some strange reason they have a penchant for our front door!
And finally, the little fellow that inspired these blogs …
l’insetto stecco = the stick insect (plural: gli insetti stecco). A few days ago, Serena ran into the house and grabbed the camera. “Che c’è?” I asked. “C’è un bell’insetto stecco, vieni a vedere!” she replied.
Beautifully minimalistic, and perfectly camouflaged, if he hadn’t decided to take a rest on the window frame of our little dependance we’d never have spotted him in a million years. In fact, in over 11 years of living here, this is only the second one we’ve seen! 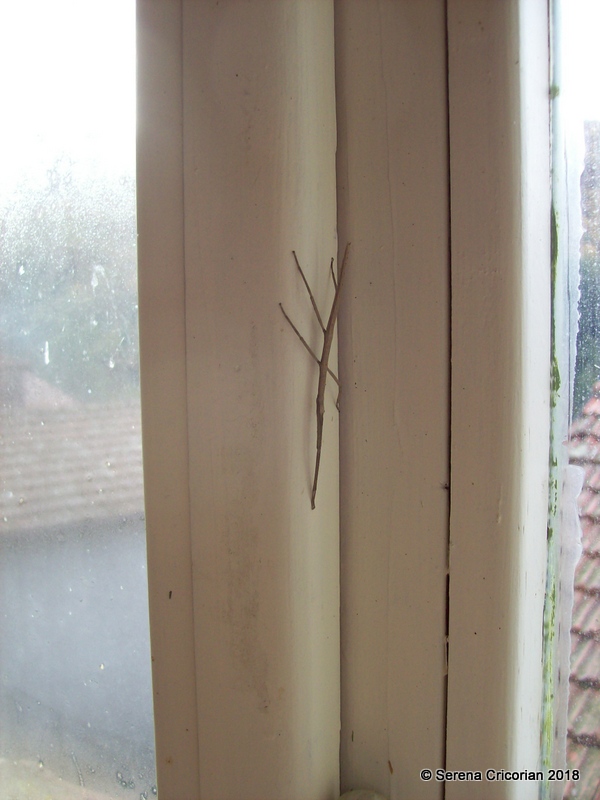 Not a twig but un insetto stecco!

Of course, there are many many more insects that I haven’t mentioned, and my apologies go out to them. Sorry insects, but this is just a simple blog, not an encyclopaedia!