Zero Kilometres Posted by Serena on Nov 22, 2018 in Culture

Here’s an irony: in an era of rising nationalistic sentiment, in which immigrants are increasingly regarded as unwelcome intruders, we seem more than happy to import all of our goods from the other side of the planet!

During a recent visit to the UK, for example, we wanted to buy some garlic. Now, the medium sized town where I grew up is located in the large agricultural region of East Anglia, and yet there’s not a single greengrocer left in town. In order to acquire our humble bulb of garlic we had to visit one of the many anonymous out of town supermarkets that, over the last couple of decades, have gradually killed off the small family run businesses of yesteryear.
And our single bulb of garlic came wrapped in a plastic net (ma perché, l’hanno pescato dal mare?), with a plastic label attached to it which read ‘Imported from the People’s Republic of China‘. Cosa!?

Here’s where the concept of chilometri zero comes in. Chilometri zero, also known as chilometro zero, or Km zero, was initially launched by Coldiretti (an abbreviation of Coltivatori Diretti) in the Veneto region with the aim of convincing chefs, administrators of school or works canteens, and restaurant chains to use local seasonal produce rather than that imported from around the planet. Some of the most important aims of this concept are: to promote and support local agriculture, to minimise transport distances, hence greatly reducing carbon emissions, to provide better quality produce at reduced costs to the consumer. Added to this, many local producers also guarantee that their produce is ‘bio‘ (organic, or unadulterated) as opposed to much of the global produce found in supermarkets which often has little to no certification. 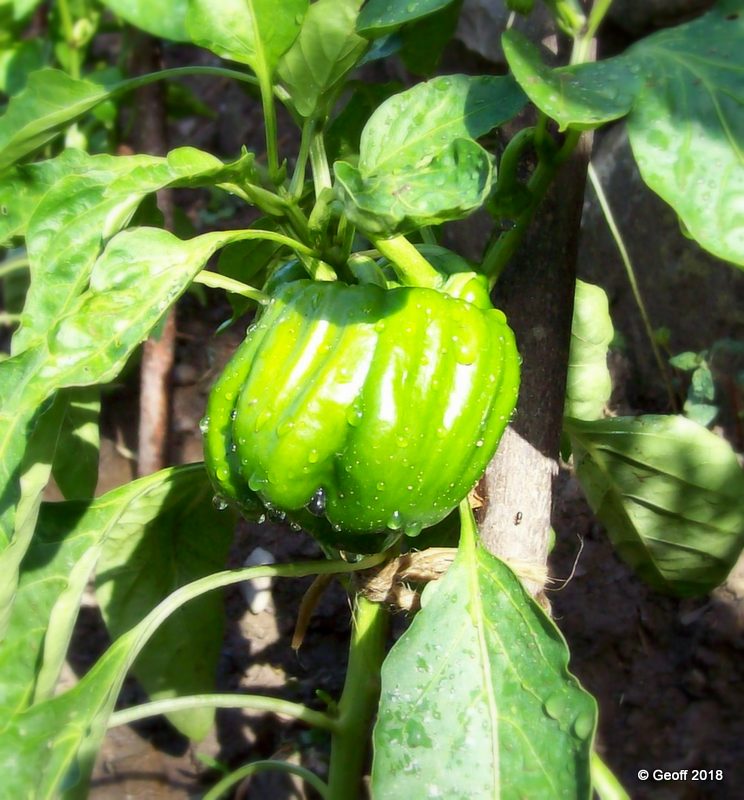 Peperone chilometri zero.
This one we grew ourselves, so it travelled just a few metres from our garden to our kitchen!

Here in our home town of Pontremoli, we’re lucky in that we still have many small family-run shops such as il fruttivendolo (the greengrocer), il panettiere (the bakers), il pescivendolo (the fishmonger) e il macellaio (the butchers). What’s more, we are also fortunate enough to have our own little mercatino Km zero.

Mercolodì e sabato (Wednesday and Saturday) is market day here, and tucked in alongside the usual range of stalls there are two little ones selling frutta e verdura (fruit and vegetables) grown on local farms, and a third that sells formaggio squisito (exquisite cheese). Unlike the grocery section in your typical supermarket, all the produce is seasonal: yes folk, no strawberries for Christmas, although you’ll find plenty of pumpkins!

I sometimes wonder if people even remember what seasonal means anymore. We’re become so accustomed to buying what we want all year round without questioning its provenance. Unlike the deal with the ubiquitous global mass market, when you buy km zero you’re buying directly from the producers, hence no middle man! These local farmers tend to be friendly, and proud of their produce. They present it professionally in attractive wicker baskets, and if you ask them a question about what they have to sell they know what they’re talking about … because they grew it!
La loro frutta e verdura sono biologiche (their fruit and vegetables are organic), and come, therefore, in all shapes and sizes. Nothing is wrapped in plastic or artificially waxed and polished to appear more attractive. Buying from them is a personal experience, e non c’entra nulla con le code stressanti e anonime dei grandi supermercati (and has nothing in common with the stressful and anonymous queues of the big supermarkets).

The fact that the produce is seasonal forces you to be creative: last week we bought the final few peppers of the year, and the first cavolo verza (savoy cabbage). This is the season of the brassica, so besides il cavolo verza you’ll find il cavolfiore (the cauliflower), il cavolo cappuccio (the green cabbage), le cime di rapa (the turnip tops), and i rapini selvatici (the wild turnip tops). The other omnipresent vegetable right now is la zucca (the pumpkin), with its wide variety of sculptural shapes and typical autumnal colours.

Il banco del formaggio (the cheese stall) sells cheese made from the milk of the very sheep which we see grazing in the pastures at Teglia just outside town. They sell a variety of pecorino (sheep cheese), which undergoes different manufacturing processes and types of maturation. There’s a wonderful mature pecorino, for example, which is covered with a crust of the straw in which it is stored until it’s mature. What’s more, the flavours of il formaggio change throughout the year because the pastures upon which the sheep graze change with each season, thereby affecting the flavour of the milk.

The ‘limitation’ of only having seasonal produce available brings a sense of being in touch with the rhythms of Nature, as well as knowing that what we eat is really fresh, and has not been in a cold storage container for months. What’s more, we know that we are helping the local community rather than the big greedy multinationals che non se ne fregano un fico secco di noi piccoli pesci!

Do you have something like the chilometri zero system where you live? Please share your thoughts and experiences.