La Ricreazione Posted by Serena on Aug 31, 2017 in Uncategorized

Do you know the Venetian artist Giovanni Bellini (1430-1516)? Well, today I want to tell you about my favourite Bellini painting: l’Allegoria Sacra, housed in the Uffizi Gallery in Firenze. 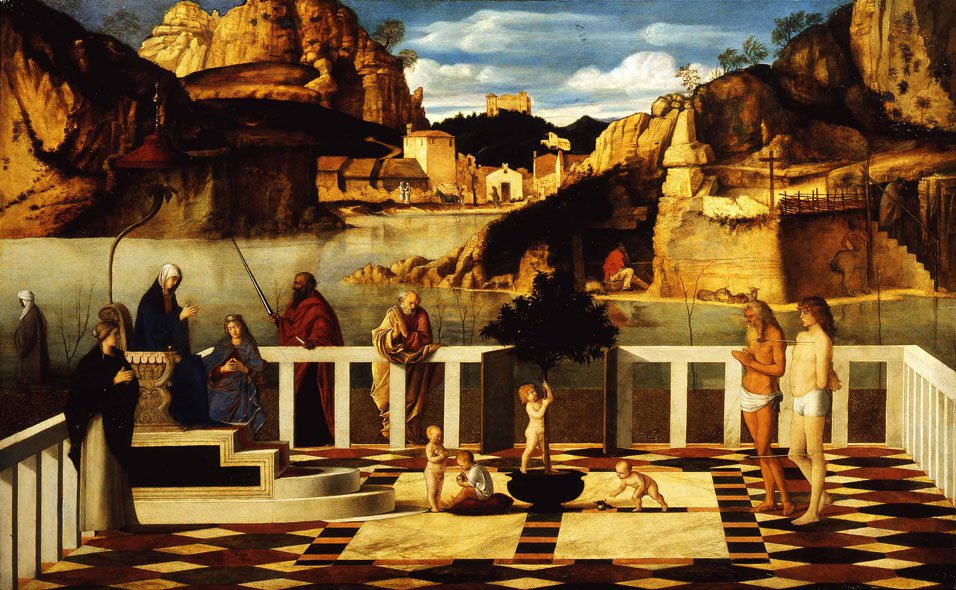 I’ve always been intrigued by this painting’s surreal juxtaposition of interior architecture and landscape, and the positioning of the characters in small separate groups, with wide gaps between them. It defies the traditional formula for this type of religious painting in which everyone is crowded around the central figure of the Madonna and Child.

In fact I find its unorthodox composition quite fascinating. The Madonna, for example, is seated in profile on a throne to the left side of the ‘stage’, whilst Baby Jesus is playing with a group of cherubs around a small tree in the centre of the painting. Or at least that’s my interpretation.

Furthermore, although the painting is filled with traditional religious characters and symbolism it seems to have an unusual sense of ‘casual’ everyday life about it. Look at the two figures to the right, for example. These are probably San Sebastiano, with his body pierced by arrows and his arms tied behind his back, and San Onofrio. But rather than standing stiffly in adoration of the Madonna they appear to be wandering around having a chat!

Over the centuries experts have proposed various interpretations of this very enigmatic painting without coming to any definitive conclusion. However, I recently came across a new ‘lateral reading’ by art historian Vittorio Sgarbi which I really like because it seems to reflects my own amateur intuition.

Sgarbi calls this painting ‘una ricreazione‘ (a break/rest period). He says that Bellini painted the religious figures as if they were actors taking a rest while waiting to be summoned by the director. Once the break is over they’ll reposition themselves: the Madonna will hop back on a throne at centre stage, Baby Jesus will leap into her lap, the three angels cluster around Maria’s feet and the six saints will position themselves symmetrically to each side of the Madonna. The whole composition will then be tucked beneath the traditional ‘pagoda’, whilst the landscape and its symbolism will be flattened neatly into the backdrop.

Could it be true? Who knows! But this is the interpretation of maestro Giovanni Bellini’s ingenious painting that I prefer. And in the end, it’s the relationship between the work of art and the viewer that really counts, don’t you think?