L’Etimologia della Pasta Posted by Serena on May 9, 2011 in Italian Language

I thought it would be fun to have a look at just a few of the innumerable varieties of pasta that we produce in Italy, and to discover where they get their names from. Click on the images below to enlarge them. 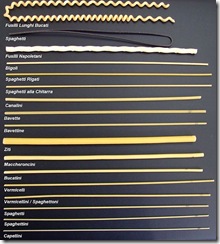 Even thinner than spaghetti are i capellini, from the word capelli = hairs + the suffix ‘ini’ = ‘little hairs’. The full name of this pasta is capellini d’angelo – ‘little hairs of an angel’

Fat spaghetti, or spaghettoni, are called vermicelli from the word vermi = worms. It’s probably best not to think about the name whilst eating them!

The fat spaghetti with a hole through the middle are called bucatini, from the word bucato = holed + the suffix ‘ini’ = little holed

Let’s move on to the next group: 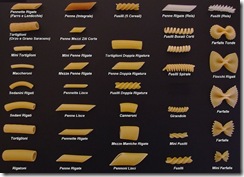 Penne take their name from quills, the feathers which were once dipped in ink and used for writing. The English word ‘pen’ shares the same root

Fusilli take their name from fuso, the spindle used by spinners. In fact fusilli were originally produced by twisting them around a fuso to give them their spiral form

Farfalle means butterflies, and if you have a look at them it’s easy to see why! You’ll also notice the similarly shaped fiocchi rigati, literally ‘lined bows’

In this group we have: riccioli = curls, torchietti – which resemble the screw of a torchio (winepress), and gemelli = twins, which are composed of two pieces of pasta joined together in a spiral 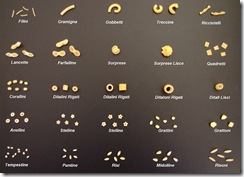 This group contains all the smallest pasta which we use when making la minestra (soup). This type of pasta is called pastina da minestra. Here you will find: filini = little wires, lancette = little spears, anellini = little rings, stelline = little stars, and ditalini which comes from the word ditale = thimble, which is itself derived from dito = finger 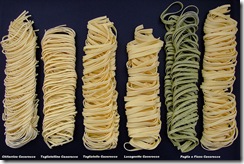 The etymology of the word lasagne is obscure, and there is a lot of controversy about its origins

There are, of course, many more types of pasta to explore, but perhaps knowing that the next time you eat in an Italian restaurant you may be offered ‘little pieces of string’, ‘butterflies’, ‘sea shell’, or ‘little worms’ will add a special ‘divertimento’ to your meal.