Masaccio’s Holy Trinity Posted by Serena on Feb 25, 2015 in Uncategorized

After a long day spent wandering around the narrow tourist packed streets of Florence, I usually try to make a quick visit to the church of Santa Maria Novella before catching the train. I like its elegant facade, designed by Leon Battista Alberti in 1470, and besides, it’s always so quiet in there, a moment of respite before throwing myself back into the crowds at the nearby railway station and the noise and smells of the train journey home. 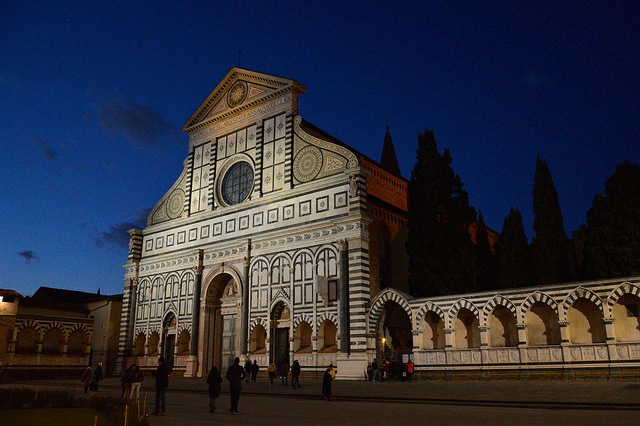 I usually wander around inside the church for a while, before stopping in front of Masaccio’s fresco la Trinità (the Holy Trinity), painted in 1426. I sit down on a pew and try to take in the whole painting: its architectural background and the geometrical simplicity of its construction.

According to some art historians, the architectural background is an homage by Masaccio to the genius of Filippo Brunelleschi (1377-1446), the architect who built the cupola of Santa Maria in Fiore and many other monuments in Firenze, including the church of San Lorenzo and lo Spedale degli Innocenti. However, according to tradition, the architecture of the fresco was designed by Brunelleschi himself. Whatever the truth is, I like it, because it gives me the impression that I’m looking through an opening in the wall into another real church, so convincing is the perspective.

Then there are the figures that form the composition: so few, yet so powerful in their blocky shapes and colours. They are enclosed by a perfect triangle that has its apex at God’s head and its base beneath the two kneeling figures. The triangle contains a hierarchy: within the main architectural area which takes the form of a chapel, we find the Holy Trinity, with God placed at the top, followed by the Holy Spirit in the shape of a dove, then Christ beneath. Below the Trinity, but still within the sacred space, are the Madonna to the left and Saint John to the right. At the very bottom of the fresco, placed outside the main sacred area, we see two human beings, the patrons of the fresco.

There’s one figure in particular that always attracts my attention, la Madonna: she seems to look me straight in the eyes as, with a simple gesture of her hand, she invites me into the picture.

La Madonna, or is it. Sig.ra Bianchi?

But wait, something’s wrong. I look more closely at her face with its strong harsh features. It’s a familiar face … and finally I realise that it’s the face of Sig.ra Bianchi, that friend of my mother’s who was a mystery to me when I was a child. She always wore a knee length coat and a head scarf, no matter the season. I remember standing in the corner of a room as far away from her as possible, feeling intimidated, and wondering whether she was really human or a member of some strange unknown species.

And even now after so many years, whenever I go to Firenze I can’t resist popping into Santa Maria Novella to check that she’s still there.