Our Italian Olive Harvest Posted by Geoff on Nov 23, 2016 in Uncategorized

November through to December is the period in which la raccolta delle olive (the olive harvest) takes place here in Toscana, and 2016 has turned out to be the year of our first ‘real’ olive harvest, even if on a fairly humble scale, as we were to find out.

For the past few years we’ve been able to collect several handfuls of olives from the young trees that we planted on our terraces. The olives dalle nostre parti (where we live), however, are not for eating, but for pressing to obtain oil. Serena has had some success at conserving the relatively minuscule quantities that we’ve collected in the past, but it’s turned out to be rather tedious process in which the means hardly seems to justify the end. 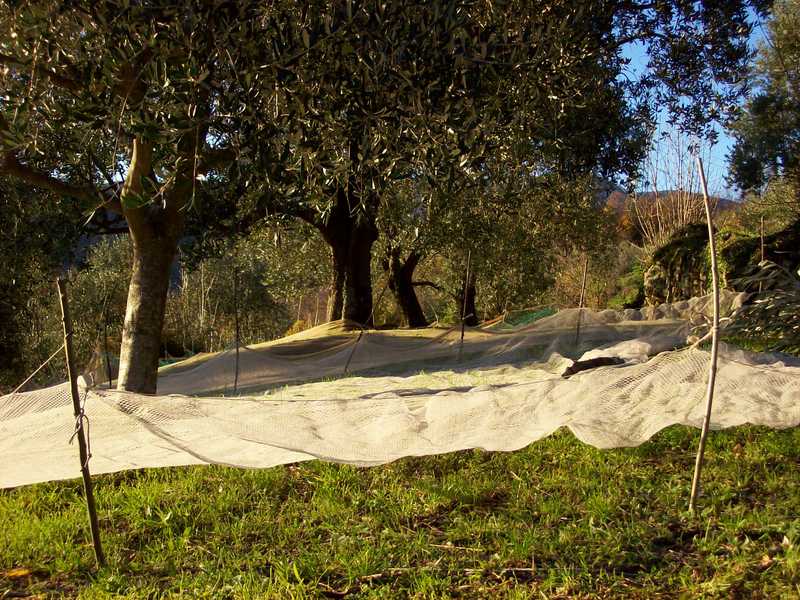 Nets spread beneath a neighbour’s olive trees ready from the harvest. Photo by Geoff Chamberlain

At this time of year the ground under the olive trees has to be kept clear, so the grass and weeds are cut with a decespugliatore (strimmer/brush cutter) or a falce (scythe). Once this is done, large nets are usually spread beneath the trees, making it much easier to collect the olives.

As we’ve never had many olives until now, we don’t have the appropriate nets, so we’ve had to improvise with some old sheets that we usually use when decorating the house.

There are four main methods of harvesting olives:

We used the first, la brucatura, which means picking them by hand. This is undoubtedly the best method in terms of the quality of oil produced because neither the olives nor the ramoscelli (twigs) are damaged. The downside is that it’s very time consuming. You can speed things up by using a kind of miniature rake to comb the olives off the branches into the nets below.

La bacchiatura is a method that involves beating the branches of the tree with a bastone (stick) or canna (cane) to make all the mature olives fall off. This is a good technique to use when the trees are too large to make hand picking practical. We may have to use this method next year as our two oldest trees are now getting quite large.

La scuotitura means literally ‘shaking’, from the verb scuotere (to shake). Here, special machines are attached to the tree trunks. These machines vibrate the whole tree, causing the olives to fall into the nets. This method would only really be used by big commercial growers due to the cost of the machinery, although it’s still cheaper than hiring a labour force to pick the olives by hand.

Finally, we have la cascola naturale, which is probably the least labour-intensive method. Here, the olives are left to fall into the nets in their own good time. Obviously, this method has its attractions, but the quality of the oil produced in this way is rather poor. 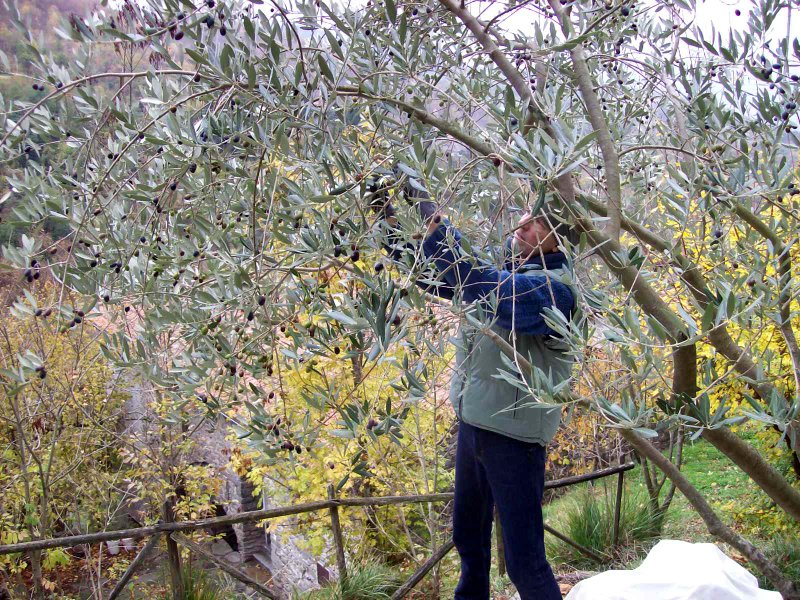 We were quite impressed when we weighed our olives and found that we’d harvested 15 kilos from our modest ‘orchard’. But il frantoio (the olive mill) put us in our place when we phoned to enquire about having them pressed: The minimum practical quantity for a pressing is 140 kilos, they told us!

So, it’s plan b.: combine our olives with those of a neighbour whose harvest will be considerably larger than ours. If we’re lucky, they say, we may even get one litre of olive oil from our 15 kilos of olives. Huh, no wonder the damn stuff’s so expensive!