“L’opera più audace e mirabile del medioevo in Verona” (“The most audacious and wondrous work of the middle ages in Verona”) is how historians describe il Ponte Scaligero (the Scaligero Bridge), also known as Ponte di Castelvecchio, the beautiful brick and marble bridge which spans the river Adige from the Torre del Mastio (Master Tower) of the Castelvecchio complex in Verona. 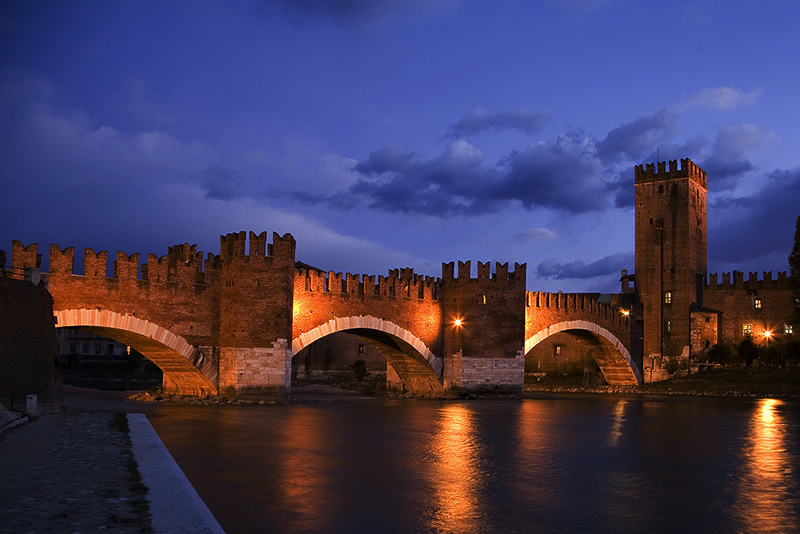 Ponte Scaligero was built over a period of three year, probably between 1354 to 1356 on the orders of the then lord of Verona, Cangrande II, and was intended as a personal escape route from the castle in case things got nasty, which they often did in those days! The architect’s identity is wrapped in mystery although a document from 1495 cites the name Guglielmo Bevilacqua. Whoever the designer was, they did a wonderful job. The base is constructed in marmo bianco e rosso (white and red marble) and the distinctive upper section with its mura merlate (crenelated walls) and feritoie nei piloni (arrow slits in the pillars) is in mattoni (brick). The three wide arches, the largest of which spans nearly 50 metres, a prodigious distance for those days, allow the bridge to resist the forceful current of the river Adige.

A legend tells that the bridge’s designer was afraid that he had been a bit too ambitious. On the day of the inauguration and removal of the supports he supposedly remained on the far side of the bridge armato di cavallo, in modo da poter fuggire velocemente nel caso il ponte fosse crollato (armed with a horse in order to make a quick getaway in case the bridge collapsed!). His fears were unfounded though, as the bridge endured almost unscathed for five centuries, resisting the ravage of time and the fiercest floods. Then in 1802 the French knocked down the tower on the left bank and filled in the distinctive crenelations on the walls. In 1824, restoration of the bridge began, initially with work to reinforce the weary main pillars, then ten years later the crenelated walls were ripristinati (restored) to their original glory. 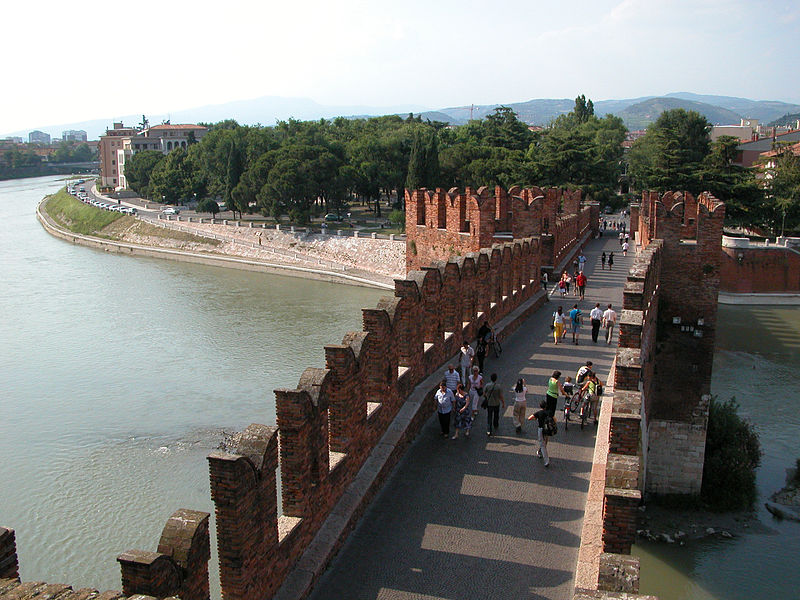 The medieval giant finally met its end on the evening of the 25th of April 1945 when retreating German troops completely destroyed it with explosives. Luckily for us though, we can still enjoy a visit to the beautiful bridge in Verona. Ponte Scaligero was meticulously reconstructed between 1949 and 1951 using solo le pietre e i mattoni originali, che i veronesi avevano recuperato dal letto del fiume (only the original stones and bricks which the people of Verona had recovered from the river bed).