Viva la Befana Posted by Serena on Jan 6, 2009 in Culture

“Epifania, tutte le feste si porta via” (Epiphany brings an end to all the festivities).

Epifania, a Latin word with Greek origins, means “(festival of) the apparition” or “manifestation (of the divinity)”. In the Catholic church the Epifania celebrates the visit of the Re Magi (the Wise Kings) to Gesu’ Bambino (Baby Jesus) on the 6th of January. In common speech however Epifania has been transformed into the word befana.

The Story of La Befana

Legend has it that on their way to Bethlehem, the Re Magi met an old woman, la Befana, and invited her to go with them to visit Gesu’ Bambino. As it was a very cold night the old woman decided against travelling with the Re Magi but to follow on instead at daylight. The following morning la Befana prepared a basket with some presents to take to Gesu’ Bambino, but when she arrived at the stable she found it empty, the Holy Family having fled to Egypt to escape the wrath of King Herod. Every year thereafter la Befana, full of remorse, travels far and wide on the night between the 5th and the 6th of January to leave a present for every child in the hope that one of them may be Gesu’ Bambino. 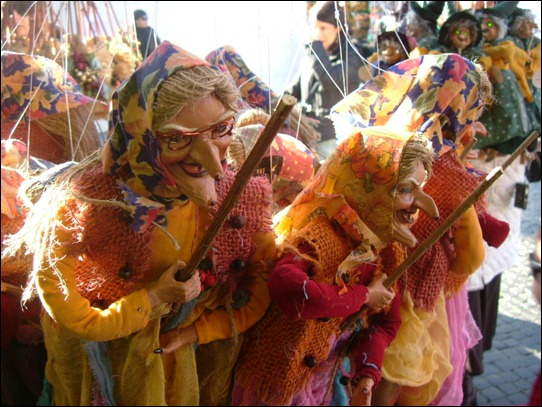 “La Befana vien di notte con le scarpe tutte rotte” (the Befana comes in the night with her shoes all broken) and leaves presents in the calza (stocking) that children hang near the fireplace or at the bottom of the bed. La calza della Befana (the Befana’s stocking) usually contains some cioccolatini (chocolates), torrone (nougat), noci (nuts), mandarini (tangerines), and a little present sticking out at the top. But “se il bambino e’ stato cattivo” (if the child has been naughty) then he/she will find il carbone della Befana (the Befana’s charcoal, which is actually a black colored rock sugar) instead of a present. When my older brother was 5 years old he had been very naughty over the Christmas holiday, and my parents decided not to give him a present but, as we lived abroad, they couldn’t get hold of any carbone della Befana, so they got some real carbone instead. On the morning of the 6th of January when my brother looked in his calza he was shocked to find a lump of charcoal. After a few speechless moments he turned towards my father with a big grin and said: “Guarda papa’, la Befana ti ha portato il carbone per la griglia!” (Look dad, the Befana has brought you the charcoal for the barbeque!).

Traditionally Italian children used to get presents only from the Befana at the end of the Christmas holiday and not from Papa’ Natale (Father Christmas) or Gesu’ Bambino. When we were older my mother told us that as a child she used to get very upset about only receiving her presents on the day before going back to school, having spent the whole of the Christmas holidays playing with her old toys. When she grew up and found out about Papa’ Natale, she decided to adopt his tradition so that when she had children they could enjoy their presents for the whole of the holiday. I would imagine that something similar has happened in most Italian families because these days every child gets presents both on Christmas day and for Befana! But despite the arrival of Papa’ Natale and Gesu’ Bambino, la Befana is still a deeply rooted Italian tradition, and when some years ago the Italian government decide to delete this festivity from the school calendar because they believed it was redundant, most Italian families refused to send their children to school on that day. After a couple of years the government had to give in and reintroduce la Festa della Befana.