Vending Machines – an Important Part of Japanese Culture Posted by eriko1 on Feb 24, 2022 in Culture, Food

What do you think many international visitors are most surprised and impressed with when visiting Japan? Combini (convenience stores). You guessed it. It has been well-known, but the Tokyo Olympics put the Japanese combini in the major international media. Another thing –  maybe vending machines (自動販売機 jidouhanbaiki). They are everywhere. I mean, everywhere. 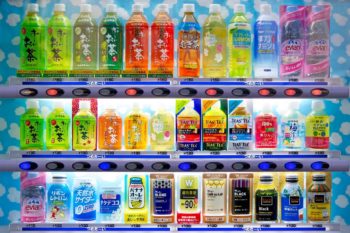 In 2020, there were over 4 million vending machines in Japan, which was a 2.4% decline from 2019, according to Ryutsu News. The revenue (売り上げuriage) that the vending machines generated in 2020 amounted to ¥5 trillion (US$43.6 billion). Just for comparison (比較 hikaku), although I could not find comparative data, the US had 7 million vending machines, the largest in the world. Yahoo finance reports the US revenue was approximately US$36 billion.  Japan has the highest number of vending machines per capita (一人あたり hitoriatari).

So why? Simply, it is convenient. You can buy a can of coffee, hot or cold, anytime you want and consume it. Vending machines have been evolving (進歩するshinposuru). There are vending machines that provide Wi-Fi to much-needed service to the Wi-Fi-deprived country, that give prizes, and that give hot and cold beverages/foods, that dispense toys and knickknacks, you name it!  Vending machines are everywhere – on the street corner of Tokyo, and on the farm roads through the rice fields. Also, it is fun to watch the vending machines that show you how your ordered item is being prepared – after all the Japanese love robots! I inserted money into a vending machine and chose a type of coffee. Then a video started on the vending machine – a video showing your cup of coffee being brewed. And it may sound strange, but I felt somehow more affection to the cup of coffee when I finally held the cup in my hand.  It was as if I watched its little life in a movie.

Some international media point out that the labor cost (人件費 jinkenhi) is very high in Japan,resulting in the popularity of vending machines. But I must oppose this theory. The Japanese average annual income (平均年収 heikin nenshu) is notoriously low. According to Heikinnenshu, the average income in 2019 was US$39,000 (), while the median income (年収中央値 nenshu chuouchi), which probably shows a more accurate picture, was US$24,000 – 31,000 based on today’s rate. It is a sad and upsetting fact that there is a vast salary difference between the genders. The median income for men amounted to US$27,000, while that of women was US$20,000. Japan ranked 14th in the global median income.

But the number of vending machines in Japan has been declining, mainly because of the stiff competition (競争 kyouso) with combini stores. They are open all the time, and they are also in many places providing more products and services. The continuing decrease in population is, of course, a supporting factor in this trend.  There are other reasons for the continuous decline; 1) heavy dependence (依存 izon) on beverages (飲料 inryo), and 2) the saturation of locations.

I believe, however, the vending machine industry will continue to evolve, not by quantity but by the quality. It is important to touch an important niche (隙間 sukima) area that has been getting so much attention. That is a vintage vending machine as Retro Jihanki (自販機 short for 自動販売機) as Japanese call it. There were YouTubers that had been uploading videos on places with retro vending machines. It has been increasingly popular thanks to nostalgia and better than expected tastes.

Here is one of such nostalgic vending machine paradises.

At these retro vending machine sites, hot dishes are made by the owners or local shops instead of large corporations – foods are prepared every day. If you do not go there early, you will most likely be met by “sold out” (売り切れ urikire) signs. Many of these vending machines are old, and many parts are no longer available.  So the machines are affectionately treated by both the owners and the customers.

My family has had a grocery store for 400 years – of course, it did not start as a grocery store, and it is no longer a grocery store. When it was a full grocery store, I remember my dad had to go to the store every day, even his day-off, to refill the vending machines. There are no automated machines after all.