Year of the Tiger – a year of Growth and Beginning Posted by eriko1 on Jan 22, 2022 in Culture, Traditions 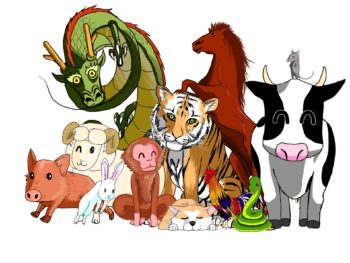 Why “boar” instead of “pig” in Japan? According to Edo no Biboroku by Michifumi Isoda, there were many wild boars in Japan, so there really was no need to domesticate (家畜化する kachikukasuru) pigs. There were some, but the introduction of Buddhism, which disapproved of eating meat, wiped out any need of pigs. Thus, when the Animal Zodiac came from China, “pig” was changed to boar.

Then Dragon – the only imaginary (想像上の sozojono) creature (生き物 ikimono) in the Animal Zodiac. Dragon is transliterated as 龍 (ryuu) or 竜 in Japanese. However, in Junishi, it is 辰 (tatsu). There are many different theories why Dragon was chosen. One of the theories is that it might have been supposed to be alligator (鰐 wani) because 龍 (dragon) also referred to 鰐（alligator.）Another theory is that Chinese people might have believed that dragons did exist.

Here are animals in Junishi

Here is the interesting folk tale how these 12 animals have been chosen.

You might have been asked by your Japanese friend, “what is your Eto?” Your friend is interested in your sign as Japanese love to associate the Eto/junishi animals to your personal character, just like we always ask people’s blood type (血液型 ketsuekigata). If you are born in a year of the Tiger, you are “brave (勇敢 yuukan), strong, passionate, a perfectionist, full of a sense of challenge, the love of being alone, and hot tempered.

Here is another use of Eto in Japan. If you know one’s Eto, you can easily calculate his/her age.  It used to be so easy for Japanese high school students to purchase alcoholic beverages even though there was a law against it. There was no system of carding.  But if you got caught (捕まる tsukamaru), there were consequences. So teenagers aimed themselves with some knowledge to lie (嘘をつく usowo tsuku) their age. Police officers would ask which Japanese year (和暦 wareki) you were born. You answered Heisei 30, for instance. Then the police officers would ask which western year (西暦 seireki) you were born. You answered 2018. You were  relieved – homework paid off (報われるmukuwareru). Then the police officers asked you what eto you were! If you could not answer, then you got caught!

Nowadays, it has gotten much harder for those who are under 20 years old to purchase alcoholic beverages. Some stores ask for IDs, but many stores have an age calculation chart with Japanese year, western year, and eto to ask customers to get their real age. 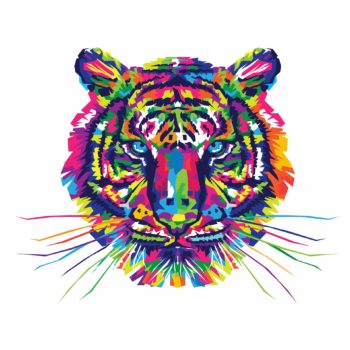 A year of the Tiger is characterized as a year of growth (成長 seicho) and a year of beginning (始まりhajimari). Let’s hope the prediction is the right one!