If you need to review subject markers and topics markers in the Korean language, please follow the link below to review them. 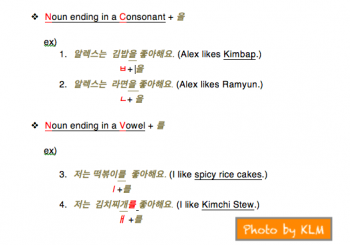 *One tip for you to remember about an object in the Korean sentence, unlike English, a Korean object is placed after a subject/topic and before a verb.

As I mentioned in the previous posts, native Koreans will understand you without these markers, however using these subject, topic, and object markers will help you to deliver your message in a clearer way.

If you need a little extra practice, please try to fill in the following blanks. Just don’t forget to follow these rules.

(Noun ending in a Consonant) + 을

Are you ready to check your answers?