“You Are Welcome!” in Korean Posted by Kyung-Hwa on Oct 3, 2018 in Korean Language, Vocabulary 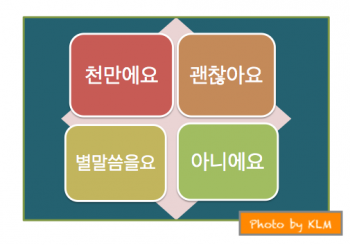 You can use one of the following examples as a response to “Thank you” in Korean.

This phrase is equivalent to “You’re Welcome!” in English, and you will often learn to say, 천만에요, as a reply to “Thank you” in Korean. Interestingly, this expression usually appears in written, not in spoken Korean. Instead of 천만에요, the following phrases are more frequently used responses to “Thank you” by native Korean people.

Korean natives generally say either 별말씀을요 or 아니에요 as a polite response to thank you. 별말씀을요 is similar to, “Don’t mention it,” in English. The speaker expresses that your thank is not necessary: it was not a big deal, and I was glad to do it.  아니에요  literally means,  “No,” or “No, it is not” in Korean. It might sound strange to your ears, 아니에요 is a polite way to respond to thank you in Korean. Figuratively, it is similar to “nothing” or “not at all” in English. If you need to reply to someone in a formal way, you can say, “아닙니다 [ah-nip-nee-da]”  instead of 아니에요 [ah-nee-e-yo].

These are also commonly used responses to thank you in Korean.

They literally mean, “It’s okay,” or “It is all right,” in English. 괜찮아요 is a polite form and 괜찮습니다  is a formal form to express “You’re welcome!” in Korean.

I hope the above list will help you show not only how to express your appreciatation to someone but also how to accept someone else’s gratitude or complement to you as well.