Note: This blog post is a companion to Unit XIII of our Introduction to Latin Vocabulary course. You can learn more about the course here.

A templum (temple) didn’t originally mean a building, but a place. Templa, in their earliest forms, were open spaces for worship. The ancient Romans (the really, really ancient Romans) practiced their religion outdoors, and even in later times thought that nature was sacred. Spirits were supposed to live in lakes, streams, rivers, and groves.

Eventually, the Romans built sacred buildings on their templa. (If we’re being precise, the building is an aedes, and the land it’s on is a templum, but the Romans themselves were rarely that exact). The form of their aedes was borrowed from the Greeks, and it continues to be imitated today. It was a rectangular building with a wide, sloping roof supported by massive columns, sitting on top of a broad podium with steps leading up to the entrance. Inside the aedes was the cella, a room where the statue of the god lived. No one was allowed inside the cella at any time. Outside of the aedes stood the ara, the altar, where the sacerdos (priest) performed ritual sacrifices. 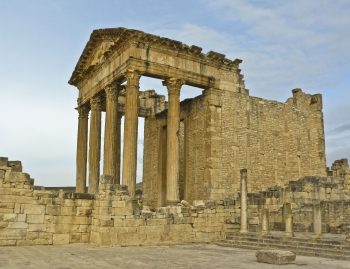 The first major temple the Romans constructed was the temple of Jupiter Optimus Maximus on the Capitoline Hill, one of the seven major hills in the city of Rome. The story goes that it was dedicated in 509 BC, the year Rome was founded, although this is so convenient that it’s probably not true. This temple was dedicated not only to Jupiter but also to Juno and Minerva, with each god in their own cella. Which brings us to… 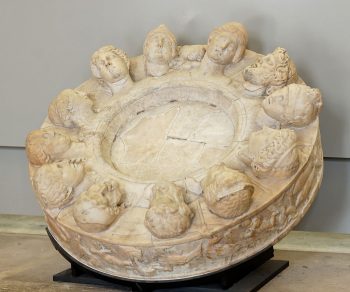 The Dii Consentes. Image by Jastrow from Wikimedia Commons. In the public domain.

The Romans believed that there were hundreds, perhaps thousands of gods, but they worshipped twelve above all. These were known as the Dii Consentes, and they were:

Jupiter—The king of the gods

Mars—the god of agriculture and later, of war

Venus—the goddess of love and beauty

Neptunus—the god of rivers, streams, the sea, and also horses

Apollo—the god of music and medicine, and later of the sun

Diana—the goddess of nature and the hunt, and later of the moon

Vulcan—the god of fire and metalwork

Vesta—the goddess of the home

Throughout the year, there were holidays celebrating these (and other) gods in various ways, but always with sacrifices. For example, during the Vulcanalia, in August, small animals were thrown into bonfires; during the Cerealia, in April, lit torches were tied to the backs of foxes, who were then let loose into the Circus Maximus. It’s not always very clear why these festivals were the way they were.

A relief of a Suovetaurilia. Image by Daderot from Wikimedia Commons, licensed under CC-Zero

There were also sacrifices on certain special occasions. The more special or important the occasion, the more spectacular the sacrifice. The biggest sacrifice was the suovetaurilia, which literally means the ‘pig-sheep-bull-thing’; you can probably guess what it was they sacrificed. This would be performed when a temple was rebuilt, or when the Romans were starting a new war.

Sacrifices didn’t always involve only the killing of an animal. In the ceremony called haruspicina, the priest would pull out the guts—usually the liver—of the sacrificed animal, and inspect it for clues to the future. The Romans had many ways of using animals, living and dead, to predict the future: watching where birds flew, or feeding chickens and seeing whether or not they’d eat. 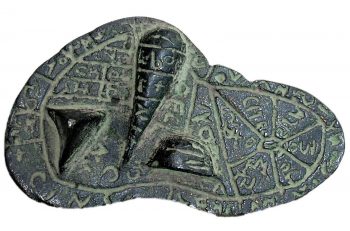 The Piacenza Liver, a training tool for haruspicina. Image by user Lokilech on Wikimedia Commons, licensed under CC-BY-SA-3.0-migrated.

When the Romans hoped for something they would, like many people, pray to a god to make it happen. If you wanted someone to fall in love with you you would probably pray to Venus; if you were a soldier in war you would most often direct your prayers to Mars. However, an interesting feature of Roman prayers is that they would often add a phrase like ‘…and whatever other gods are present.’ They thought that the world was full of gods, big and small, and it couldn’t hurt to pray to as many of them as possible.

These ‘little’ gods were called the indigitamenta, and they were literally everywhere and in everything. An early Christian writer, St. Augustine, counted no less than twenty-three indigitamenta involved in childbirth alone. There was a god of door-posts (Forculus), another one for hinges (Cardea), and another for the threshold (Limentinus). There were gods for hills, for protecting children on their way home, for ovens, for thorns, and for manure. There was even a god for the disease known as wheat-blight, which is a fungus that can wipe out crops. This god, Robigus, had a festival in his honor in which a red-haired dog had to be sacrificed and buried outside the city of Rome. 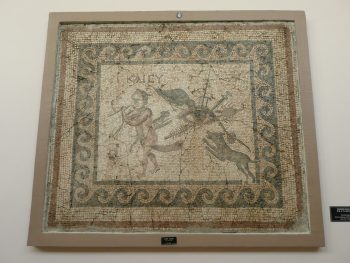 Their most common form of private religion is what we would call magic. The Romans were terrified of the Evil Eye (invidia), which is the idea that someone who wants what you have can put a spell on you to make you sure. They had all sorts of charms to block the power of the evil eye. Most of these charms were phallic—that is, they looked like penises. If you lived in ancient Rome, in fact, you would have seen buildings and houses covered in phallic symbols; not that different from today, maybe.

Some people took a proactive approach to magic and cast spells on other people before they could be cast against. Some of these spells are warnings—‘touch my stuff and your eyes will fall out of your head’—some are for revenge, and a whole lot involve getting someone to love you. For them to work (they thought) the magic spell had to be written on a piece of lead, rolled up, stabbed through with a nail, and then burned in the ground. You might pray to Jupiter for rain, but when it came to getting stuff done, everyone knew you had to take it up with the Underworld.

Some people needed more than holidays and magic spells. Roman religion gave names to the forces that controlled the world, but it didn’t provide meaning or comfort. For that, people turned to mysteria, which we call mystery cults today. The most famous of these cults were the Eleusinian mysteries, which were dedicated to Ceres. No one today quite knows how they worked—they were mysteries, after all—but what is understood is that people entering the cult would drink an unknown, possibly psychedelic drink, then enter a dark and crowded hall where they would be shown (probably with dramatic effects) the secrets of death and rebirth. The effect was probably to feel that one had gone down to the underworld and then come back.

Another mystery cult, very popular with soldiers, was the cult of Mithras. What exactly this cult was about remains a (haha) mystery, because no stories about Mithras survive, only images. And those images are strange: A man in a freedman’s cap being born from a rock, killing a bull, then eating that bull with the Sun, and finally riding a chariot into the sky. What any of this meant, nobody knows, but Mithraism was extremely popular until around the 4th century AD when it was overwhelmed by the growing religion of Christianity. 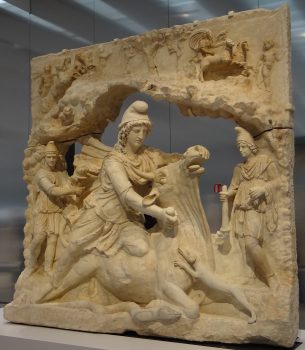 The Romans, understandably, were anxious people., Death and disease is scary stuff, even today, and before modern science, they must have been absolutely terrifying. People would fall sick and die without reason, crops would flourish one year and fail the next, childbirth was incredibly dangerous for both mother and child. There wasn’t much they could do about any of this, but make charms, sacrifice, and pray.

Ara—The altar for sacrificing animals outside a temple

Cella—The inner room of a temple

Indigitamenta—The minor Roman gods; there were hundreds of them

Haruspicina—The practice of telling the future from animal guts

Suovetaurilia—A sacrifice of a big, a sheep, and a bull