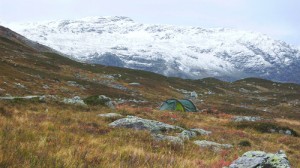 According to the late Norwegian singer and humorous writer Odd Børretzen, the first Norwegians were nuts: With istida (the Ice Age) coming to an end in Europe, do you think these sturdy fellows stayed to enjoy the sunny lands in central Europe? Nope, instead they followed the retiring is (ice) on its path nordover (northwards) to de ugjestfrie fjella (the unwelcoming mountains) of Norway-to-be, where kulda (the cold) and the sparse soil made life an uphill struggle… (Of course, the stereotypical nordmann – Norwegian – loves climbing hills and mountains!)

You’ll see those Stone Age pioneers got it right when you visit det norske høyfjellet – the Norwegian “high plateau” (literally: high mountain). With tregrensa (the “tree limit”) well below you, there’s only your friends and you, and lier (highland pastures) and daler (valleys) and fjelltopper (peaks) så langt øyet rekker (as far as the eye can see, literally “reaches”). The air is clean as spring water, and the enormous stillhet (silence) around you makes every heartbeat resonate. You’re very tett på himmelen (close to the sky/heavens) now, so take care that you don’t become too religious! 🙂

Om vinteren (in the winter) the høyfjell is like another planet where everything is white and alien. People go skiing on plains of snø (snow) so thick that you often glide past the uppermost twigs of trees, jutting out of the cape.

I påska (in Easter) høyfjellet gets a makeover as påskefjellet (the Easter mountains), and Norwegians are swarming on the high plains, as it’s often the only place where there is still snow. Sola (the sun) is really hot now and its stråler (rays) are reflected by the snow. Remember to dress lightly, even if there’s snow underneath you, and remember lots of solkrem (suntan lotion) and solbriller (sunglasses, shades). Otherwise, people will seriously think you’ve been vacationing in the Sahara! 🙂

Om sommeren (in the summer), when there’s only snow on the highest peaks, høyfjellet is popular among trekkers who often go from hytte til hytte (cabin to cabin). There are many cabins that are free for tourists to use.

Naturally, there is nothing quite as vakker (beautiful) as høstfjellet – the mountains with autumn hues at their feet.