Christmas Preparations in Norway Posted by Bjørn A. Bojesen on Dec 18, 2015 in Holidays, Traditions 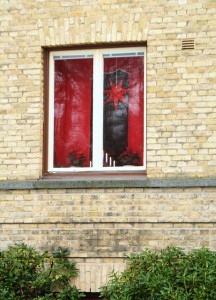 This photo is from Sweden, but Norwegian decorations are quite similar. Notice the electric candlestick with the seven candles making a ”bridge” – you’ll see it everywhere in Norway! (Photo courtesy of Blondinrikard Fröberg at Flickr, Creative Commons License.)

Førjulstida er travel! (The time before Christmas is busy!) In Norway, most people have lots of forberedelser (preparations) to make before jul (Christmas). All of a sudden, it’s 24. desember and julaften (Christmas Eve) is there! Har du kjøpt gavene dine alt? (Have you bought your presents already?)

Traditionally, a Norwegian housewife had to bake syv sorter (seven kinds) of Christmas småkaker (cookies, literally ”little cakes”). It was a kind of friendly competition between neighbouring families, and this do-it-yourself spirit is still very much alive in Norway! The syv sorter vary from region to region, but may include pepperkaker (”peppery cakes”), fattigmenn (”poor fellows”), krumkaker, sirupssnipper, bordstabel, kokosmakroner (”coco macaroons”) and smultringer! I don’t know a lot about cookie traditions in the English-speaking world, but at least smultringer are a kind of Norwegian donuts.

Then of course there is julerengjøringa (the Christmas cleaning). Since most houses in Norge are quite big, this may be an exhausting task! If you haven’t washed gardinene (the curtains) earlier this year, now is the time! Gulvet (the floor), vinduene (the windows) and maybe even veggene (the walls) and taket (the ceiling) need a lot of love.

Julaften itself also requires a lot of preparation. First and foremost – juletreet skal i hus (the Christmas tree ”must in house”). Most people buy a Christmas gran (spruce) in town, but some grab an øks (axe) and do-it-themselves i skogen (in the woods – remember, many places in Norway are a bit like Canada!) På Vestlandet (in Western Norway), some families prefer to have a Christmas furu (pine).

The final headache for busy families is julemiddagen (Christmas Eve dinner). Again, the ingredients change from place to place. In some regions pinnekjøtt is traditional, while people in other regions opt for ribbe or lutefisk. Nonetheless, all these preparations take a lot of tid (time)!