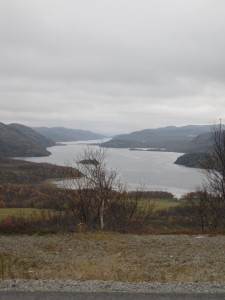 a view from the airport in Kirkenes

I returned yesterday from a 2 day trip in Finnmark, Norways northernmost fylke (county).  This was my first time north and east of Tromsø (in the north).  My friend who I accompanied warned me, ´det er ingenting å se deroppe, bare stein og rein´(there´s nothing to see up there, just rocks and reindeer).  He was correct for the most part, but I am still glad I went and got to see a different part of Norway that I had only heard about.  Just so you know, it wasn´t just a road trip we were on-my friend works for Ringnes as a refrigeration technician (reefer as they are called here-nothing to do with marijuana…) and is the only person in the company who travels to work in Finnmark.  Our destinations?  Alta, Lakselv, Karasjok, Kautokeino, and Kirkenes. 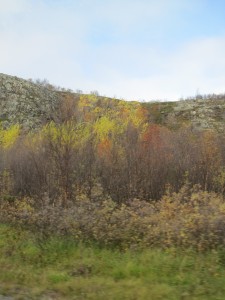 If you aren´t already familiar with Finnmark, I´ll tell you a bit about it.  As I said before, it is Norway´s northernmost fylke and actually the largest fylke as well.  Finnmark covers an area of nearly 50,000 square kilometers and is home to just over 72,000 people.  Although Finnmark is on the same latitude as Siberia, Greenland, and Alaska, the effects of the Gulf Stream mean that the areas along the coast of Finnmark enjoy mild winters, as opposed to inland Finnmark, where it can get extremely cold.

As my friend said, if you´re on a road trip through Finnmark, mostly what you see is rein and stein.  Finnmark consists of mostly vidda terrain-vast areas of rocky mountainous plateau where the Sami take the rein from the coast in September-October.  They remain there until springtime, when the Sami herd them to the coast again.  Surprisingly, and thankfully I might add, we didn´t see any rein at night when we were driving.  My friend said this was very unusual-we were lucky though because the fog was so thick we couldn´t see more than 15 meters in front of us and much further to the sides than the road lines.  We did see a few elg (moose) and hare however.  It wasn´t until the second day that we saw rein, lots of them.  They are not smart!  Almost every time we would see rein in the ditch or on the road, they would move in the direction of our vehicle.  I came to the conclusion that they are suicidal animals:)  No, I´m just kidding, but it was bizarre to see them hop from the ditch into the road and stop right in front of the vehicle. 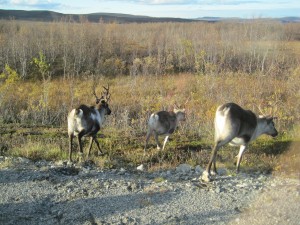 the only smart rein we saw-running away from the van

Although there was also not much to see, it was interesting to drive through Finland and Sweden to shorten our driving time getting from place to place in Finnmark.  The very northern part of Norway, as you know, veers off to the east, so it made more sense for us to take a snarvei (shortcut) several times through the neighboring countries.  We were never stopped by the border control which is a good thing because apparently people like my friend, who has a van full of tools, can get hassled about the reason for driving through.  We did most of the border-crossing at night when I seriously don´t think anyone was even in the office!

Sure was difficult to make sure we were on the right road when all the signs were in Finnish or Sami!  We never did take a wrong turn, thankfully, or we would have been quite lost with patchy cell phone service and thick fog.  There were several times we had to stop on the side of the road and snooze for a couple of hours during the night because our eyes could no longer function due to concentration on NOT hitting rein and seeing the actual road. 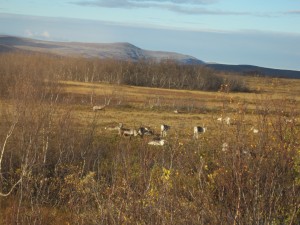 grazing on the vidda

The trip was a ton of fun, even though it was mostly spent in a car, or walking around with my dog when my friend was working.  Yes, my dog was along for the ride, and I mean RIDE-driving 140 km-hour up and down hills and around the windy roads was sure a rollercoaster for her! 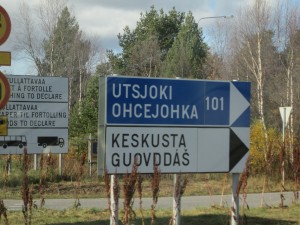