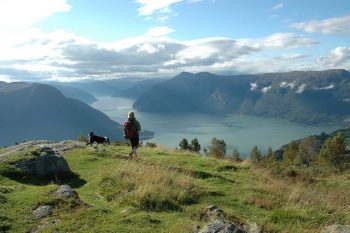 Ut på tur, aldri sur! (Out on a trip, never sulky!) Yes, Norway is sometimes a very wet and cold place. Still, most Norwegians and tourists agree the country has something very special – fjord og fjell (fjord and mountains).

When the Vikings were making poetry, they loved to pair words starting with the same letters. (This concept is called stavrim – ”stave rhyme” – in Norwegian, alliteration in English.) Fjord og fjell [fyore o-fyell] would fit right into a Viking poem! 🙂

Of course, den norske fjellheimen (the Norwegian highland, literally ”the Norwegian mountain home”) is thousands of years older than the Vikings. It’s even older than Alpene (the Alps), which is why Norwegian fjell aren’t so pointed as the peaks you see in Austria or France! Naturen (Nature) has had more time to ”polish down” the Norwegian ones. So, while the French Mount Blanc is 4.810 metres tall (!!), Norway’s highest mountain, Galdhøpiggen, ”only” reaches 2.469 metres into himmelen (the sky).

During istidene (the Ice Ages), huge breer (glaciers) were moving across Norway, crushing boulders to pebbles and carving out daler (valleys) and fjorder (fjords) in landskapet (the landscape). If you’re on fjelltur (a ”mountain trip”) and enter a really wide valley, that’s probably an U-dal [oo-dahl] – named after its shape. A really narrow valley is, you guessed it, a V-dal [veh-dahl]. Sometimes these valleys can be extremely long and even contain many pretty towns, such as the famous Gudbrandsdalen and Setesdalen.

Did you know a fjord is actually just an underwater valley? Just like the daler, the fjorder were carved out by busy and powerful glaciers. Fjords also come in U or V shapes – they just happened to be dug out below sea level, so they were quickly filled with salty water! (If you’re in doubt whether the water in front of you is a fjord or an innsjø – lake – just taste a drop. Fjords always contain a bit of salt!) Sognefjorden in Vestlandet (Western Norway) is the ”king” of Norwegian fjords. It’s 205 km long and 1308 metres deep at its deepest point, so make sure you can swim and wear a good lifejacket before you go boating! 🙂

A flat highland area is a vidde – as in the name Hardangervidda, Norway’s biggest national park…

Before you follow the Call of the Wild, make sure you have

The Norwegian Trekking Association (Den Norske Turistforening) has a really nice webpage where you can find all the information you need about trekking routes and even highland hytter (cabins) which everyone can use! 🙂