Gun politics in Norway Posted by kari on Aug 17, 2010 in Culture, Nature, Traditions 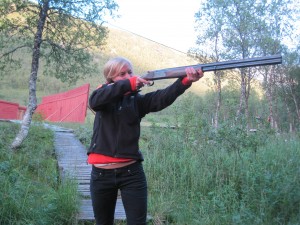 The reason this topic is on my mind is because I was at a skytebane (shooting range) the other day in Tromsdalen, just across the bridge from Tromsø.  A friend saw the patch I received for completing firearms safety training in MN and asked if I´d like to try myself at leirduer (clay pigeons) here.  Ja, gjerne (yes, please).  I had actually only shot a hagle (shotgun) once or twice before, so I wasn´t expecting to impress anyone.  I´m still just a novice, so shooting still targets with a gevær (rifle) is much easier for me than shooting moving targets 🙂  If you don´t know the difference in shooting techniques, with a hagle, you don´t aim like you do with a gevær; you sort of just point in the direction and hope that one of the pellets from the shot will hit your target).

After a bumpy ride down a horrible road i fjellene (in the mountains), we reached our destination.  I of course didn´t have a hagle, but that was no problem.  There were at least a handful of hagler for me to choose from to borrow from the skyteklubb (shooting club).  The only thing there besides 4 or 5 sections to shoot from, 5 platforms in each section, was a little hytte (cabin) with a few sofaer (couches), and a couple låskasser (locking cabinets).  There is a small veranda with benker (benches) outside that people can relax on and ta en kopp kaffe.  You can buy ammunisjon there and of course pay for your targets.  50 shots cost me NOK 120 (so between 15 and 20 US) plus the leirduer, which were NOK 80 for 50.  I didn´t think that was so bad considering it´s Norway and I didn´t have my own hagle.

I will fully admit right now that I hit 1 out of the 50 leirduer that I shot at.  Yes, you read right, ONE.  I told you I had only done this once before and I am much more comfortable shooting at still targets.  I just need a lot more practice.  Half way through I told my friend that I would be happy if I got one, and towards the end of the 50 I got one, so I left with a smile on my face.  The most frustrating part of the experience was that I was told by 2 different men who are members volunteer to work there told me I have a perfect position, or stance.  I asked them if they could look at me and critique my stance and then watch me shoot.  They were more than happy to do so and I was very grateful-very sweet, helpful guys.  Yep, after going through all the fundamentals of ´before the shoot´ they told me everything looked good and couldn´t actually tell me what my problem was once I pulled the trigger.  Looks like I´ll just have to keep practicing and getting used to the motions.

I had a really good time.  It was interesting to talk to the men who work there about the differences in gun politics in Norway and the U.S.  I showed them my orange MN firearms safety card that certifies that I passed the course and they thought it was so funny that the last of the ´10 commandments´of firearms safety found on the back of the card is

´avoid alcohol consumption,´ as if that shouldn´t be a given.  I had to chuckle too.  I explained that drinking and hunting is actually quite common and definitely a problem in the U.S.  Although I´m not sure of all the rules and regulations regarding jakt (hunting) and våpener (weapons) in Norway, I do know that it is more difficult to obtain guns in Norway.  In addition, the laws regarding age, how many of certain types of guns one person can have, etc. are more strict in Norway.  You actually have to apply through the police to buy a gun and you may be turned down if you don´t have a good enough reason to have one.  From the sounds of it, ´conceal and carry´is not on the agenda either 🙂