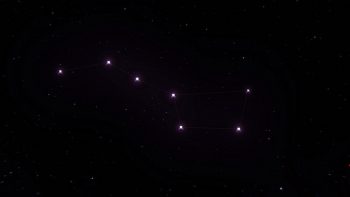 Liker du å se på stjerner? (Do you like watching stars?) Sommernettene er lyse i Norge, men snart begynner mørketida… (The summer nights are bright in Norway, but soon the dark time begins…) Here’s some star-spangled Norwegian for talking about stjernehimmelen (the starry sky). Use it with caution, though, so you don’t kill et romantisk øyeblikk (a romantic moment) with too many words. 🙂

Even when sola (the sun) is up and busy, you can sometimes see månen (the moon) above the Norwegian fjell (mountains). Of course, your chances are better after solnedgang (sunset) – and before soloppgang (sunrise) – when there are not too many skyer (clouds).

Most often the måne is halv [hahll] (half), but sometimes you get the honour of staring into the face of fullmånen (the full moon). (Can you see månemannen – the man in the moon?)

Across den mørke himmelen (the dark sky), you’ll probably be able to see the famous pale ribbon that gave its name to a chocolate bar: the Milky Way, which is Melkeveien in Norwegian. And everywhere there are skinnende stjerner (shining stars). Wait, was that a stjerneskudd (shooting star)? Fort, ønsk deg noe! (Quick, make a wish!)

Do you know any stjernebilder (constellations – literally ”star images”)? Norge (Norway) is a Northern country, so even Norwegians who are not a lot into stars usually know Karlsvognen or Karlsvogna (the Big Dipper). Yes, of course, it’s those 7 stars that look like a nice saucepan. 🙂

I always thought Karlsvognen meant ”Karl’s wagon”. Recently, though, I discovered that it actually means ”the man’s wagon” – and it was called so by vikingene (the Vikings)! If you draw a line upwards from the outer edge of the ”saucepan”, you’ll soon hit the big, bright Nordstjernen (The Northern Star). Now, you can find your way north – which isn’t bad in a country whose name originally meant North Way!

Fun fact: Morgenstjernen (the morning star) and Kveldsstjernen (the evening star) are actually both planeten (the planet) Venus, which shines really bright in horisonten (the horizon).