Norwegian Christmas TV Posted by Bjørn A. Bojesen on Dec 24, 2016 in Holidays, Traditions 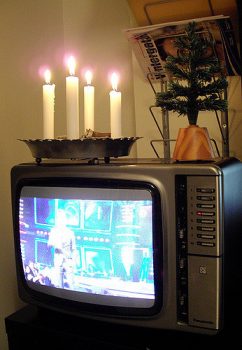 Norway is a country of many juletradisjoner (Christmas traditions). For decades, TV-titting [TEH VEH teetting] (”the watching of television”) has been an important part of jula (Christmas) for lots of norske familier (Norwegian families). Når hele familien samles (when the whole family is gathered) foran fjernsynet (in front of the television set), accompanied by some tasty julesnop (Christmas candy), everybody is able to kose seg (have a good time). Here are three Xmas time ”tv staples” in Norway:

• Even if it’s not so exotic for American learners, many Norwegian children are really looking forward to watching Disney-tegnefilm (Disney cartoons) on julaften (Christmas Eve)! 🙂 The traditional show is called ”Donald Duck og vennene hans” (Donald Duck and his friends). Of course, those friends include Mikke Mus (Mickey Mouse), Snipp og Snapp (Chip and Dale), Langbein (Goofy), and Pluto.

• Every evening from December 1st to julaften, a 24-episode julekalender (Advent calendar) is shown by a couple of Norwegian TV-kanaler (tv channels), including the ”national station” NRK (= Norsk RiksKringkasting = Broadcasting of the Norwegian Realm).   This year Norwegian barn og voksne (children and adults) have been mesmerized by Snøfall (”Snow Fall”), which is a fantasy story about Selma, ei lita jente fra Østlandet (a small girl from Eastern Norway). Selma’s parents have died, and she’s living a really dull life together with her dog and the strict woman Ruth. Then one day she finds a magical passage that leads her to the wonderful world of julenissen (Father Christmas)…

• A really special tv tradition is … Tre nøtter til Askepott (Three Nuts for Cinderella)! 🙂 It’s a Czech version of the Cinderella story, which was filmed in 1973. I have no idea how it happened, but for some reason it has become a fast julefilm (fixed Xmas movie) for really many Norwegians. The film is about poor Askepott who is in love with prinsen (the prince), who is supposed to marry a real princess… Of course, a little magic helps the two lovers, and alt går bra til slutt (everything finally ends well)! 🙂 You can watch the film – with the original Norwegian voice-over! – here.