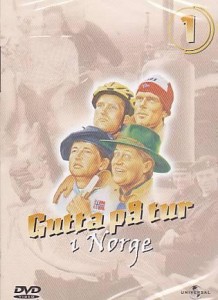 ”Gutta på tur” was a popular tv show a few years ago. The name means ”The boys on tour”. In official bokmål, it should’ve been ”Guttene på tur”. Plural ”the” forms of masculine nouns ONLY end in -ene in the standard language, but a word like ”gutta” is often heard in East Norwegian dialects (including Oslo).

Remember when we talked about Langfjella, the mountain range that causes the clouds to drop all their rain in Western Norway, leaving Eastern Norway a lot drier? Now, what kind of name is Langfjella really … it has an -a ending, so clearly it must be the ”the” version of a feminine noun, right? Well, not quite so. One of the most frustrating/fascinating things about languages is the fact that there’s always exceptions! In Norwegian there may be even more variation than in most other languages, as you’ve got loads of dialects and two official written languages (bokmål, the most widely used form, and nynorsk, which I promise to tell you something about in a while). Language is a political question in Norway, and there’s quite a bit of tension between those who think that the written language should be conservative and ”bookish”, and those who argue that it should rather be ”colloquial” and closer to the (spoken) dialects. Trying to appease both camps, Norsk språkråd, the Norwegian Language Council, has allowed some ”dialectal” forms with a-endings to enter the official dictionaries. You already know the feminine, so let’s look at the remaining ”a-words”:

Unlike the feminines in -a, the above forms are still felt to be quite ”radical” by many Norwegians. My piece of advice for you is, accordingly, just to continue using the most widespread forms (dyrene, kastet, har kastet). But at least now you shouldn’t be surprised when I tell you that Langfjella means … ”The Long Mountains”.

NB! The word barna has become the ordinary way to say ”the children”. Barnene is correct too, but much rarer.