Olympic Gold for the Norwegians Posted by Bjørn A. Bojesen on Feb 28, 2018 in Uncategorized 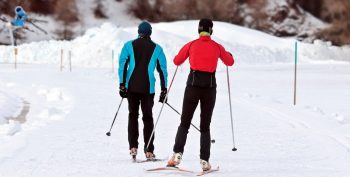 (Free picture from Pixabay; no copyright.)

For en glede! For en folkefest! (What a joy! What a celebration for the people!) Vinter-OL i Sør-Korea has come to a glorious end for the country known as skisportens vugge (the craddle of skiing). Rødt, hvitt og blått (red, white and blue – the colours of the Norwegian flag) totally dominerte seierspallen (dominated the podium) in Pyeongchang this February. De norske vinteratletene (the Norwegian winter athletes) just had their most successful OL (= Olympiske Leker, Olympic Games) ever, ever. With a total of 39 medaljer – including 14 gull, 14 sølv [serll] and 11 bronse – the Norwegians beat Tyskland (Germany, 31 medals) and Canada (29 medals), leaving their Nordic rivals Sverige (Sweden, 14 medals) and Finland (6 medals) far behind i skisporet (in the ski run).

Before we pop the champaign and throw all our norske flagg (Norwegian flags) high up in the air, let’s do a very quick recap. 🙂 Norway won medals all across the board, but especially tok kaka (”took the cake”, did great) in the classic ski sports. 14 medals were won by langrenn (cross ountry) skiers (including 7 gold medals). 5 medals (2 gold) were gained by skiers who fearlessly left the ground in skihopping (ski jumping).