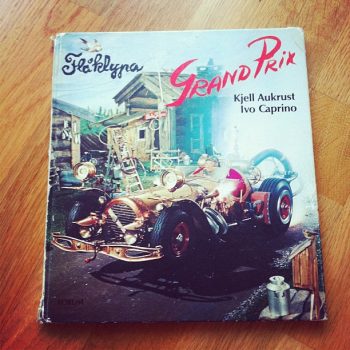 Is there a faster car, anyone? Il Tempo Gigante. (Photo Courtesy of Emil Overmar at Flickr, CC License.)

Did you know a Norwegian movie inspired Star Wars? After the last post about øvelseskjøring it’s time to highlight one of Norway’s biggest adventures of biler (cars) and kjærlighet (love) – Flåklypa Grand Prix (FLAWkleepah grannPREE)!

On the top of a fjellknaus (”mountain hill”) – where the morning sun rises above the Big Gorge (der morrasola renner opp over Storjuvet) – lives the sykkelreparatør (bike mechanic) Reodor Felgen. He spends his time making wonderful oppfinnelser (inventions) and talking with his two good friends, den gløgge (the bright) Solan and den treige (the slow) Ludvig. Then one day as the three watch fjernsyn (television) they discover that Reodor’s former apprentice Rudolf Blodstrupmoen is a very successful rally driver – with the help of a genius motor which was originally designed by Reodor! They decide to challenge Blodstrupmoen and his Arab sponsor in the billøp (rally) of the century… In order to win, Reodor has to make the fastest car ever known, ”Il Tempo Gigante”. It’s so hurtig (fast) that asfalten krøller seg (the asphalt curls) behind it!

Solan looks like a black and (duck) and Ludvig looks like a troll and yes, Flåklypa is a dukkefilm (stop motion movie with tiny models, literally ”doll film”). If you haven’t seen it yet, you should! 🙂 Since it was first shown in 1975, noone has been able to duplicate the excitement of the race or director Ivo Caprino’s fun characters. In fact, George Lucas admittedly based the pod race in ”The Phantom Menace” (Star Wars 1) very much on Flåklypa! 🙂

Flåklypa is the most watched Norwegian movie to date, and you can see it in many languages. Here is an English version. If you’re a hard core fan, though, you have to see it in Norwegian. The film is based on writings by the humorist Kjell Aukrust, and many phrases are in dialect and difficult to translate. All Norwegians know such classic quotes as Solan’s

Dra meg baklengs inn i fuglekassa! (Pull me backwards into the birdhouse!)