Driving with no Licence in Norway Posted by Bjørn A. Bojesen on Oct 19, 2016 in Uncategorized 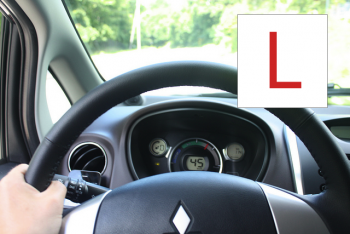 Whenever somebody is doing øvelseskjøring, there’s a sign with a red L in the rear window. (Image manipulated by me, using a photo kindly provided by Norsk Elbilforening at Flickr, CC License.)

Have you ever been driving behind a really slow car with a red L in the rear window? If it was in Norway, it meant that the driver in front of you was doing øvelseskjøring! The word means ”practice driving”, and as far as I’m aware, the thing only exists in Norway…

Det er veldig dyrt å ta lappen i Norge. (It’s very expensive to get a driving licence in Norway.) In fact, i gjennomsnitt (on average) people spend 30.000 Kroner to obtain a førerkort (licence – also called ”lappen”, ”the slip”). That’s about 3600 US dollars! And if you’re one of those Norwegians who happen to live in grisgrendte strøk (sparsely populated areas), where the nearest shopping mall or hospital may be hours away, you’ll have a hard time getting around uten bil (without a car).

So, to make people a little less dependent on expensive kjøretimer (driving lessons) with a kjørelærer (driving instructor), the Norwegian government, way back, made it possible to practice driving with somebody who’s not an official instructor (like a parent or a friend). If you want to øvelseskjøre (”practice drive”), you must

The person sitting in passasjersetet (the passenger’s seat) next to you in førersetet (the driver’s seat), must

• ha førerkort (have a driver’s licence)

• havde at least 5 years of erfaring (experience) as a driver (of that particular kind of kjøretøy, vehicle. There are different groups – I don’t really know the details here…)

So, the next time you find yourself trapped behind that red L, be a little patient before you tuter med bilhornet (honk your horn)! The Norwegian landskap is too beautiful for road rage, anyway. 🙂