Travel with Pets to Norway Posted by kari on May 5, 2010 in Culture, Norway and the world 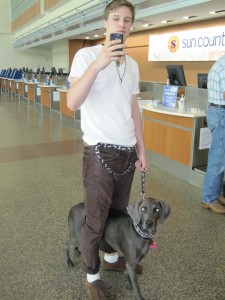 right before the 15 min. barking session in the crate being handled by strangers

Have you ever thought about traveling to Norway and want to bring your husdyr (pet)?  I have and so I’ve done some forskning (research) and even for those of you who haven’t thought about it, you may find it interesting.  Regler (rules) and reguleringer (regulations) always tell you something about a country or a culture.  After hunting around and asking different  myndigheter (authorities)  spørsmål (questions), I was directed to the USDA for informasjon regarding specific krav (requirements) for bringing husdyr to Norway.

There is only one institution that is permitted to do the rabis (rabies) prøve (test); blod (blood) will be drawn from your husdyr and sent to Kansas State University for testing.  Very specific instructions.  Eieren (The owner) must accompany the husdyr.  Husdyret must have a microchip of international standard to identifisere (identify) it.  The microchip is also used to store data about vaksiner (vaccines) and other helsevirksomheter (health concerns).  If it is the første gang (first time) the husdyr is travling to Norway, you will need to get a veterinærattest (veterinary certificate) that provides informasjon about vaksiner and such.  As suspected, supporting dokumentasjon must accompany it.  If the husdyr has traveled to Norway before, it should have a pass (passport) that can be stemplet (stamped).  It’s kind of morsomt (funny) to think about a husdyr having a pass, ikke sant?  It makes sense, though, considering the potential for sykdommer (diseases) and I suppose, terroristtrussler (terrorist threats).  Fortunately, husdyr coming from the US, assuming they meet all of the krav, no longer have to settes i karantene (be quarantined).

Many airlines allow husdyr to travel onboard, whether it is in the cabin, as checked baggage, or as cargo.  Kasser (crates) must meet the standarder (standards) of each respective airline and the priser (prices) can be steep.  Norway is a pretty husdyrvennlig country, as far as I have observed.  There are many hoteller that allow husdyr, although they may charge a cleaning fee.  As in most places, some leiligheter (apartments) allow husdyr and some do not.  It is important to check with the hotel, airline, apartment complex, etc. to see if husdyr are allowed and what you need to know beforehand.

See here and here for more detailed information about bringing husdyr to Norway.   This is a link to den norske veterinærforening (The Norwegian Veterinary Society). 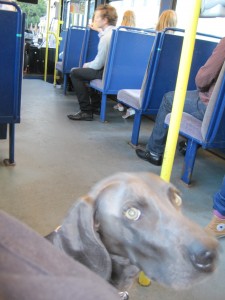 Stella on the bus in Oslo 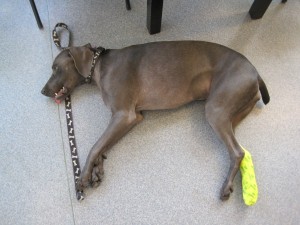 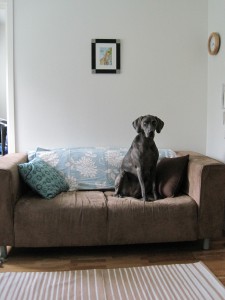 Stella posing in my apartment