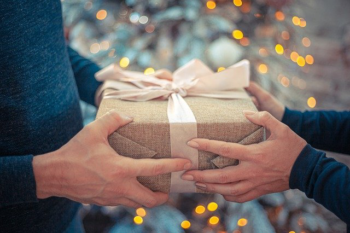 Jula er ei tid for gaver og kos. (Christmas is a time for gifts and cosiness!) Have you bought all your presents yet? While many of us are still pondering to whom to give what, let’s look at the Norwegian grammar of giving.

The Norwegian verb å gi [aw yee] is historically related to the English to give. Fortunately, it works in similar ways.

Jeg vet ikke hvem jeg skal gi presangen til. (I don’t know to whom to give the present.)

Hva skal du gi til pappa? (What are you going to give Dad?)

Dere gir meg ikke noe valg! (You guys give me no choice!)

”To give” is a great verb, because as all you grammar geeks know – it takes two complements! Look:

The ”whom/what” complement1known as the direct object usually appears after the verb: Jeg elsker kake! (I love cake!) In the Viking age, both Norwegian and English had a special case for this, called the accusative. You can still see it in some pronouns, which is why you are sometimes free to shuffle sentences with pronouns: Myggene liker meg. (The mosquitoes like me.) > Meg liker myggene. (Me the mosquitoes like.) Now imagine if all words had cases and shuffle you could around everything. 🙂

This leaves one big question: What about the to whom complement2known as the indirect object? Unfortunately, we’ve left the Viking age long ago and the pronouns don’t help, as the so-called dative pronouns of 2020 are identical to the accusative pronouns discussed above:

De savner henne. (They miss her.)

I hope you see the pattern. As in English, the to whom complement can either appear squeezed in between the verb and the ”whom/what” complement – OR it can appear after the word til (to), usually at the end of the sentence.

And the second: Alle ga gaver til barna. (Everybody gave presents to the children.)

When to use which? There are no good rules here, but it seems to me that the first kind of structure (I-give-you-hugs) is more common with pronouns like ”you” and ”me”. The second type (I-give-hugs-to-my-good-friend) is more common when the recipient is represented by a noun or several words. But follow your gut feeling, as you’do in English. When it comes to giving, grammar can only give us clues (clues to us?)

Takk for laget så langt! (Thanks for the company so far!)