What’s Up with Norway and Vikings? Posted by Bjørn A. Bojesen on Sep 30, 2020 in Uncategorized 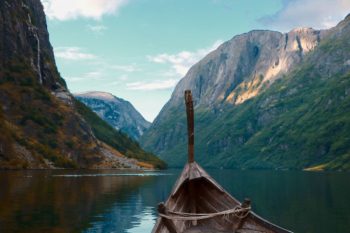 I don’t know if the TV series Vikings created a lot of Norwegian learners. Still, since it first aired (2013), many people around the world have become curious about the fierce Scandinavian warriors. No, you can’t chat to them. But 2020 Norwegian wouldn’t be there without their input, so let’s revisit vikingene.

(I should say that I often freelance about Vikings elsewhere, so I have lots of background knowledge here! 🙂 )

Hva er en viking? (What is a Viking?) Basically, a Viking was a pirate from Scandinavia more than 1000 years ago. The earlier Scandinavians had mostly been homebodies – until somebody invented the smooth langskip (Viking longship) with seil (sail). This tech enabled the Scandinavians to sail to faraway lands and plunder (and trade – they weren’t savage all the time!) In 793, a Viking fleet attacked the English island of Lindisfarne. This marks the beginning of vikingtida (the Viking Age – which ended in 1066, when the Norwegian king Harald Hardrada died trying to conquer England the Viking way).

Hva er sammenhengen mellom vikingene og norsk kultur? (What is the connection between Vikings and Norwegian culture?) A lot, since Norway was one of the territories where Vikings lived! 🙂 Vikings spoke norrønt (Old Norse), which is the ancestor language of modern Norwegian. You can see the traces everywhere in the language, for example in weekday names – onsdag (Wednesday) actually means Odins dag (Odin’s Day), and torsdag (Thursday) means Tors dag (Thor’s Day). At the beginning of the Viking Age, Norway was split between different tribes (for example: the ryger of Rogaland and the horder of Hordaland). But according to legend, Harald Hårfagre (Harold Fairhair) defeated his opponents at the Battle of Hafrsfjord in 872 and united the tribes. For Viking sailors the coastline of the new country seemed to run northward forever – that’s why it was called Norðvegr, the ”North-Way”. From there, Norwegian Vikings crossed the ocean and left their imprint on England, Scotland, Ireland, Faroes, Iceland, Greenland and even Canada…

Hvor kan jeg lære mer om vikingene i Norge? (Where can I learn more about the Vikings in Norway?)

Some nice places to go: