Words for Well-Wishers Posted by Bjørn A. Bojesen on Apr 17, 2014 in Traditions 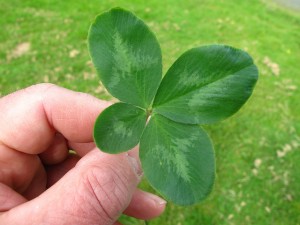 If you find a firkløver in Scandinavia, you’re bound to have lots of luck! (Thanks to Ole Husby at Flickr: https://www.flickr.com/photos/khianti/7438725780/in/photolist-bByAEb-ckkp9f-ckkq1L-6PGSsG [Creative Commons Licence])

Sometimes we use språket (the language) as a trylleformel (magical formula). Når noen nyser (when someone’s sneezing), most Norwegians will automatically react by saying prosit! [PROHsit]. In some strange way the little word changes the air, making the sneezer feel better. Below are a handful of other expressions used in order to wish somebody well:

• Lykke til! (literally ”Luck to!”) is the thing to say to your friend who’s going to climb a mountain. You can also add jeg krysser fingrene (I cross my fingers) – in that case, you should remember to actually put your middle finger across your index finger, on one or both hands. Maybe it really is lykkebringende (”luck-bringing”).

• Skitt fiske! [SHIT FISKeh] literally means ”bad fishing luck”, but when you say it to someone who’s walking towards the fjord with a fiskestang (fishing rod), you actually mean the opposite! 🙂 It is a bit like when you say ”break a leg” in English – of couse you don’t want anybody to actually break her leg! I suppose that people used to believe that fiskene kunne høre deg (the fishes could hear you). So, if you could fool them into believing that fiskeren hadde uflaks (the fisher was having bad luck) rather than flaks (good luck), then maybe they wouldn’t mind swimming around close to overflaten (the surface).

• If somebody’s ill, a nice thing to say is god bedring! [goh BEH-dring] (good improvement!). It is the equivalent of saying ”I hope you’ll be better soon”. Depending on the situation, you could perhaps add jeg håper du blir frisk snart! (I hope you get well soon!) or even opp med humøret! (cheer up!, literally ”up with the mood!”) or det går så bra, skal du se! (it’ll be all right, you’ll see!).

• There are many ways you can cheer on someone, including kom igjen! [come eeYEN] (come on!) and kjempebra! [H-YEMpehbrah] (very good!). A heiagjeng (heia gang) is a group of people who heier på (cheer on) an athlete or a team, often using the exclamation heia [HAI-yah]: Heia Kari! Heia Norge! (Go Kari! Go Norway!)

• It is not compulsory to wish your guests a good meal in Norway (like you do when saying bon appétit in English). If you feel like it, though, you can always say håper det smaker! (hope it’s tasty!). (If someone says something similar to you, remember to reply with a takk! or even tusen takk! [1000 thanks!].) BTW, when dinner is served, you shouldn’t start eating before the host has said værsågod! (please!, ”the food is ready”).

• When a friend leaves, you can wish her god tur! (good trip!) if she’s indeed going to travel a bit, or maybe simply ha det bra! (have it good!). In colloquial Norwegian, ha det bra is usually shortened to ha det! (bye!, literally ”have it!”).

• When somebody wishes you well, it’s easy to return the favour: Takk, i like måte! (Thanks, the same to you!)