Afghan Turbans Posted by najib on Sep 6, 2011 in Uncategorized 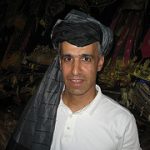 Signs and symbols are used to recognize and communicate with one another by many different societies and groups. Key leaders wear headwear known to us as turban, and keep long beards in the tribal Pashtun areas of Afghanistan and Pakistan.  The significance of a turban worn in Afghanistan is that it describes a person’s title, age, status and they are closely associated with the culture and religion.

Turban is an English word used to refer to many kinds of headwear throughout the world.  The Afghan turban is an ancient headwear and it is still popular in the country.  The main purpose of the turban is to keep the wearer cool when the weather is hot and to keep him warm when it is cold. A turban is referred to as, lungee. The word lungee comes from the Pashtu language which is spoken by the Pashtun ethnic group in Afghanistan and Pakistan.  Some Pashtuns also refer to the turban as pagree which is a Hindi word spoken in India.  Turbans are worn mostly by the elder Afghans of all ethnic groups throughout the country and at times children, young adults and middle age men may wear them too.  It is a very common headwear among the Pashtuns. Lungee is a particular type of a fabric which is about five meters long and a meter wide. They are available in silk, cotton and many other types of fabrics. People wear a regular round cap under their turban and once they place it on, then they wrap the turban around it with one end usually sticking up on top about eight inches and the other hanging loose over his shoulder about a meter long.  Wearing a solid thick cap will help so the turban can stay tight around it, otherwise the turban will be falling apart.  Afghan turbans only weigh a few ounces but some may get the wrong impression from its cushion like exterior looks that it could be heavy.  Afghan men avoid wearing turbans that have bright colors which draws attention to them such as red, green, yellow, orange, pink and etc. They prefer wearing simple colors that are white, off white, gray, dark blue and black. Many turbans are striped.  Lungee is usually worn in tribal meetings but majority of Pashtun tribal elders prefer to wear them in everyday life too.  Some tribal elders may also wear a cap called the Pakol.  Pakol is a well-known cap among the Afghans. The Pakol is round cap made of wool. In western world people refer to it as the men roll up cap.  The color of pakol is limited to ivory, brown and black.

There is a great deal of responsibility accompanied with the turban.  Most elders who wear the turban are normally wise men who have to make wise decisions for their family, communities and country.  Afghans with titles such as the Mullahs (religious leaders), Maliks (village elders), Meshers (family, village, clan or tribe elders) and khans (land owners) in the tribal areas are normally distinguished because majority of them wear turbans. The Mullahs and Meshers regularly wear white or black turbans. Afghan men wear White and black color turbans in following the practice of their noble ancestor, the Holy Prophet.  Therefore a major reason why most Afghans wear the turban is to keep their religion’s tradition alive. Green is the color of paradise in the Muslim world but very seldom you will see an Afghan wearing a green turban. The Malik and Khans may choose any appropriate color which may be worn by others in the community or to match their outfit.  Black and white turbans are common colors worn in the country.  The above individuals have great influences over a large number of people in their communities.  They can make decisions about an individual’s marriage, education, profession and much more involving their personal domestic issues in their villages or towns. 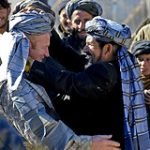 Most men in the rural areas wear caps or turbans.  There are varieties of styles and decors of caps making them distinctive between and within many ethnic groups.  Young boys in the rural areas of the country usually wear caps.  Men may wear caps or turbans. Afghan elders wear turbans as a symbol and as a reminder of their basic values. The elders have a higher status within their family, clan or tribe. They have the authority to handle and solve cases such as domestic disputes and minor criminal incidents within their communities. Tribal communities are mostly located in the rural parts of the country.  Elders of these tribes normally wear turbans and keep long beards. It is very important to have the awareness of these wise elder’s existence in the local communities because they can even help write the constitution of the country. People in their villages or towns turn to these elders for help and advice with personal issues which local authorities should handle. Since local authorities may not exist in their villages or towns, the feedback from these elders will be very helpful in accomplishments of solving their personal and domestic issues.

Afghan men and women dress modestly compare to those in the western world.  For example, wearing shorts, short sleeves tops, and walking in public without a shirt is considered inappropriate. In the urban parts of the country most young men and adult wears western clothes and most of them could wear short sleeve shirts and feel free to walk in public for instance in Kabul, Herat, Mazar e Sharif and some other parts. In the rural areas young men and adults will feel uncomfortable rolling up their sleeves or wearing short sleeves shirts.  Most elder men dress conservatively and feel naked without their headwear in public places. Hats must be taken off when applying for a passport or a driver license in the western countries where in Afghanistan it is considered an insult for an Afghan elder to remove their headwear. In the western countries, people most of the time take off their caps when they enter a building or when they are sitting in meetings and work place.  In Afghanistan, the tribal leaders always keep their headwear on even when they are at the legislative offices or gathering. Wearing a turban is a reminder of their honesty and ethic. It also has a spiritual meaning and most of these elders want to keep it alive.  It would be disrespectful for anyone to ask an elder to remove his headwear even If he is invited to someone’s house because he might feel naked without it. Most of these elders are even allowed to take pictures with their headwear on for their National Identification Card.

It is important to treat each other with respect no matter where we are and who we are dealing with. People should be treated with respect regardless of their age, gender, tradition, culture, and religion. It is important to show respect to these elders and should try to recognize them as key leaders by their symbols. These elders are key leaders who have the capabilities to influence the entire community in which they live in.  Most people in their villages or towns try to build stronger relationships with them by treating them with dignity and respect. When a person fails to show respect for the elders they could lose support from the community. The information provided above about turbans and pakols are to recognize key leaders and to understand that a turban is not just a peace of fabric that covers an Afghan’s head or to keep him warm and cool but it is an important symbol of their identity, culture, and religion.