Can you buy the real Polish kielbasa in USA? Posted by Kasia on Nov 18, 2019 in Culture

There is nothing better that the smell of homemade Polish sausage…and when I say homemade, I mean it! Growing up in Poland numerous times I witnessed the process of making the true Polish sausage. Everything from ending the life of the pig first (I know…it sounds sad…), preparing all the meat, smoking the sausage and of course enjoying it after! 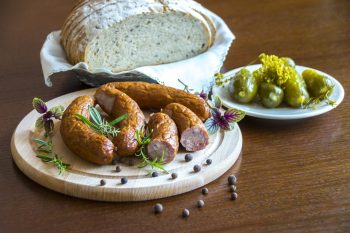 Image by Photo Mix from Pixabay

Having originated in Poland, kiełbasa is a delicious food item that is now enjoyed around the world. Nearly everyone has tried this sausage in some form and at some point in time, be it in a dish for dinner or straight off the grill! It is a fun word to say and has a most interesting history. The term ‘kiełbasa’ was not mentioned in the history books until XVIII century. The term was used from that point on to describe a thick sausage that is dark in color, meaning it was heavily smoked. It was commonly seen on the dinner tables of noblemen and knights of higher stature. Merchants were known to carry the sausage during long travels, and knights would often be seen carrying sausages on their belts. So, as you eat it today, think of yourself as royalty!

During the first creation of kiełbasa, royalty was known to hunt and enjoy having their prey for dinner. Once the sausage was created, other meat was added in with the pork and spices such as rabbit, deer and wild boar. With these meats and new spices introduced, the kiełbasa took on a new flavor and new recipes were created in the process. Read more about the history of kiełbasa here.

The kiełbasa Americans are most likely familiar with—the “Polish sausage” that’s available at almost every ballpark, big-city food cart, country fair and grocery store across our union, is smoked. Technically, it’s a Polska kiełbasa wędzona (smoked sausage). Kiełbasa in Polish just means “sausage.” If you find yourself in a Polish deli or restaurant, you’ll likely find several types of kielbasa: farmer’s, fresh, krakowska  (Kraków-style). The smoked one that Americans know best can be eaten without further preparation. But is it really the same as the true Polish kiełbasa? Definitely doesn’t taste as the one I grew up with…but it can definitely be pretty close in taste, especially when you get it from a true Polish deli in a Polish neighborhood.

Here are few pictures I took during one of the trips to Poland: 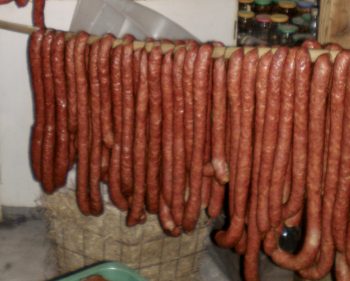 Smoked sausage drying in the basement 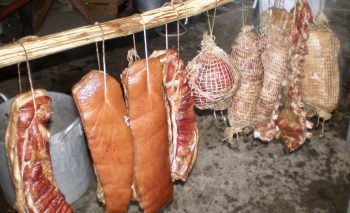 While making the sausage, different parts of the pork were used to make ham, bacon, ribs. 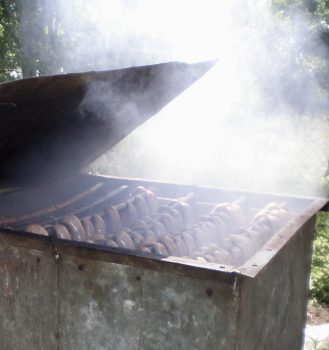 What are your favorite places to get Polish sausage?