Dictionaries and Reference Books Posted by Anna on Jan 22, 2010 in Uncategorized

With Polish being Polish, it’s no wonder there are gazillions of language reference books and dictionaries out there on the market. Because, yes, even Poles need help with their own native language from time to time. No, actually make that – most of the time. Even I myself cannot imagine functioning without my old trusty słownik ortograficzny.

There are literally shelves upon shelves of Polish help books to choose from. And they range from ridiculously expensive to “front of the shop sale bin” cheap. And that’s not including all the stuff that is available on line.

Myself, I prefer printed books. I like to see the words arranged alphabetically on a page and see the flow from one entry to the next. This way, when you read them, you can marvel at the magnificent confusion of “klauzula” (clause, in a contract, for example) and “klauzura” (area of cloister off-limits to non-monks/non-nuns). Without my trusty dictionary, I would have never even known that such a place existed. But then again, klasztory (cloisters) are not my thing to begin with.

I was looking at my work bag today, and realized that last year there were two books stuck in there more or less permanently. And since it looks like I’ve been using them quite a lot, I thought it might be worth sharing with you what they are.

I got both of them from a sidewalk sales bin and that means they were cheap. And because these books were intended for a wide audience, they are also very functional and simple.

“Słownik poprawnej polszczyzny” by Daniela Podlawska and Magdalena Świątek-Brzezińska (published by Wydawnictwo Szkolne PWN 2008) is meant primarily for students. However, as the authors point out – it can also be used when teaching (and studying) Polish as a foreign language.

Each entry is marked with the appropriate part of speech, gender (where applicable) and the most troublesome cases are also listed. In addition, most entries give an example of the word used in a sentence. Some words (but not all) come with an explanation of their meaning. 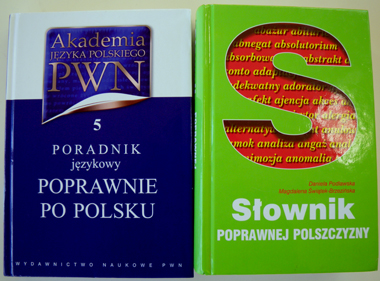 The other book that stays in my bag is the 5th volume in the Akademia Języka Polskiego PWN series – “Poradnik językowy – Poprawnie po polsku” (Wydawnictwo Naukowe PWN 2007). It’s a collection of about 1000 entries selected from the on-line version of Poradnia Językowa PWN. People asked questions, experts answered, the whole thing got put in a book.

I like it. It makes for some very interesting reading. This book may not be suitable for beginning Polish learners, but for people who are already somewhat proficient in the language it may be an eye-opening experience. It sure was for me!