Przedszkole i zerówka – Polish kindergarten and “class zero” Posted by Kasia on Jan 2, 2015 in Uncategorized

In Poland public kindergartens (przedszkola publiczne) are intended for children aged 3 to 5 years (in exceptional cases they may also accept children aged 2.5 years); they serve as care and education institutions. They provide care for children while parents are at work, but are also conducive to their social  (contacts with peers in the same group) and intellectual development (learning activities). For foreign children they are also a great opportunity to learn the Polish language.Public kindergartens are open from Monday to Friday.

Local governments determine the number of hours daily that a child’s stay in kindergarten is free of charge (minimum 5 hours per day), and how many additional hours must be paid for by the parents if the child stays in kindergarten above that limit. Local government also sets the hourly rates for the stay in a kindergarten for a calendar year – and therefore the rates vary between cities (in Warsaw the fee for each additional hour is 2.81 PLN). In principle, parents also pay for the meals served to children in kindergartens (in Warsaw around 8 PLN per day for three meals). Most of these institutions, in addition to the program of educational activities conducted by the kindergarten staff, also offer a variety of paid extracurricular activities appropriate to the age of children – zajęcia pozalekcyjne odpowiednie do wieku dzieci (ex. dance, art, English). 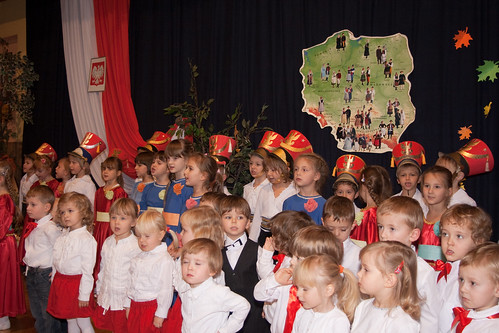 Image by Ania i Artur Nowaccy on Flickr.com

In many large cities, an electronic kindergarten enrollment system for children has been established, allowing for creation of a preferential list of establishments into which parents would like to enroll their child. (so-called 1stchoice kindergarten – to which they would most like to enroll the child, and others they would choose if the most desirable one could not offer their child a place). Joining a kindergarten group by a child at a later time is only possible if there are places in a given kindergarten, which very often run out quickly. Foreign children are accepted into public kindergartens under the same conditions as Polish children. Parents interested in enrolling a child for kindergarten should refer to the criteria for acceptance set out by local authorities. To this end, it is best to contact the selected kindergarten directly or the appropriate department in the Municipal Office  (Urząd Miejski) for the area you live in Poland.

If parents are unable to find a free place in a public kindergarten, they can still benefit from a private kindergarten, where fees, however, are much higher, or entrust the care of the child to a family member or a hired nanny.

The zero form, also called “year 0” (zerówka), is special classes designed for children who will be enrolled the next school year in the first grade of primary school. The Polish education system is undergoing a reform program, part of which is to lower the age of starting school from 7 years to 6. At this time, children still start compulsory school at 7 years of age.  For children aged 6, parents can decide whether their child will go to the first grade to learn the same things as seven-year-olds, or to the so-called “zero form”. Selecting one of these two forms is mandatory (i.e. a six year old has to attend either the “zero form” or the first grade).

The “zero form”, i.e. the class preparing children for school attendance, in particular for learning literacy and numeracy skills, can be run both in kindergartens and primary schools (szkoły podstawowe).

Principles of financing the child’s stay in “year zero” depend on the type of institution in which it is operated – in kindergartens the stay is partially paid, while at schools it is free of charge. In both types of establishments, parents pay for the cost of meals served to children attending the zero form.

Both types of facilities provide care for the children until late in the afternoon.