Śniadanie, Obiad, Kolacja Posted by Kasia on Aug 31, 2010 in Culture

There are three main meals in Poland: the morning śniadanie(breakfast), the afternoon obiad (dinner), and the evening kolacja (supper). In between they may be supplemented with a lighter drugie śniadanie(second breakfast) and a podwieczorek (tea time – usually snacks). 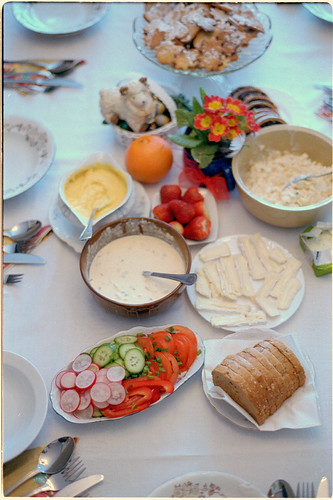 The traditional Polish breakfast are sandwiches called kanapki, which consist of just one slice of bread (usually fresh and crispy) or toast with butter (masło) and toppings such as cold cuts (generally called wędlina), meat spreads, the Polish sausage (kiełbasa), tomatoes (pomidory) and sliced pickles (ogórki).  Twaróg, a Polish farmer’s cheese (ser), is the breakfast classic and comes in many forms. Twaróg can be eaten plain, with salt (sól), sugar (cukier), or honey (miód). It can also be mixed with chives.  Eggs (jajka) are served often as the main breakfast item, mostly soft-boiled (gotowane na miękko) or scrambled (jajecznica).  You will also see hot dogs (parówki) on the plates without rolls. Hot oatmeal, muesli or breakfast cereal with milk (mleko) are very common, especially for kids. Jam (dżem) spreads are popular for a quick breakfast, including plum, raspberry, strawberry and black or red currant spreads. Breakfast drinks include coffee (kawa), milk (some areas may serve fresh milk from their own cows), hot cocoa (kakao), or tea (herbata). Traditionally, the Poles avoid heavy-cooked foods for breakfast. For the most part, one will not see fried meats or potatoes in a classic Polish breakfast. Emphasis is placed on a large variety of foods to satisfy everyone at the breakfast table.

Since most people work till 3 p.m. or 4 p.m. they usually have their dinner right after they are done working. On weekends it is customary to have dinner earlier, usually  anywhere between noon and 2 p.m. Typically obiad is a two-course meal, where a soup precedes a meat (or fish) dish with potatoes or rice. Soup usually starts off the meal, such as Barszcz a red beet soup, served with stuffed dumplings or a fermented rye soup called Żurek. Also chłodnik, a cold vegetable soup in sour milk, is usually served in the summer. Some other soups are popular and these include grzybowa (wild mushroom), ogórkowa (pickle) and kapuśniak (cabbage). Favorite appetizers include smoked salmon (łosoś wędzony), smoked eel (węgorz wędzony), herring (śledź) in various forms, salmon, caviar and the authentic Polish cold cuts and sausages.

The authentic Polish salad is the surówka, which consists of grated vegetables like cabbage (kapusta), red cabbage (czerwona kapusta), carrots (marchewka), leeks (pory) and apples (jabłka). A tasty but simple salad is mizeria, sliced raw cucumbers in sour cream or yogurt. Tomatoes in Poland are among the best in the world so any salad should taste exceptional!

The main meal in Poland nearly always consists of some type of meat. Pork (wieprzowina) is the national meat of Poland and many main course dishes will have it. Pork can appear as a boneless chop (kotlet schabowy) or pork loin (pieczeń), which is usually served with some type of sauce. This sauce can be sos myśliwski which is usually a sweet sauce with raisins and honey among other ingredients. Another sauce is sos grzybowy, a wild mushroom delicacy. Traditional Polish poultry is (kurczak) a Polish style chicken and duck (kaczka) filled with apples. The chicken is filled with a stuffing of liver, rye bread, egg, butter, spices and parsley springs roasted in the oven. The duck is rubbed with marjoram, filled with apple sections and also roasted in the oven, often basted with water and red wine.

Polish fish dishes are very tasty. They feature a variety of types of fish: eel, pike, perch, sturgeon, sea fish, and many others. The fish can be cooked many different ways: boiled, fried, roasted, fried in breadcrumbs, and served with delicious stuffing and sauces. Karp is especially popular and it is served in different varieties, such as fried or in grey Polish sauce with raisins and almonds. Karp is also a very traditional Christmas dish.

Desserts consist of either cake or ice cream. Apple cake (szarlotka), which my mom makes very well, is extremely popular. Cheesecake (sernik),   which tends to be way fluffier than you would find in the US and poppy seed rolls (makowiec), which are a favorite with the adults. There are also layer cakes, apple tarts, eastern cakes, cream cakes and doughnuts which you can find at any bakery.  My mother is an exceptional baker and makes all of these desserts right in her own kitchen!

The Polish evening meal usually resembles a morning breakfast but when there is a formal event such as a birthday or a name day it usually turns into a dinner party. Pierogi (dumplings stuffed with meat, sauerkraut, mushroom, cheese or fruit) is a very popular dish served at dinner time. Another dish (one of my favorites) is crepes stuffed with farmer’s cheese called (naleśniki) is cheese mixed with eggs and sugar to make a sweet filling which tastes like a desert but is just as good for dinner.

I hope you are ready to try some Polish cuisine. Enjoy and let me know if you need any recipes – I will be happy to share them with you.