Tasty treat that often gets overlooked during Polish Fat Thursday Posted by Kasia on Feb 11, 2021 in Culture

I honestly wish I was in Poland today! So does my husband and my kids…donuts just don’t taste the same, unless you have them during Fat Thursday in Poland! And they are not the only tasty treat that I love on that day…

Often overlooked and not as popular as pączki, faworki are equally delicious and traditionally baked during this sweet holiday in Poland!

Known by many names, Faworki, Chruściki, Chrusty, these sweet and crispy tasty treats are on Polish tables right next to pączki during Fat Thursday (Tłusty Czwartek).

Fat Thursday  is a traditional Catholic custom celebrated on the last Thursday before Lent in Poland (and other countries as well). This popular tradition’s name came from people consuming large amounts of sweets for most meals during that day. Last few days of Carnival give you a chance to party and indulge in amazing food.

This is one day when EVERYONE in Poland forgets about their diets and nobody feels guilty , no matter how many pączki/faworki they had! There is also a superstition, that eating at least one pączek (singular: pączek, plural: pączki) on Fat Thursday guarantees luck in the coming year… if you don’t eat one, bad luck will chase you!

Now how about Faworki? Even thought they go by different names I mentioned above, this is the name we always used at my parent’s house. Growing up in Poland, I clearly remember this day every year and I think I was more excited about the whole process of baking, than actually eating them! They are traditional sweet crisp pastry made out of dough that has been shaped into thin twisted ribbons, deep-fried and sprinkled with powdered sugar. Yum!!!

My favorite part was twisting the thin strip of dough: you had to make a small slice in the middle and then twist it couple times through that slice. My younger brother and myself would always help in the process!

Did you know that according to the legend faworki were created by accident?! A young confectioner threw a thin strip of pączki dough into hot oil. The dough shaped itself into a braid, and after being sprinkled with sugar, it turned out to be super tasty.

My memory was always baking and preparing sweets for this day at home with my mother, but with busy life of many people, they choose to purchase delicious pączki and faworki from bakeries. 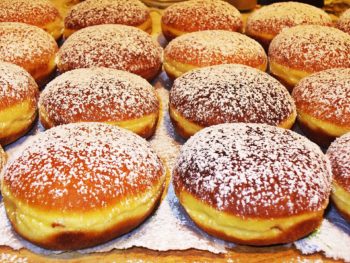 Fat Thursday with pączki. Image by Krzysztof Jaracz from Pixabay

Every year, there are long lines at some great sweet shops! People line up early in the morning to get their share of donuts! During that day in Poland donut consumption averages out at around 2.5 per head, but a lot of people try to eat as many as they can during that day!!! With the pandemic, I can only guess that instead of log lines, there are a lot more deliveries of all the delicious sweets in Poland.

And I would like to add one more thing: Polish pączki taste totally different than any donuts I ever had here in US! Not that I’m biased, but the Polish ones are definitely more delicious:)

How many sweets are you planning on having today???

Take a look at my post from couple years ago to find out a little more about history of Fat Thursday!