Typical Polish lunch, what’s on the menu “na obiad”? Posted by Kasia on May 8, 2013 in Culture

It was really hard for me to get used to eating late diner when I moved to USA. That’s of course because Polish lunch is like dinner her…Poles eat big meal between 12-3pm and sandwiches or salads at dinner time (most of the times, with exceptions of course). 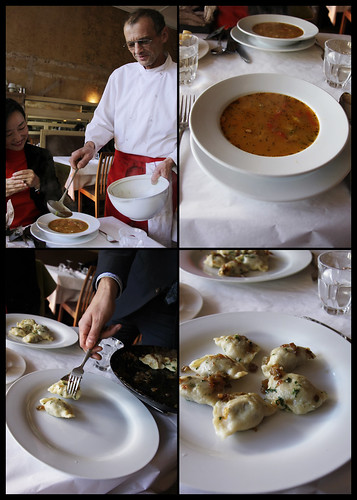 Image by Kotomi_ on flickr.com

Typical meals are very hearty and often contain a lot of meat. Just sampling them is enough to discover that they are really delicious. The most recommendable dishes are: bigos, kotlet schabowy, pierogi and gołąbki.

A lot of times lunch (obiad) contains 2 dishes: a soup (zupa) and main course (danie główne). Here are some lunch/dinner dishes you may see on the menus in Polish restaurants:

Żurek: sour rye soup with potato, sausage or an egg, sometimes served in a bread loaf.

Krupnik: barley soup with a smattering of vegetables and smoked meat.

Kotlet schabowy: traditional breaded pork cutlet (a tasty choice if you do not want any risk).

Baranina: roasted or even grilled lamb – great, especially in the mountains.

Gołąbki: cabbage stuffed with meat or meat and rice.

Kaszanka: grilled or baked solid pieces of buckwheat blended with pork blood and shaped as sausages.

Łosoś: salmon, often baked or boiled in a dill sauce.