Reading texts in a foreign language is a great exercise for achieving fluency. Literature then, has a significant role on that regard, because it helps on the process of enriching vocabulary and developing reading comprehension skills.

Today’s post will talk about Brazilian literature or, more specifically, about the prize-winning escritora (writer) Clarice Lispector. The reason why eu a escolhi (I chose her) is because not only is she one of the most talented authors in our country’s literary history, but also because Lispector has reached a canonical status and her work was therefore translated into English by publishers like New Directions and Penguin Books.

Os livros dela (Her books) estão disponíveis (are available) worldwide and podem ser comprados (can be purchased) both in English and Portuguese at online livrarias (bookstores) such as Amazon, Book Depository, Barnes and Noble. Readers can conduct a comparative reading between the original and its version in English to practice their language skills – or, if you’re feeling adventurous, you can just buy a copy in Portuguese and embark on a literary journey.

Clarice Lispector nasceu (was born) in 1920 Ukraine, but veio ao (came to) Brazil at a very early age and foi criada (was brought up) in Recife, in the northeastern region of the country. In her teen years, ela se mudou (she moved) to Rio de Janeiro, started law school and published her primeiro romance (first novel) at the age of vinte e três (twenty three). Lispector’s writing is haunting and intense, and her critically-acclaimed style is innovative, sometimes fragmented. Clarice Lispector’s fiction was, therefore, hugely important to Brazilian literature.

The list below contains a short summary of three major novels by Clarice, all of which podem ser encontrados (can be found) in both languages.

Perto do Coração Selvagem (Near to the Wild Heart) -1943

Lispector’s first novel, the plot is about uma mulher chamada (a woman named) Joana and her recollections from her infância (childhood) to her adulthood. The unconventional narrative about memory takes us through different stages in her life, from her school days as a girl to her failed casamento (marriage). As the protagonist looks back on her life, she compares her experiences, contrasting past and present.

Marked by a stream-of-consciousness style, Passion According to G.H. narrates the story of a famous and prosperous Rio de Janeiro-based sculptress, identified only by her initials. She entra (goes into) her maid’s vacant room para limpar (to clean it up), spots uma barata (a cockroach) and crushes it in a nervous fit, after which she starts facing an identity crisis. Both repelled and absorbed by the sight of the oozing insect, the incident leads to a spiritual experience that culminates in a shockingly disturbing twist no final (in the end), one the book’s most memorable scenes.

Widely regarded as her one of her greatest novels, Hour of the Star centers on the misfortunes of Macabéa, an uneducated, simple-minded and mild-tempered typewriter who migrates from the Northeast of Brazil to Rio (located in the more urban and cosmopolitan Southeast). Penniless, romantic and innocent, the heroine leads a simple life as a movie-lover and an avid Coca-Cola drinker. After the end of her relationship with her despicable boyfriend and being diagnosed with tuberculosis, she decides to visit a fortune teller, which provides a revealing moment in the story. The novel has been adapted into a motion picture in 1985. 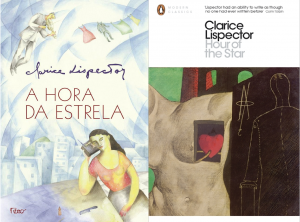 Boa leitura a todos! (Good reading for you all!)