Three Beaches worth visiting in the Brazilian Northeast Posted by carol on Feb 12, 2016 in Brazilian Profile, Culture, Entertainment, Geography, Vocabulary

You don’t precisa saber (need to know) much about Brazil to recognize that its beaches are among the most distinguished in the mundo inteiro (whole world). Well, obviously there is a reason for that. With its huge continental proportions, a litoral (coastline) of 7,491 km and more than 2000 beaches across the country, passar o tempo (spending some time) and chilling at the beach are amidst the primary choices of every Brazilian on vacations, living in coastal cities or not. With such vast territory and so many options, I decided to step away from the obvious southeast cities like Rio de Janeiro and talk about some incredible locations up the North. I hope you enjoy it.

Situated in the famous archipelago of Fernando de Noronha, this beach has been considered to be among the mais bonitas (most beautiful) in the world. To gain access by land to its impeccably clear waters and white sand, one must find a way through the crack of a huge cliff that surrounds the whole coast. From the top of that cliff it is possible to have a great view of the place, including the Morro Dois Irmãos, one of the landmarks of the whole island. It is also considered to be one of the greatest diving spots in the country and TripAdvisor users have elected it as the world’s best beach twice in a row. 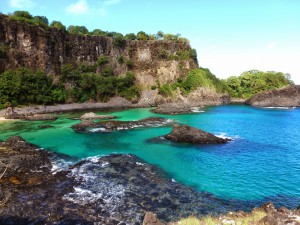 Situated 85km away from the capital Natal, this former fisher’s village was “discovered” by hippies, surfers and foreign tourists in the 1980’s, tornando-se (becoming) a major destination for all kinds of pessoas (people). Now famous for its hype restaurants and charming hotels, Pipa has a laidback and cool atmosphere, not to mention its stunning landscape and fauna. Once in the sea, it is possible to come across dolphins and turtles nadando (swimming), além de (besides) having a great vista (view) of the 10 meter-high pinkish cliffs topped with atlantic forest vegetation that surround the whole place. 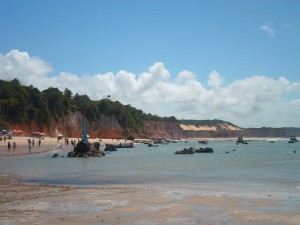 Between the cidades (cities) of Trancoso and Caraíva, in the South of the Bahia state, lies the gorgeous Praia do Espelho. Apesar de (Despite) being the most well-known beach in the area, its access can be tricky and, for that reason, the place is usually more peaceful. With powder white beaches and natural warm swimming pools created by reefs at low tide, Praia do Espelho is a great destination for those looking for a spot to relax and appreciate nature in its full splendor. 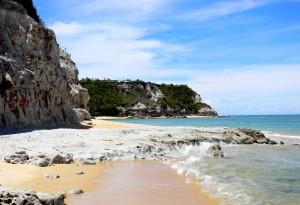