А в то же время в Екатеринбурге… [And at the same time in Yekaterinburg…] Posted by josefina on Jun 16, 2009 in Uncategorized 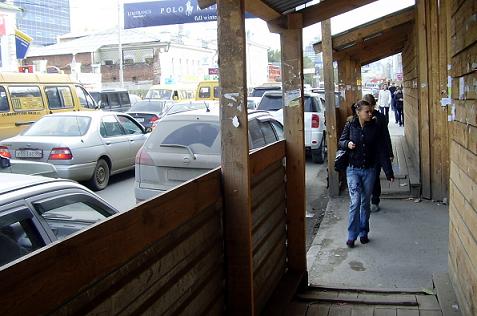 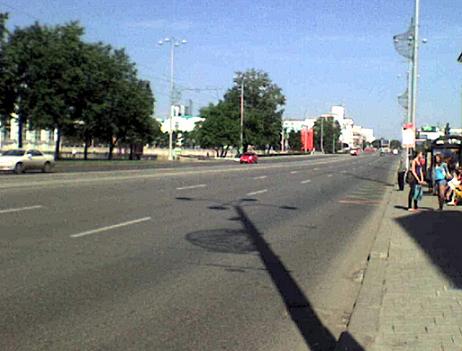 Now my «родной город на Урале» [hometown in the Urals] looks like this! Pictured above is the main street of the city – «проспект Ленина» [Lenin’s prospect]. You might not find this picture too extraordinary, but let me inform you of the fact that I’ve lived here for almost three years and I’ve never actually seen the asphalt there before for all the cars… So what’s going on in Yekat right now, you’re wondering? Well, yesterday and today (16-17 of June) marked the summit of «ШОС» [SCO] – that’s short for «Шанхайская организация сотрудничества» [Shanghai Cooperation Organization]. Tomorrow another summit starts here in our town: «БРИК» [BRIC]- that’s an acronym for the countries «Бразилия, Россия, Индия, Китай» [Brazil, Russia, India, China]. Yes, we’re all crowded with international presidents and thousands of policemen flown in from all over Russia to protect them (from us or from themselves, now that is the question…)!

During the past two months Yekaterinburg, where I have lived, studied and worked for almost three years now, has changed greatly day by day before my eyes – «к лучшему!» [for the better!] Yekaterinburg is like most Russian large cities; with both good and bad sides and its own little special, quirky details. But most of all it’s just like any other Russian city at this point in time – growing fast and changing at an even quicker rate. The financial crisis hit hard during last fall, and for a while everything seemed to be standing still; for a couple of months all construction sites around town (they’re everywhere here!) stopped working. Then in April – with the two international summits SCO and BRIC only two months away – the Russians proved that they indeed can do things right: if they’re forced to, that is. Yekaterinburg shaped up in ways I had never foreseen. Roads were fixed or built from scratch all over again (since they were in such a poor condition to begin with), buildings were painted, flowers planted, embarrassing elements removed (such as advertisement reminding of the ongoing financial crisis, mostly those saying «аренда» [for rent] on new fashionable buildings) and Yekaterinburg began to look like a ‘real’ modern ‘megapolis’. Most of these changes, though, were made only within the center of the city and mainly their the efforts were concentrated on the roads on which the delegations were to travel on during this week in June, yet the amount of work that they pulled off within two months are still worth an enormous amount of respect. They even managed to build a new terminal at the airport! (My close friend, who works at the airport, said they did it so fast that it’ll probably come tumbling down by the end of June, but hey, if that’s not the Russian way, then I don’t know what ‘the Russian way’ is.) 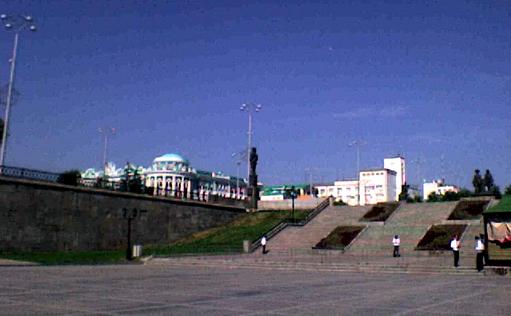 The green building seen in the background – newly renovated for the purpose – is «резиденция президента Российской федерации в Екатеринбурге» [the residence for the president of the Russian Federation in Yekaterinburg] where «Дмитрий Анатольевич Медведев» [Dmitry Anatol’evich Medvedev] might be having his tea right as you read this as he’ll be staying there this whole week. I’m sorry for the poor quality of the pictures today – my camera broke and I’m forced to document Russian reality with my phone these days…

At first I thought of calling today’s post: “Word of the Week: «Показуха»” [colloq. show; window dressing; from the verb «показать/показывать» – to show; display; demonstrate], since that’s what has been on my mind the entire month of June. Because, I thought, Russians don’t care about keeping their city clean for themselves, but as soon as somebody from the outside decides to take a peak at how they’re living, then they’re always careful to put on an impressive show. Afterwards everything – as is the general rule – falls to pieces while the last flight with important international people leaves town. Today I took a walk around town and it changed my feelings completely. The city has never looked as good as it did today – everything was clean, even the weather behaved well (sunny and warm!), there were hardly any cars on the streets which meant that the city was calm, quiet and perfect for walking around and enjoying life in. Everywhere in the city people seemed to be feeling just what I was feeling; everywhere people were walking around and listening to the silence and soaking up the sun and breathing not-so-dirty-as-usual air. With a couple of police officers on every street corner this is the safest I’ve ever felt in Russia. I don’t mind if this will last for just for a week or a month – «я горжусь своим городом» [I’m proud of my town]. One of my friends sighed deeply at the sight of empty, wide prospects everywhere and said – not without a sweet sense of tender nostalgia in her voice – «Ах ты, совок!» «Совок» is the Russian word for the English variant ‘Homo Soveticus’; in the way she used this word it can be translated as: ‘Ah you, Soviet Union!’ Or something like it. And I have to agree because yes, in a way today Yekaterinburg looked just like it does on all those old Soviet photographs… clean, empty and filled with men of the law keeping order. 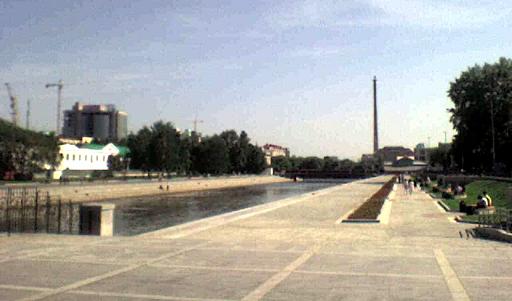