Celebrating Russia, or ‘aspects’ of the 12th of June Posted by josefina on Jun 11, 2009 in language, Traditions 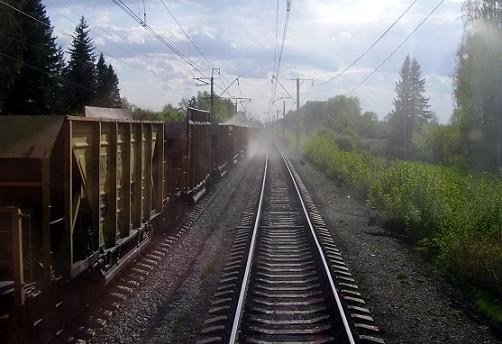 The pictures are back! «Замечательно!» Now the blog will be complete again! «Как хорошо!» And what better a tribute to Russia’s uniqueness – which we are about to celebrate tomorrow on the 12th of June – than pictures taken from the last wagon on a train while traveling through Siberia?

The choice made for the post’s title today is unfortunate since it cannot be translated back into the language of our affectionate obsession – «празднуем Россию!» [‘we celebrate Russia!’] Is that something one is allowed to say in Russian (not politically, of course, but grammatically and stylistically speaking)? I have no idea! But what I do have an idea about is how to best prepare for tomorrow’s «день России» [‘Russia’s Day’] – with looking into the most difficult part of the Russian language: «совершенный и несовершенный виды глагола» [perfect and imperfect aspects of the (Russian) verb]. Yes, the time has finally come to clear up a thing or two about the most dreaded aspect of learning Russian – funny enough it is also known as ‘aspect’. Why have I as of yet – after a year and a half of writing for this blog – failed to pay proper attention to this highly significant part of Russian language, why have I cautiously ignored the fatal question of ‘«делать» versus «сделать»‘ for so long? Well, it is time for a confession: the aspect system of Russian verbs is so complex that a foreigner cannot comprehend it fully and wholly EVER. Now don’t let that get you down (or you could argue with me on this point; having a profitable dialogue with people of different opinions is what I’m all about – bring it on!) because you can learn the basics of it almost painlessly. «Почти» [almost] is the key word right now, right here. But let’s forget about that for a moment and focus on what we CAN learn – the foundation. The foundation for the Russian aspect system is easy because it is built around two central moments:

1) Whether or not the action achieved a RESULT. If yes, then the verb should be perfect – «да, мы это сделали!» [yes, we did it!]; if no, then imperfect is to be used: «нет, мы этого не делали» [no, we didn’t do it]. (Do note that «это» in the second sentence is in genitive. Why? Because of the tiny little word «не»! Remember the rule about how negative statements should have the object in genitive? Well, here you have that rule in practice!).

2) Whether or not the action was REPEATED. If the action was preformed only once, it should be perfect – «ко мне сегодня зашёл Иван» [today Ivan came to see me], but if the action was repeated, then the aspect used is imperfect: «ко мне сегодня часто заходил Иван» [today Ivan came to see me often]. (Pay attention to the addition of the adverb «часто» [often] in the last sentence; usage of such adverbs that imply repeated actions, like for example «всегда» [always], «обычно» [usually], are always used with imperfect verbs! And not only in textbooks for foreigners, but also in real Russian life, so be aware of this and it will make things a lot easier!)

Now all of my examples above were concerning «прошедшее время» [past tense], but we all know that Russian language have two more tenses: «настоящее время» [present tense] and «будущее время» [future tense]. And how is the system of aspect reflected in these two other tenses? Let’s start with present tense first, since that’s by far the simplest. In Russian present tense is almost always (except when Russians say: «сейчас скажу» [lit. ‘now I will tell you’] and you think you have to wait for a while before they’ll tell you what they wanted to say to you, but then they tell you this straight away, and you realize that the perfect verb in future tense here is really about the present, but let’s not get into that today…) presented by an imperfect verb. To illustrate all of the following I will use ‘aspect couple’ (or ‘friend-verbs’ as I like to call them on a good day) «сдавать/сдать» [to hand in, to turn in; to hand over, turn over; to return; to bring back; to rent; to lease; to surrender; to give up] in the context of «сдавать/сдать экзамен» [to take/to pass an examination], because this combination is extremely present in my life at the current moment, «поскольку летняя сессия в полном разгаре» [since the summer session (examination period at the end of the spring semester in institutes of higher education in Russia) is ‘in full swing’; ‘at its height’].

In present tense the verb used is in imperfect, thus defining the action as yet lacking any result: «Я сдаю экзамен по истории русского литературоведения» [I am taking an examination in the history of Russian literary theory].

If that was easy, then let’s move on and discuss the future tense. In Russian language there are two different kinds of future tense. The first one uses «быть» [to be] in present tense plus an imperfect verb in infinitive. «Я буду сдавать экзамен по современным концепциям литературоведения» [I will take an examination in modern concepts of literary theory]. This construction tells nothing of whether or not this action will have any result, whether or not it will be repeated – it is focused solely and entirely on the mere reality of a fact that will take place in the future. The second way of making future tense in Russian language is by using a perfect verb (which only have the functions of future or past tenses; they have nothing to do with ‘here and now’). But with the verb I have chosen for today the future perfect verb used in the sentence: «Я сдам этот экзамен!» will mean not ‘I will take this examination’, but ‘I will pass the examination!’. Not all Russian verbs in perfect have such a ‘semantic twist’ [change in meaning] about them, but some do and it is important to be aware of this already from the beginning so as not to get too confused once you’ve dug your nose deep into the textbook to study them.

The perfect future tense means that the action will have not only an end – that this action will not go on forever – but also that there is some sort of result expected to come out of it. If I say: «я не сдам этот экзамен» it means ‘I will not pass this examination’, and the result here is clear for everyone to see: «неудовлетворительно» [the grade ‘fail’]. The imperfect future tense does not care for results or ends of the action mentioned. Thus if I state: «я не буду сдавать этот экзамен» [I will not take this examination], there is no way of knowing what is to follow such an action of mine.

Of course, this was but a very short introduction to ‘aspectology’ in Russian language, written merely because tomorrow is Russia’s Big Day and what better way to celebrate her than to try to learn something really ‘Russian’ (or ‘very Slavic’ at least)?