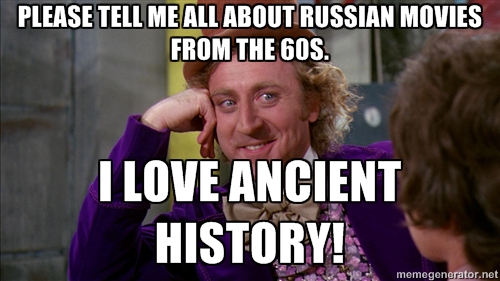 I believe this post is long overdue 🙂 . I have been planning to put together a list of new subtitled Russian movies for a while now. Those of you who already made the attempt to find some online on your own probably came across the same challenge I did – the selection of NEWER subtitled movies is hard to come by. I have spent some time searching and was able to come up with about 10 solid newer Russian movies that are worth watching.

Before we jump to the movie list, I would like to emphasize that watching movies, shows, documentaries, etc. in the language you are trying to master is a great way to learn it. I would even go as far as saying it’s one of the best ways: you hear the words used in a specific situation, you can read the translation, you can pause and rewind, and you can do it all from the comfort of your own home with a cup of tea, coffee, or what ever else floats your boat. Without further ado, let’s go over the movies I have found.

This Russian religious film about an Eastern Orthodox monk is considered to be the best Russian film of 2006.  It did quite well at the box office and won some awards. Enjoy high quality video and great subtitles.

The film addresses the challenges of youth by depicting two young girls as they are preparing for their first prom. Note: if the subtitles are not visible right away, click on the CC button on the bottom of the YouTube player.

A war drama set during the Nazi invasion of the Soviet Union in June 1941, in which Russian troops held on to a border stronghold for nine days (based on actual events).

Byelorussian Dream, an award-winning film, is the story of a young person from Minsk who has lived most of his life in a country ruled by a dictator. Against the background of falsified elections, brutal repressions, and a severe economic crisis, it shows how more people in the most ‘stable’ post-Soviet country are starting to demand change. This is a story about how the regime can crush a person, and how you can find your own freedom in a state that possesses total control.

The movie features two main characters, an American entomologist studying butterflies in South Ossetia and a Russian female journalist. The two characters must work together to get back to Russian lines after getting swept up in the August 8, 2008 Georgian offensive against the separatist enclave of South Ossetia.

It is already a challenge to make a film on death and call it Living. But Sigarev fearlessly gets to the very heart of things, where life, death, God, love, and imagination form an indestructible whole. A harsh and sometimes brutal experience, but catharsis will follow.

A comedy about Russian joining/being in the Russian army.

The last 3 movies are from a video-streaming website www.top-russian.com. They offer the free version of the movies (lower picture quality) or you can download the movie in good quality for $2.50.

Quiet and well-mannered Vitalik tries to start life from scratch in a new city. But there on his way he meets only crazy people. His neighbor, an eccentric girl named Christine, seeks to transform him into a normal guy, the lustful chief does not give him a rest at new work, and even a psychologist who helps him cope with all of this is a sadomasochist. Vitalik seems to be the only normal person in this movie.

This is one my personal favorites 🙂 . Some of it is in English. Julia Ormond and Oleg Menshikov deliver a great performance. “Douglas is a foreign entrepreneur, who ventures to Russia in 1885 with dreams of selling a new, experimental steam-driven timber harvester in the wilds of Siberia. Jane is his assistant, who falls in love with a young Russian officer, André, and spends the next 10 years perfecting the harvester and pursuing her love, who has been exiled to Siberia.”

Masha works as a DJ at a popular radio station; Maxim, an architect with a great future, is invited to work in Germany. Masha is going to marry her classmate. Both of them seem to have their future clearly defined, until… Masha looses her phone and Maxim finds it. What follows is a “phone relationship” but neither Masha, nor Maxim can make a final decision. Watch the film to find out if the two are destined to be together.