How to Celebrate a Wedding по-русски Posted by yelena on Jan 18, 2012 in Culture, Traditions 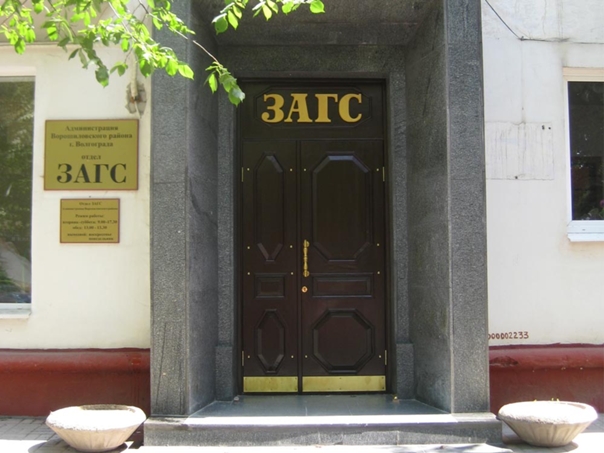 Doesn’t look like much, does it? Yet this fairly unassuming doorway, with a four-letter acronym ЗАГС, leads to a life of (hopefully) married bliss. This particular door is for the ЗАГС is in my hometown of Volgograd. I walked by it countless times as a child and was inside the office only twice, at a friend’s wedding and at my grandparents’ fiftieth anniversary.

I am going shopping for a set of two фаянсовые чашки (earthenware tea cups) today. It is a gift for a friend who is celebrating девятая годовщина свадьбы (ninth wedding anniversary). In Russia, the ninth is known as фаянсовая свадьба (earthenware wedding). So let’s talk weddings today.

Have you ever had a chance to be a guest at a Russian wedding? If not, you can still observe some of the traditions while vacationing in Russia and touring the sights. So what exactly is свадьба по-русски (Russian-style wedding).

To begin with, it’s a really big deal. Most weddings are celebrated с размахом (in a big way). This doesn’t necessarily mean шикарная церемония (lavish ceremony). The emphasis is on число гостей (the number of guests) as well as on celebrating от души (from the heart).

Let’s start by learning Russian words for the most important participants in a wedding ceremony:

Свидетельница – a maid of honor (lit: a witness since she will be witnessing the registration of the marriage record)

Свидетель, also known as шафер or дружка – a best man (lit: a witness, for the same reason)

The official paperwork is not handled by the church, but instead the happy couple goes to расписаться (register the union, lit: sign) to a local отдел записей гражданского состояния (registry office), ЗАГС for short.

But before that happens, a groom must go through an ordeal known as выкуп невесты (paying ransom for the bride). It is a game in which the groom and his friends are met at the entrance into bride’s house or apartment building by bride’s friends and guests.

To advance, a groom must pass through a series of tests, such as come up with as many ласковые имена (tender names) for his суженая (bride, lit: the intended one) as there are steps to the door. He might be challenged to remember meaningful dates and numbers – date of первое свидание (first date), date when he сделал предложение (proposed), the bride’s clothing sizes, etc. Or he might have to dance or sing or pass other tests. If he doesn’t pass a test, he can buy his way to the bride’s door by giving away candy, chocolates, Champaign, vodka, or money.

Once the groom gets to the bride, they make their way outside to свадебный кортеж (a wedding train or cavalcade). It is easy to tell the bride-and-groom’s car in the procession.

Not only will it be the front car, but also the fanciest looking one and the most decorated. Some of the most popular decorations include large golden обручальные кольца (wedding bands), цветы (flowers), ленты (ribbons), куклы-невесты (dolls dressed up in wedding dresses), воздушные шары (balloons), and колокольчики (bells).

At this point, the bride and groom are driven to ЗАГС (registry office) where they will go through a short церемония бракосочетания (marriage ceremony):

She  reminds everyone that this is самое прекрасное и незабываемое событие в жизни (the most beautiful and unforgettable event in life). She mentions the importance of family and великий долг друг перед другом и перед будущим детей (great obligation to each other and to the future of children).

Then брачащиеся or брачующиеся (entering into the marriage; an official and infrequently used word) confirm that their decision to create a family is искреннее (sincere), взаимное (mutual) and свободное (here: of free will). Once the bride and the groom both answer да, they sign the registry.

And that’s when the words объявляю вас мужем и женой (I declare you a husband and a wife) are finally said and the newlyweds целуются (kiss each other). The official then says a few напутственные слова (parting words), congratulates the couple and the guests and everyone gets to raise the first Champaign toast to the new family.

Now that the official part is over with, the semi-official поездка по городу (city tour) begins followed by a reception. More on that later. Now I have to go buy my чайный сервиз (tea set or tea service) or I risk turning up at the friend’s party с пустыми руками (empty-handed).