One of the Two Troubles of Russia: Roads Posted by ryan on Dec 17, 2021 in Uncategorized

Roads have always played an important part of life in Russia. If you remember my last post about types of transportation in Russian cities, let’s explore what all those machines actually run on: roads.

Radishchev stylized his cutting 1790 critique of Catherine’s Russia (which ultimately landed him in exile in Siberia) on a travelogue that follows the 700-kilometer road between St. Petersburg, the capital of the great empire, and Moscow, its largest city. Perhaps the most romanticized overland route in the world is the 9200-kilometer stretch traversing the необъя́тная страна́ enormous country of Russia between Moscow and Vladivostok that is the Trans-Siberian Railway.

It is precisely a road that defines the hard cultural border between the capital Moscow and the rest of Russia: МКАД, which stands for Моско́вская кольцева́я автомоби́льная доро́га The Moscow Ring Road. We can hear some sayings from москвичи́ Muscovites:

Есть ли жизнь за МКА́Дом? Is there life beyond MKAD? 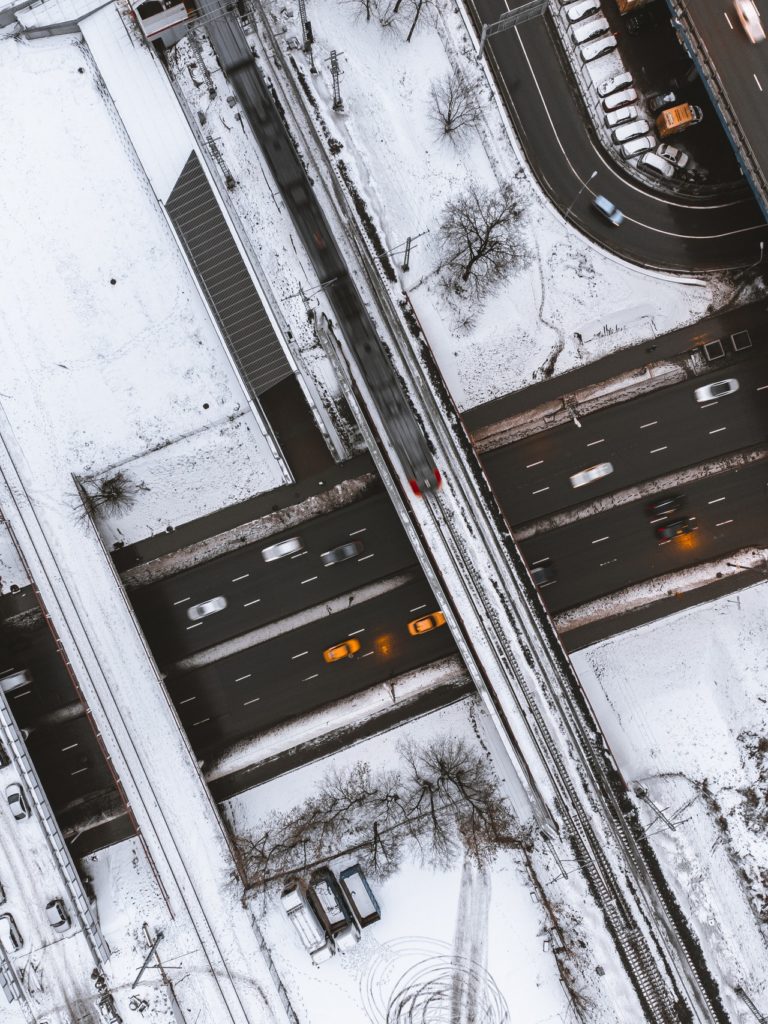 Photo by Nikolai Lapshin from Pexels

There are a variety of roads we can find in Russia. I will introduce the Russian names of them for you, starting with the smallest roads to the largest ones.

This is the smallest road you can find in a city. The word can be translated into English as “alley,” and described as a small street that connects two larger streets in urban centers. Old Moscow is known for its переу́лки.

In terms of real-life examples, you may have heard of or been to the Камерге́рский переу́лок in the center of Moscow. It connects the streets Больша́я Дми́тровка and Тверска́я у́лица and is a completely pedestrian street. One can see the old МХАТ, Моско́вский худо́жественный академи́ческий теа́тр The Moscow Art Theater (which was split up and now is the Chekhov Moscow Art Theater).

This is your typical street. The most common name for a street all over Russia is у́лица. They vary a lot in size, from narrow one-way streets indistinguishable from переу́лок to the 8-lane Тверска́я у́лица in Moscow. In provincial cities, many у́лицы still bear their Soviet names. It is not uncommon for the main street in a Russian town or city to be called у́лица Ле́нина, у́лица Коминте́рна, у́лица Сове́тская. Another common name for a street is one named for Russian writers: у́лица Пу́шкинская, у́лица Салтыко́ва-Щедрина́, у́лица Че́хова. 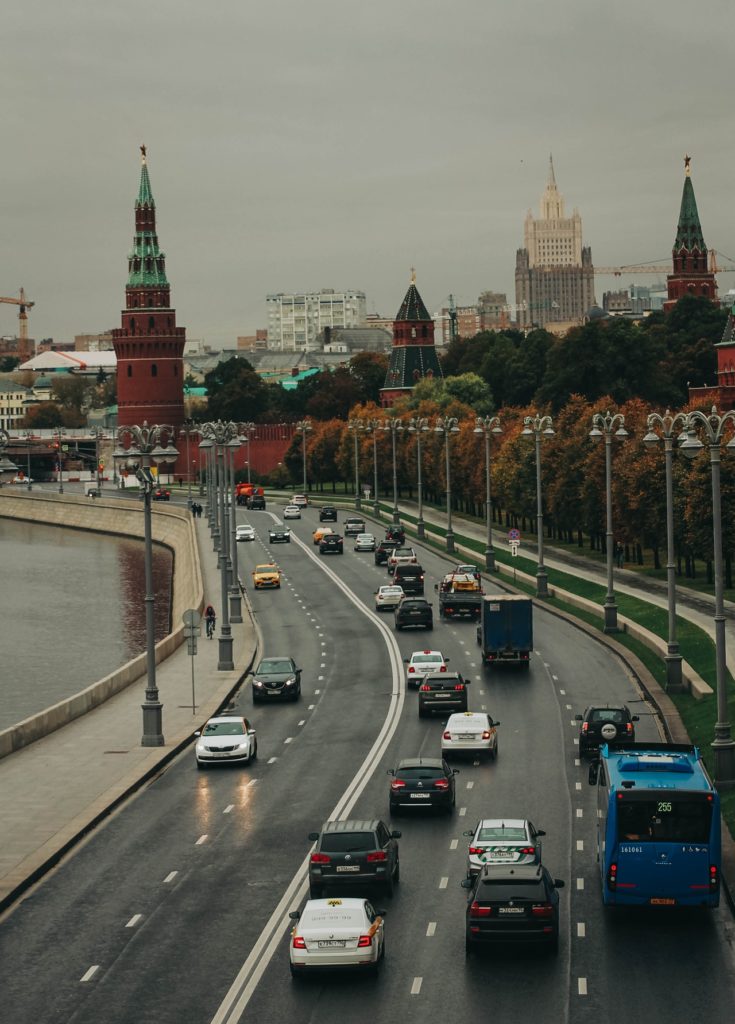 Photo by Azamat Hatypov from Pexels

As the name suggests, this street is located на берегу реки on the bank of a river. It is usually translated as “embankment.” Russian cities can have beautiful embankments, especially in Moscow and St. Petersburg. But please don’t limit your search of beautiful на́бережные to the two most-visited cities in Russia. If you ever have the chance to visit the south, the cities on the Black Sea also have unforgettable views from their на́бережные.

For a good example of a на́бережная we can look to the southeastern Russian city of Samara, where the Volga is over a mile wide. In this spot, the Сама́рская на́бережная separates the city from the river in large terraces, pedestrian zones, and sandy beaches.

This word is usually untranslated from Russian and is rendered as Prospect. I would keep the Russian, but for those who will beg for an English equivalent, I can offer the following approximation: avenue. Prospects are wide avenues that usually cut a city up into various sections. In many cities, trams run down the center of the prospects, and they are the main thoroughfares, as most Russian cities lack freeways. 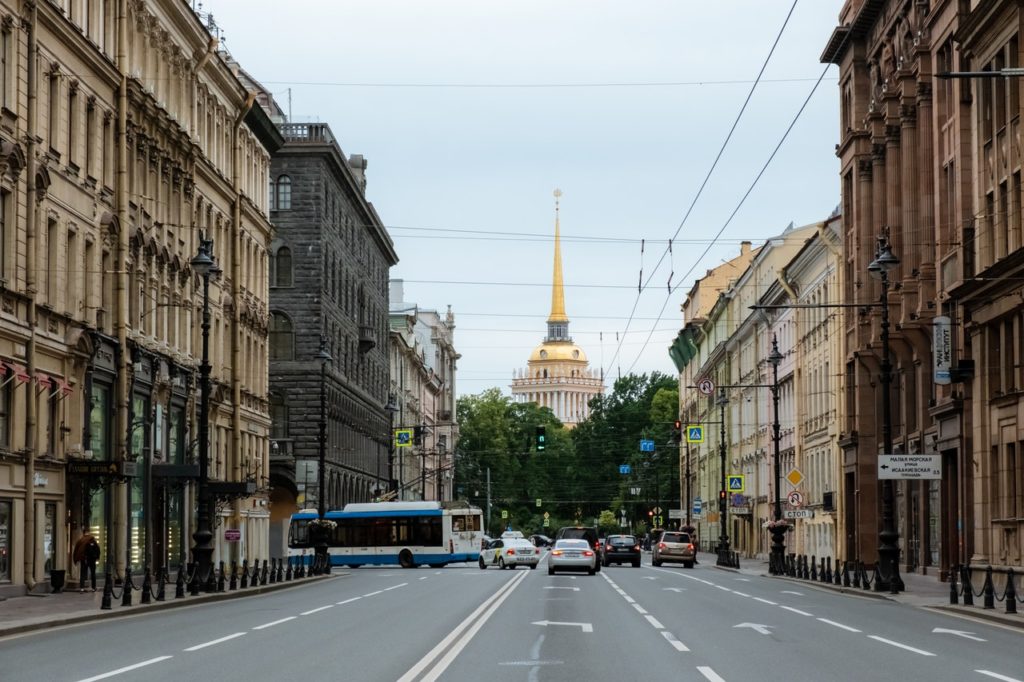 Lovers of all things Russia have heard of or even had the pleasure of visiting Не́вский проспе́кт in St. Petersburg. It inspired a story by Nikolai Gogol. For me, someone who only ever arrived at St. Petersburg by the train from Moscow, it is the first thing you see in Petersburg as you step out from Моско́вский вокза́л The Moskovsky Railway Station. The road traverses all the important canals in the city and ends up at the Эрмита́ж The Hermitage, once the Зи́мний дворе́ц Winter Palace of the tsar.

A шоссе́ is a highway, usually a bit farther from the city center, which connects cities to each other. I mention this word because it has a fun скорогово́рка tongue twister that goes with it:

This word has French origins, and therefore does not decline in Russian.

In Moscow, one of the many шоссе́ leading from the city center is the Ленингра́дское шоссе́, which, as you guessed it, heads in the direction of the city formerly known as Ленингра́д – St. Petersburg.