One Year With Russian Blog! Posted by josefina on Nov 9, 2008 in History

On the 9th of November 2007 I published my first post here on this blog, which is one year ago today, something that calls for a few reflections on the year gone by. This year has been a learning experience for me; I have learned so much, much of things I never thought I’d need to learn or things that I didn’t even know you could learn!, and I intend to keep on learning. First of all I want thank all of you, all the readers, of all nationalities and from all kinds of countries. It is really wonderful to be able to write posts keeping you guys in mind! All your kind comments on my posts warm me – greatly and literally – in this cold country. I’m also very grateful for all your kind corrections of my language – both in Russian as well as in English! Native speakers as readers are truly a gift for any blogger fascinated with not only a foreign language but also its linguistics.

To say the least, this year wouldn’t have been even close to what it has been without you guys! I’ve tried my best to write here about the Russia I know, about the Russia I’ve come to know and love, even after living four years in three cities from Saint Petersburg till Siberia. And I hope that you enjoy what I write. Even though I realize that I’m far from as shocked by Russian Federation today, as I was, say, in 2004 or in 2005, there’s still much I don’t understand [and deep down I know that I’ll probably never get many things in this country]. But that first spark of love, of interest, of fascination, that was lit in my heart a long time ago in a country far from here [yeah], remains within me till this very day, and if it hasn’t gone away after all I’ve lived through then… I think it’s a life-time sentence! And it means a lot to me to be able to share this country with other people who think the same – well, not about everything [which is a good thing, right?] but can agree at least on one point; Russia sure is something else! 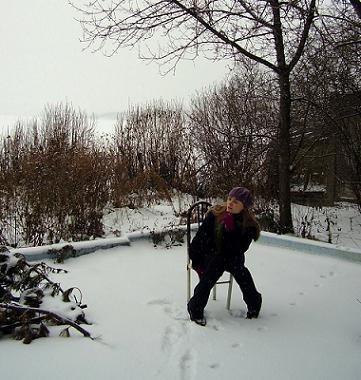 And in a way of celebrating this year, and everything that I’ve learned this year, from you and just from the Russian blogsphere in general, I will here post my first ever article. I wrote it in September 2005, when I was 20 years young and lived in Siberia, and was more ‘shocked’ by Russia. I offered it to Moscow Times, but they demanded a couple of changes, before publishing it [it was also published in Swedish in my hometown’s biggest paper in December 2005]. Here it is, a tiny historical document of times gone by to never come again [judge me gently, remember, I was almost but a child when this was released from my pen…):

[Notes from Another Home]

Sometimes when I catch a glimpse of myself in the mirror over the common wash stand in the rundown dormitory where I live, in the dirty Siberian town of Omsk, I gently ask myself: “Is this woman really that same girl, who moved to St Petersburg just a year ago, with eight pairs of high heels but no book of Russian grammar in her bags?”

One year has passed; I spent three months in St. Petersburg then left that stunning town, after being seriously ill (I had mono for over a month), for Siberia. But why? No normal person would move to Siberia – but I never pretended to be normal – I am the last romantic in the world. I moved to Russia overflowing with idealistic love and dreams of vodka based conversations, inquiring Soviet buildings and understanding the classics in Cyrillic, arming myself only with courage, faith and a smile.

Obvious as it is now; I should have brought something more.

I have tried my best to unravel the Russian enigma, in my spare time, when not busy falling in love with a Russian Officer during three days on a train, applying to university in Omsk to see him again, getting stuck in the sluggish bureaucracy, arriving in minus thirty just to find him already married, getting over him and then baptized into a Siberian Sect (though thinking it was a church), falling in love with a Russian poet, learning to write bad poetry in Russian with him for three months, surviving two weeks of steamy hot camp in the woods while half eaten by bugs, leaving the sect and settling for a private prayer once in a while, living with twenty Chinese boys, getting a job as a teacher of Swedish at the University (but losing the same job, right before starting, due to lack of education, of which they knew I lacked when they hired me), translating the museum of my hero and true love [Fyodor Dostoevsky] from Russian to English, then finding out that it is forbidden for foreign students to work – yes, my real occupation in Omsk is that of a student studying Russian language…

So then, have all this help my disentanglement? Did I find what I came for? Have I sorted out Russia? Made all my naïve dreams come true? Do I understand this country, which I selected to be my new home after reading Crime and Punishment, exclusively and basically? What, are you crazy?! If I had, why do you think I would have to write an article like this? And I have to write this – as a Swedish writer living in Russia, as a human being in a place where human beings weren’t intended to live.

I confess: I am writing a book about Omsk – like all the other foreigners here (all three of us) – with the goal of redeeming the town since that last, infamous, book about “him”. Although I struggled, my notes remind me more and more of its predecessor, [Fyodor Dostoevsky’s] Notes from the House of the Dead.Perhaps not even communism or 150 years of time can change the simple truth; life in Russia is bad, but the people are good. Russian life gives character, it makes one willing but impassive, strong tough emotional; Russian life makes me cry. The first time I cried in Russia was after Beslan, which happen on my third day here, since then my tears have wet the Mother soil countless times.

Russian life frustrates me, the slow pace of a modest provincial town like this makes my nerves curl and my blood jumpy, if it wasn’t officially acknowledged, I never would have estimated Omsk to have twice the population of my home town [Gothenburg]. Russian life confuses me, when Russians regularly tell me not-truth (nepravda) as their substitute for disagreeing or the cruel facts. Russian life taunts me while buying Argument i Fakti in a kiosk, constantly being misunderstood and mocked by the lady behind the glass, only to find out that my vocabulary sadly is not sufficient for reading the paper… Russian life embraces me when a sudden drop of rain touches the tip of my nose on a hot day, while walking in Park Pobedy.

When I lived in Sweden I was too Russian, in Russia I am too Swedish. My logic is constantly proved illogical, and I turn to dreams, instead of pretending to be richer than I am, while I walk down Lenin Street in a poor and polluted city like this. Russia is simplicity – don’t try too hard and everything falls into place – I wonder what its people could strive for more? I have found the Russian soul to be hidden in the most unexpected, like a bridge built to be monumental but left more or less unused, though it is sometimes concealed with shame by the cheapest Western knock-off. I only wanted a country to call my own, my home; I sought Russia, but ended up with not a country, but a loving land populated by millions of yet-to-be-friends.

The Russian enigma can’t be understood; it can only grow in, a very annoying development.

I answer my gentle question to the mirror with a definite conclusion: “No, this woman is certainly not that girl anymore. I changed my high heels for sneakers, never lost neither faith nor courage – now  I actually like grectha, and I finally overcome my fear of tvorog (give me a year and I’ll be eating potatoes and drinking kvass, too) and is known to strike up conversations with cultivated strangers in libraries. Not even finishing three books of Russian grammar could wipe out that gorgeous smile of mine…