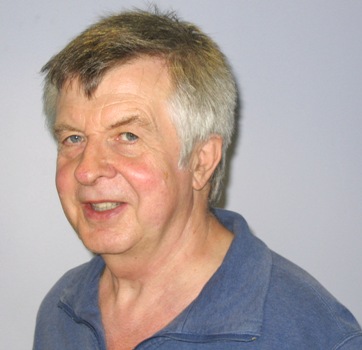 David Roberts is English, lives in Liverpool and has always loved languages but loved science even more, and that’s why he did Chemistry at University and worked for many years as a research chemist. He got vaguely interested in Russian when doing an optional subsidiary course on “Scientific Russian”, but didn’t get very far. Then several years later he came across an obscure scientific paper in Russian that he just had to read. It was only 8 pages but it took him 3 weeks to translate, looking up every word in the dictionary and referring constantly to his “Penguin Russian Course” for the declension endings. At the end of it he was beginning to recognise words and case endings, and the next paper he translated only took a few days. He was now hooked and worked his way through “Teach Yourself Russian” (1970s version), ignoring everything about stress because he thought he’d only ever need it for reading. David says he rather lost interest while Yeltsin was in power, up until three years ago when his family was on holiday in Sicily. Most of the other people in the hotel turned out to be Russians, and he found he could talk to them quite easily but had great difficulty understanding what they said. So then he decided to go to evening classes and is really enjoying getting deeper into the language.

This is David’s guest post, in which we finally receive the answer to the ‘200’ rouble question: Why is it «двести» and not «дваста»?

«Двести» [two hundred] had irritated and puzzled me for years, and I‘d just accepted that the system of noun endings with numbers was a complexity we have to learn to cope with. Then I came across a footnote explaining why we use the genitive singular with the numbers 2-4, in a book, Zabavno by Sergey Sakhno, that I bought in Brussels – an excellent book, although written for French speakers studying Russian. In finding the answer to this question we will come to understand how the Russian number system came to be so complicated, and why some neuter nouns have their plurals (in nominative/accusative) in «ы» or «и» and some masculine nouns have plurals in «а» or «я».

It is all to do with the «двойственное число» [dual category (lit. number)]!

We are accustomed to think in terms of «единственное число» [singular] (one item) and «множественное число» [plural] (more than one item). In the past, several languages made a further distinction: between a pair of items (dual category) and more than two items (plural). There are residues of this even in English, e.g. both/all; either/any. In the now extinct “Common Slavic”, the ancestor of all the Slavic languages, nouns would have three sets of case endings; one set for singular, one set for dual, and one set for plural (3 or more). In most (but not all) of the modern Slavonic languages the dual category has disappeared, but it has left some traces.

In the nominative, the dual and plural endings for many nouns were:

So the “typical” masculine dual ending was like the “normal” neuter plural ending, and vice-versa, and for “typical” feminine nouns it was the same in both. This explains a lot of things, as we will see shortly.

In Common Slavic there were two forms for the number 2, as there still are in modern Russian:

In modern Russian neuter nouns go with the masculine ones, but in Common Slavic they went with the feminine nouns. 100 = «сто» was a neuter noun, so for two of them they would use «две» for 2 and the dual form of 100: «сти». This has survived into modern Russian – and that is how we get «двести» for 200!

The numbers «пять» [five] and above were originally «собирательные существительные» [collective nouns] (they still decline like feminine nouns), so we should think of «пять» as meaning a pentet, «шесть» as meaning a sextet, «восемь» meaning an octet, etc. So for 5 hundreds we think of a pentet of hundreds. Of hundreds is of course genitive plural, «сот», so 500 is «пятьсот». Similarly 600 is «шестьсот», etc. In contrast to 5 and above, 1-4 can be regarded more like adjectives of quantity – they decline like plural adjectives, similarly to «все» [all].

Why do we use genitive singular for nouns that there are 2, 3 or 4 of in Russian? Well, when Common Slavic speakers wanted to say “two wolves” [wolf = «волк»] they would use the masculine form «два» [two], with the nominative dual of «волк», which is «волка». When they wanted to say “two dogs” they would use the feminine form «две» [two], with the nominative dual of «собака», which is «собаки» (same as the plural). So…

But the numbers «пять» [five] and above were always treated as collective nouns, so they took the genitive plural. So…

Other legacies of the dual category:

There are some things that, when there are more than one of them, usually come in twos – «берега» [river banks], «рукава» [sleeves], «глаза» [eyes], «уши» [ears], «колени» [knees] and «рога» [horns] to name but a few. In Common Slavic times the words for these would be encountered in the dual form more often than in the ordinary plural form. So as the language evolved, for these nouns it was the ordinary plural version that died out, leaving the dual form as the version to use for more than one. So for example:

Note that «колено» [knee] has «и», not «ы» in the plural. «Колено» [knee] has some other peculiarities in the plural. Its primary meaning is ‘knee’, but it has come to be used for a bend in a pipe (English plumbers and chemical engineers prefer to talk about elbow bends). Bends in pipes don’t always come in twos, so when it’s used in this sense «колено»’s plural is a bit more conventional – but not completely conventional, it is «коленья»! As if this isn’t enough, «колено» is also used to mean a bend in a river, and for this meaning its plural is fully conventional: «колена».

Thus parts of the body that occur in pairs usually have plurals derived from the old dual forms – masculine nouns have neuter-type plurals in «а» or «я» and neuters have masculine-type plurals in «ы» or «и». Feminine pair-nouns behave normally, because their dual was often the same as the plural. All this is very logical so far, but languages never stick to pure logic and there are some exceptions to the rule. One is «череп» [skull] – we only have one so the plural should logically be «черепы», but it isn’t, it’s «черепа». Another one is «бедро» [hip] – we have two, so we might expect the plural to be «бёдры», but it’s not, it has the regular neuter form «бёдра».

Things that occur in pairs are not the only ones to have switched over plural endings. There are quite a lot of other masculine nouns with plurals in «-а», for example «город» [town, city], and other neuter nouns with plurals in «-и», for example «яблоко» [apple] and other neuters ending in «-ко». Did these irregularities, or at least some of them, arise by analogy with the paired nouns?

The number system seems more complicated than it really is, as a result of the dual nominative endings being taken for genitive singular. Realising this, everything fits logically into place, including some points not covered here, like declension of numbers of things and what happens to accompanying adjectives.