December has finally arrived! The holiday season is upon us! It’s as if our ancient ancestors who invented the winter holidays knew that we needed a bit of an emotional boost at the beginning of the winter season, and especially after the dreary, cold, wet hell that November brings us (is it me or is the most depressing time in anyone’s life a dark, gray Sunday evening in November?). In the United States, after Thanksgiving we get into the holiday season, which really was the inspiration for me for this post. I usually switch on the 1964 TV special Rudolph the Red-Nosed Reindeer on the very evening of Thanksgiving, which is enough to transport me to holiday land.

As you might remember from my post back in September, in Russia there is a calendar understanding of the seasons. Therefore, winter officially begins on December 1. On this day you will start to see иллюмина́ция the holiday lights being hung around the city. On the фонари́ light poles, in the витри́ны storefronts, in the торго́вые це́нтры shopping malls, out come the гирля́дна garland, ёлки Christmas/New Year trees, and, just like our Santa Claus, Дед Моро́з Grandfather Frost along with his faithful granddaughter Снегу́рочка Snegurochka (a.k.a. The Snow Maiden) make an appearance. 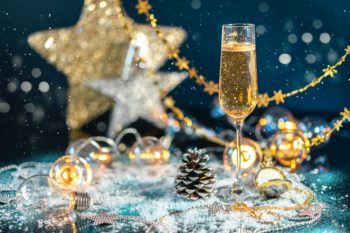 Anyway, now that we are imagining the lights, colors, presents, and excitement, I would like to turn back to the theme of holiday movies, and more specifically, what is known in Russian as мультипликацио́нные фи́льмы, or, for short мультфи́льмы (or, even shorter, му́льтики) animated films/cartoons. In Russia, a classic of Soviet animation, and inevitably connected with the New Year holiday is a work of пластили́новая мультиплика́ция, what we would call “clay animation,” usually in common parlance shortened to “claymation.” When you reach for something in the fridge, but your mother swats away your hand, saying Не тро́гай! Э́то на Но́вый год! Don’t you touch that! It’s for New Years! you can pout, stomp into the living room, plop yourself in front of the TV and turn on the 1983 animated film «Па́дал прошлого́дний снег» Last Year’s Snow Was Falling.

In this whimsical children’s short animation, we are plopped into a different reality, one of absurd humor and amazing metamorphoses. The soundtrack swings back and forth between a twangy but bittersweet theme, a disco-y sax tune, and a whacky cacophony of bird-like sounds that ultimately form a melody with the bustle and ruckus of a wild goose chase. The music is not the only unstable element in this пластили́новая ме́стность clayey locale: in one scene, a horse gets stuck in deep snow, with only its tail sticking out. In what turns into a very brief reenactment of the Russian children’s tale Ре́пка (usually translated as “The Gigantic Turnip”) it is indeed a ре́пка that is retrieved from the snow. But where did the horse go? Did anyone care to begin with? 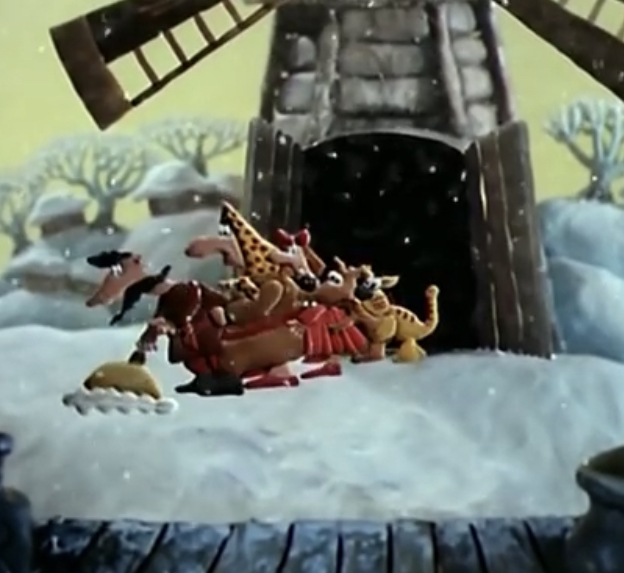 An extremely brief re-enactment of the Russian tale Репка

The narrator is also a bit scatterbrained; he will go off on tangents, forget his place, stop a storyline short and promise to tell the rest later. He doesn’t even afford us a proper introduction to the main character for a good five or so minutes into the cartoon:

The wife, wielding her rolling pin, sends the man out to look for a New Year tree. He seems to at least want to please her wishes, as he examines different objects (not necessarily trees) and shouts Малова́то бу́дет! It’ll be too small!

In addition to the ре́пка, other features from Russian folklore make an appearance. There is the legendary избу́шка на ку́рьих но́жках the house on hen’s legs, the famed residence of Ба́ба-яга́ Baba Yaga. And let’s not forget the seemingly omnipresent щу́ка pike (fish), who makes an appearance in various bodies of water: he shows up in a про́рубь a hole in the ice, коло́дец a well, and even in a ведро́ a bucket.

I invite you to watch this cartoon yourself on YouTube. It is available through the link below. This video is quite useful because there are subtitles available in both English and Russian. Let me know what you think in the comments!