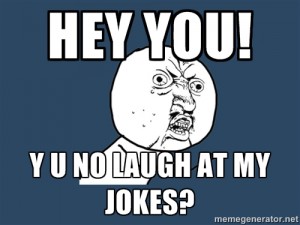 When I first came to America in the distant 2003, many things seemed pretty amazing to me. Sadly, the same could not be said about American humor. Despite the fact that I understood English really well even then, I did not find most of the humor funny. I really tried: I watched multiple episodes of SNL (Saturday Night Live), AFV (America’s Funnies Videos), The Tonight Show, South Park, Family Guy, and a bunch of other TV shows. Fast-forward ten years and you will find me enjoying SNL, hysterically laughing at Jim Gaffigan’s “Mr. Universe,” quoting Leno’s jokes, and watching up to 6 episodes of Family Guy back-to-back.

In other words, it took me several years of living in the US to fully grasp the humor behind what was being said. Once I became familiar with modern American culture, started following current events, and began recognizing public figures, the humor started adding up.

Generally speaking, a lot of humor is based on association, stereotyping, and cultural referencing. Therefore, in order to find the humor of a particular country or culture funny, you need to know and understand that country or culture fairly well. To help you better understand Russian humor (русский юмор), let me share some thoughts on the subject. Here is a quick Russian video to warm you up 🙂 The title is “American idea of a typical Russian morning.”

Some thing are universally amusing 🙂

Babies making funny faces, dogs chasing their tails, cats fighting their reflection in the mirror – you can expect a similar reaction to things of this nature whether you are in US or Russia.

I found a couple of jokes online that seem pretty funny in both languages:

An American is taking a flight operated by Russian airlines. The flight attendant comes up to him and asks,“Would you like to eat?”

“What are the options?” he asks.

Three couples are having dinner in a restaurant.

The American asks his wife,“Pass me the honey, honey!”

The English asks his wife,“Pass me the sugar, sugar!”

The Russian asks his wife,“Pass me the meat…(he pauses to think)… cow!”

Other things are not universally amusing 🙂

When it comes to physical pain (think AFV’s jaw-breaking, ball-pinching, face-scraping, limb-displacing juicy sequences), most Russians will not find it funny. Despite the fact that similar shows seem to have popped up on some Russian TV stations, it is not typical for Russians to find any kind of pain amusing. The Internet might claim its own though; in 20 years or so these types of incidents might be just as funny in Russia, as they are in other western cultures.

Believe it or not, but “American humor” is a term that is widely used in Russia. Russian understanding of American humor is pretty distorted. If you were to ask a Russian to give you their first association with the words “American humor,” they would most likely say: “Hitting somebody on the head with a hammer,” or something to that extent. Needless to say, “American humor” does not get a very high ranking among most Russians. This gross misconception about American humor in Russia stems from the types of American films, cartoons, and TV shows that air on Russian television. Take any American cartoon, like Tom and Jerry, or a more recent one, like Phineas and Ferb, add some AFV-like shows to the mix and top it all off with movies like Airplane or Scary Movie, and you might not have to wonder why Russian understanding of American humor is so one-sided. The full depth of American humor would not be graspable by a typical Russian who knows little to nothing about American culture, current trends, or events. That is why shows like SNL or Family Guy will never be understood there, even with perfect translation. The same is true with Americans and Russian humor: you will not grasp a lot of Russian humor unless you are familiar with references and stereotypes used in the jokes.

Some things are just a matter of preference: nothing can make South Park funny if you don’t find it funny. By this rationale, some Russian jokes will never be funny to some people, regardless of their degree of assimilation into the Russian culture. Sometimes, however, it’s the quality of the joke or the quality of the delivery that makes all the difference – this rule is also universal for all cultures.

Below is a funny Russian YouTube clip. Give it a try, at the very least, you might find the animation amusing! The characters depicted in the clip are current Russian president Putin and former Russian president Medvedev.