Word of the Week: «Возвращение» [Return] Posted by josefina on Jan 14, 2010 in language 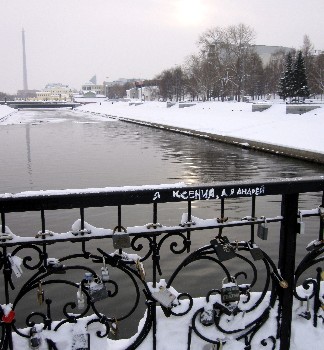 Officially the project «мост любви» [bridge of love] was turned down by «правительство города Екатеринбург» [administration of the city of Yekaterinburg] a couple of years ago. But that project concerned another bridge (which can be seen far away in the background). The tradition to put a «замок» [lock] with your names and the date of your wedding (or engagement) is still strong among people in love in Yekat…

«Наконец!» [Finally!] «Я вернулась в Россию!» [I have returned to Russia!, or I’m back in Russia!]. And what better way to mark this return but to explore the word «возвращение» [return; giving back; repayment] as our word of this week? Not only because we haven’t had a ‘word of the week’ for a long, long time but also because this word comes closely connected with two interesting verbs: «возвращать» [to return, give back; to repay (a debt, loan, etc); to restore; to recover, regain; get back] and «возвращаться» [to return, come back, go back]. Both of these are «глаголы несовершенного вида» [imperfect verbs (lit. ‘verbs of the imperfect aspect’)], and I’ll talk about how they look «в совершенном виде» [in perfect aspect] in a little moment, but let’s focus on the last one of them first: «возвращаться» [to return, come back, go back]. You probably noticed that the biggest difference between «возвращаться» and «возвращать» is that one of them ends on «ся». These two little letters are actually what used to be the pronoun «себя» [me; ourself, myself; ourselves; herself, himself; itself; themselves, yourself; yourselves] and is a sure indication of that this verb is a special kind of verb – a «возвратный глагол» [reflexive verb]. The adjective «возвратный» [return (attrib.); reflexive (gram.)], as you might have guessed already, shares a common «корень» [root] («возвра-») with our word of the week «возвращение» and is thus also concerned with things ‘coming back’, ‘returning’ or simply ‘reflexing’ something back to another thing. Another noun that sounds even closer to it this adjective is «возврат» [return; recurrence; repayment]. You’ll often come across this noun in stores in Russia used in the following phrase: «товар возврату не подлежит» [the merchandise is not liable to return, i.e. cannot be returned]. It feels good to finally have shared my knowledge of this kind of Russian store policy with the rest of the world! And this would, of course, mean that if you see a sign saying «товар возврату подлежит» then you can return what you’ve bought there and expect to get your money back. Might not sound important right now, but you just wait until it turns out that your new pair of «валенки» [pl. felt boots (worn in Siberia during winter)] does not match ANYTHING else that you’ve got in your closet and you realize that in the country where you live it doesn’t get down to minus 40 C that many days of the year anyway…

How to best explain the Russian grammatical phenomenon of «возвратные глаголы» [pl. reflexive verbs]? If your native language lacks this, then it could be a little bit «трудно понять» [difficult (pfv.) to understand] at first. (I say that even though I was taught as a teacher never to ever tell a student that something was «трудно понять», but to use the adverb «интересно» [interestingly] instead.) The main difference between verbs that are reflexive and verbs that are not is that reflexive verbs don’t always need to be followed by an object. This is because the tiny «ся» at the end of them already indicates that the object and the subject are one and the same. Thus when you’re using a reflexive verb you are ‘reflexing’ the action of the sentence back to yourself. Does that make sense? When using the imperfect «возвращать» in the meaning of ‘to return’ the question that follows is it «что?» [what?] as in this example:

The object in this sentence – the «что» so to speak – is «деньги» [pl. money]. The same goes for when you’re using the perfect aspect of this verb which is «вернуть» in the context of ‘to return’. But this object doesn’t always have to be direct one, it could also be an indirect object and answer the question «кому?» [to whom?]:

«Он вернул мне учебник по астрономии» – [He returned the textbook on astronomy to me].

But with the reflexive verbs «возвращаться» (impfv.) [to return, to come back, be back] and «вернуться» (pfv.) [to return, to be back, make back; cut back; retrace one’s steps]  you don’t always need an object – be it direct or indirect! That’s because the subject is enough to make the action described by these words understandable. Let’s have a look at two examples, in which all of the words following the verb are just descriptions of time or place:

«Он возращается поздно вечером после работы» – [He returns late in the evening after work (usually, if not always since here you have this verb in imperfect aspect)].

«Она вернулась на Урал» – [She came back to the Urals].

The last sentence can also be translated as ‘she’s back IN the Urals’. Then it does not indicate any motion in any direction whatsoever in translation, as is always the case with this verb in Russian. That’s why it is very important that you remember to always ask yourself «куда?» [to where?] after using the verbs «вернуться» and «возвращаться». Even though you’ll often be tempted to ask «где?» and then use the completely wrong case (I won’t even tell you which case is the ‘completely wrong’ one because I don’t want you to know enough to make this mistake!). 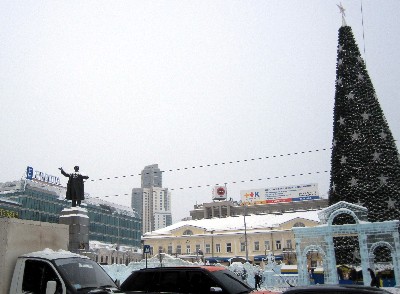 Don’t you think it looks like Lenin’s arm is waving back at me and saying: «С возвращением!» [(Congratulations on your) return!]. Here he’s standing in downtown Yekat squeezed in-between a brand new «торговый центр» [shopping mall] and the seasonal recreational «льдяной парк» [ice park].

P.S. Don’t despair because of what I said above if you’ve recently bought yourself a pair of «валенки» [pl. felt boots]! I bought a black pair of those myself back in the winter of 2005/2006 and I can assure you that they look awesome paired with a black miniskirt!