Word Order and Logical Emphasis Posted by Maria on Mar 20, 2014 in Russian for beginners 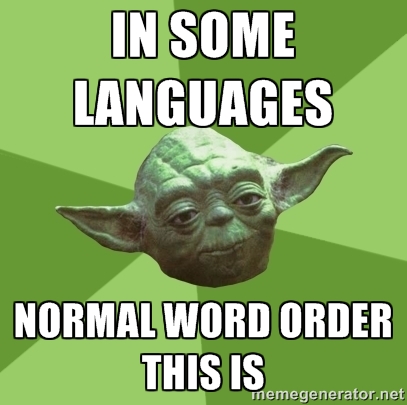 Because you know I had to include Yoda

One of the first things a learner of Russian hears about the Russian sentence structure is that, unlike in English, the word order (порядок слов) is relatively free. While understandably daunting for the beginner, this order not only allows for greater flexibility, but also helps with the logical emphasis in the sentence. What does that mean for the English-speaking learner?

First of all, an awareness of the Russian word order may answer some of the questions you may have about the lack of articles in Russian. If Russian has no articles, how do people know if the thing being talked about is new or known? Well, the word order in Russian places the known pieces of information – what is called the theme (тема) – at the beginning of a sentence, and the new pieces – what’s called the rheme (рема), at the end. For example,

means “A person entered the room,” and

means “The person entered the room.” In other words, the listened can infer whether the thing is known or unknown without any articles thanks to its placement in the sentence.

We can see this tendency in newspaper headings. For example, an article in Газета is titled “В Колорадо разбился двухмоторный самолёт” (A twin-engine plane crashed in Colorado). The emphasis is placed on the plane or, perhaps, the type of plane, that crashed, and Colorado is given as background information.

Likewise, an article in the Известия (News) newspaper is called “На Mail.ru появится платный контент” (“Paid content to be hosted on mail.ru,” a popular email service in Russia). The author put the new information about the paid content last. Word order is a powerful tool for conveying emphasis. For example, the tagline of the most popular Russian search engine Яндекс (Yandex.ru) is “Найдётся всё” (Everything will be found), which makes it read like “Whatever it is you’re looking for, we’ll find it.”

Next time you listen to a song in Russian, pay attention to what words are placed at the end of each sentence. For example, the famous song “Я спросил у ясеня” (“I asked the ash tree”) tells about a man who is looking for his beloved (любимая). He ends up asking his friend where his beloved is, to hear, “была тебе любимая, а стала мне жена” (she was a beloved to you, and now she’s a wife to me). Note how the words “любимая” and “жена” are placed towards the end to show that this change of relationship status is the point of the sentence.

So if you ever need some guidance when putting words together into sentences in Russian, try asking yourself what the point of your sentence is. Once you’ve identified this new and important information, feel free to place it last for emphasis!