Basilica of Our Lady of Guadalupe Posted by sasha on Jun 28, 2017 in Uncategorized

One of the most important sites in Catholicism is located in the outskirts of Mexico City. The Basílica de Nuestra Señora de Guadalupe (Basilica of Our Lady of Guadalupe) is visited by millions of people every year and is a national shrine in Mexico. It’s actually the second most visited shrine in Catholicism, behind the Vatican. There’s a fascinating story behind the construction of the original basilica, and that’s where we’ll begin. 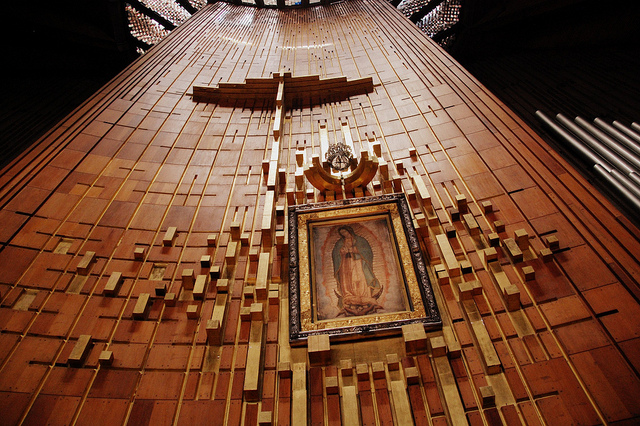 Image by LWYang from flickr.com.

Back in 1531, Our Lady of Guadalupe appeared before a peasant named Juan Diego on Tepayac Hill. She requested that a shrine to her be built there, and Juan Diego quickly relayed the message to the archbishop. The bishop didn’t believe him, however, and demanded that he return with a sign to prove the encounter. Appearing a second time, the Virgin told Juan Diego to return the next day. When Juan Diego returned home that night, he found his uncle to be terribly ill. For the next two days, he stayed at his uncle’s side, finally leaving to find a priest to prepare him for death. It was then that the Virgin appeared to him a third time and uttered the now famous words:

She told him to collect flowers from the top of the hill to show the bishop. Even though it was December, Juan Diego found roses there. He wrapped them up in his tilma (cloak) and brought them to the bishop. When he opened it, the flowers fell to the floor and an image of the Virgin appeared on the tilma. Her wish soon came to fruition, as the bishop ordered the construction of a shrine immediately. The next day, Juan Diego returned to his uncle to find that he had been healed and that the Virgin had also visited him. While there is most certainly a debate about the legitimacy of the story, the tilma remains one of the most sacred cultural relics in Mexico and is still on display in the basilica to this day.

Our Lady of Guadalupe

The fountain on the large grounds.

Devotion to Nuestra Señora de Guadalupe continued to grow in Mexico after word of the encounter spread. The Spanish used the story to convert millions of indigenous people to Catholicism. She was made patroness of Mexico City in 1737 and then given a feast day (December 12) by Pope Benedict XIV a few years later in 1754. Eventually she was made patroness of the Americas as well as the Philippines.

The Basilica – Old and New 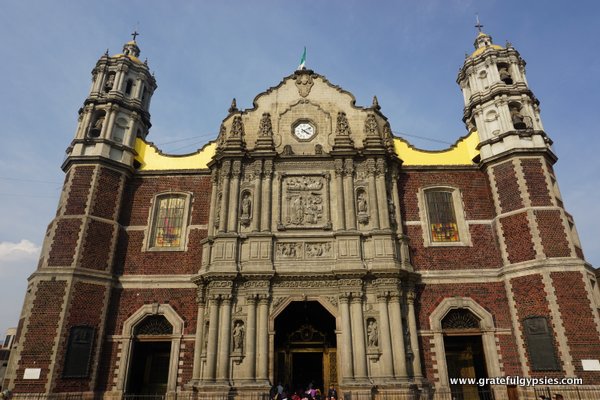 The original basilica is officially known as Templo Expiatorio a Cristo Rey (Expiatory Temple to Christ The King), or simply as Antigua Basilica (Ancient Basilica). It was constructed between 1531 and 1709, when it was consecrated. In 1921, a bomb was detonated near the altar, causing great damage to the building. The tilma survived the blast, and is now displayed behind bulletproof glass. As with many other ancient structures in Mexico City, the basilica began to sink and was deemed unsafe. 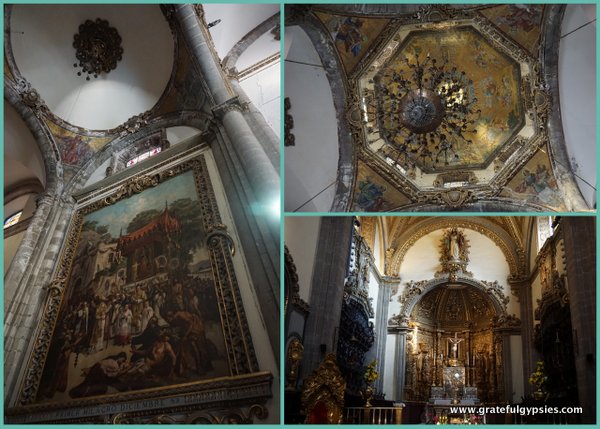 Inside the Ancient Basilica.

The Ancient Basilica was closed to the public from 1976-2000, but you can once again go inside to view religious art and sculptures. Outside is a statue to Juan Diego, who became the first indigenous saint from the Americas when he was canonized in 2002. 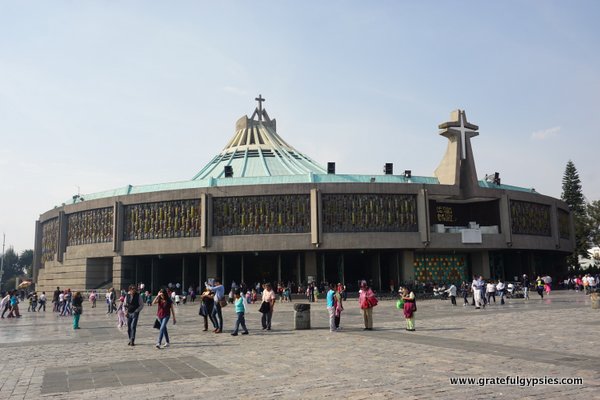 Construction of the Nuevo Basilica (New Basilica) occurred between 1974-76. It was designed by the architect Pedro Ramírez Vásquez in a circular shape that looks more like an arena than a church. Thanks to its shape, the holy image of the Virgin can be seen by everyone inside. 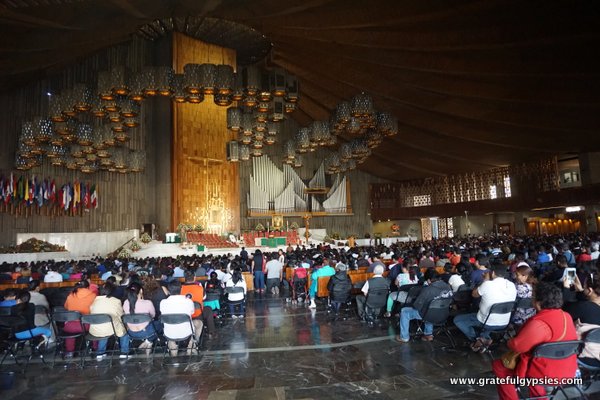 One of many masses in the New Basilica.

The New Basilica can hold thousands of people and it often does. There are masses every day of the year here and confessions are heard as well.

What Else to See 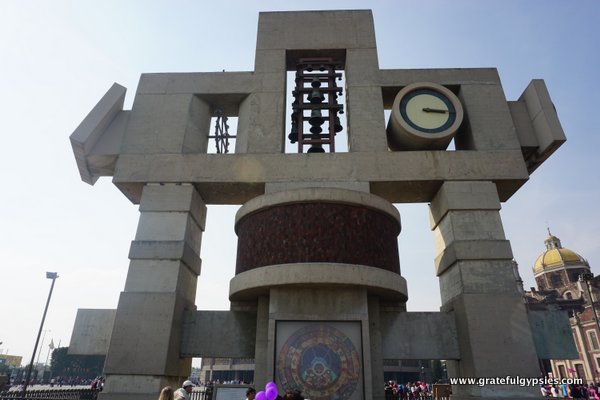 There’s lots more to see here, including the impressive bell tower known as the Carillón just opposite the New Basilica in the plaza. In addition to the clock and bells, it has a drawing of the sun stone (the Aztec calendar). 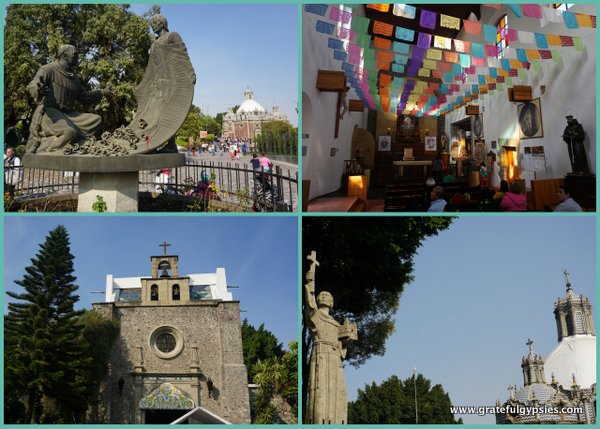 There are a few other churches you can visit on the massive grounds, including the Antigua Parroquia de Indios (Ancient Parish of the Indians). 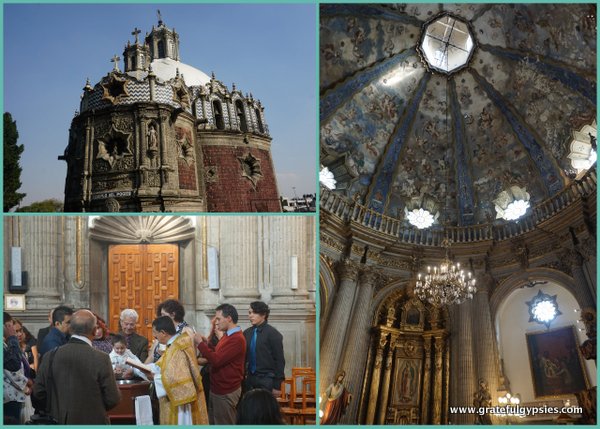 There’s also the Capilla del Pocito (Chapel of the Little Well), a beautiful baroque structure built to honor the well that sprung up during one of the Virgin’s appearances. When you go inside to have a look, don’t be surprised if you find that an important ceremony such as a baptism or first communion is taking place. 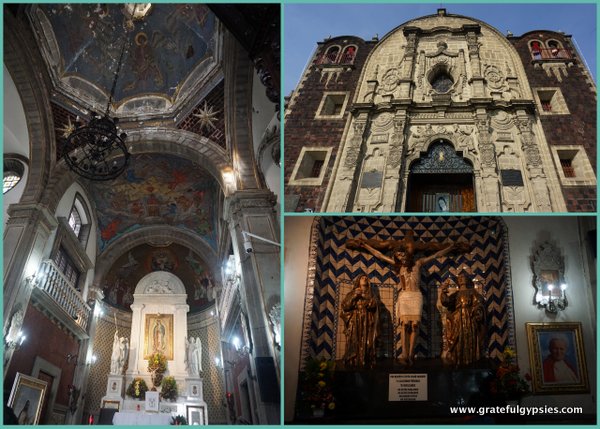 Climb the hill to see this one.

If you can handle a little walk uphill amongst the crowd, you can go see the Capilla del Cerrito (Cerrito Chapel). It’s worth it for the views of the city off to the side, and the interior of the church is quite beautiful as well. 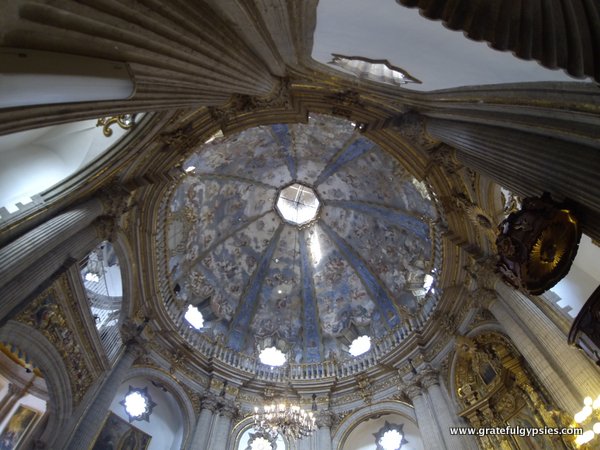 A great place to visit.

There are always crowds here, but they number in the millions on December 12 (Our Lady of Guadalupe’s feast day). Many pilgrims crawl on their knees for miles before praying to the Virgin. Regardless of what day of the year it is, this is an extremely important and holy site and a fascinating place to visit.