Chichen Itza Posted by sasha on Mar 12, 2012 in Uncategorized

With the year 2012 underway, we were thrilled to be heading to one of the great cities of the Maya – Chichen Itza. If the world is really going to come to an end this year, I wanted to at least see where the people who made that bold prediction lived and learn about their culture. More on the whole apocalypse thing later; for now let’s get to our trip to the fantastic ruins.

Still jet-lagged and a bit worn out after a 5-hour bus ride from Cancun, we arrived at our hotel in the evening and relaxed, saving up our energy for a big day of exploring the ruins. We stayed at the Dolores Alba, which also has a location in the city of Merida. This is a great place to stay if you’re keen on practicing your Spanish, as the staff spoke basically zero English. Despite our horrendous Espanol, we managed to get by there. The hotel is within walking distance of the ruins, but they will happily give you a ride down there. It’s also reasonably priced, features two small swimming pools, and cooks up some delicious food; I recommend the cleverly named Chicken Itza. 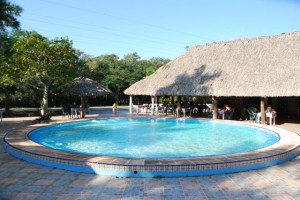 Poolside at the Dolores Alba hotel.

Early in the morning, we got going with a nice complimentary breakfast and some coffee, and then we joined another couple traveling from Sweden and headed out to the ruins. We decided to hire a local tour guide for the morning, which was a great decision and was quite a bargain at 600 pesos (about $45) for the four of us. While one major benefit of arriving the night before was that we were well-rested, it was even better that we arrived early enough to beat the hordes of tourists who arrive in massive groups during the afternoon. This made for a much more leisurely and enjoyable experience, and we were even finished before the vendors were fully open for business. 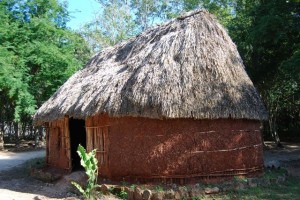 The name Chichen Itza translates as “at the mouth of the well of Itza,” and it most likely refers to the sacred bodies of water underneath the once prominent city. First up, we checked out a traditional Mayan residence, which are called palapas (the Mayan word for “roof”). Actually, on our bus ride from Cancun, we saw many similar houses along the road, so plenty of people call them home to this day. From there we caught a glimpse of one of two cenotes that are present in Chichen Itza. As our guide told us, the Mayans got their drinking water from this particular cenote, while the other one was used in human sacrifices. Unbeknownst to the Mayan people, the two actually linked up somewhere below the Earth, so they were basically drinking water that also featured remnants of dead people. Maybe that’s why the city is now a historical site and no longer the thriving cultural center it once was.

While Chichen Itza is mainly associated with the Mayan people, we learned of the importance of the Toltecs, who migrated to the city and brought with them their own customs, traditions, and architectural designs. Wandering around Chichen Itza, you can see the fusion of both Mayan and Toltec culture in the style of the various structures. 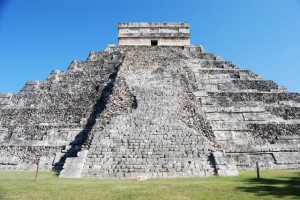 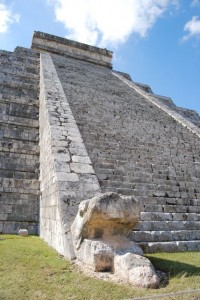 One of the serpents running down the temple.

The highlight of the entire area is without a doubt the Temple of Kukulkan, or El Castillo (the castle) as it’s more commonly known. This 30 meter tall pyramid was a temple to the Mayan feathered serpent god, and it’s one of the New 7 Wonders of the World. It’s also thought to have served as a calendar, as each of the four sides contains 91 steps. Including the top platform as another step, you get 365 steps in total – one for each day of the year. Also, there are nine platforms on each side; when looking at one side, which is divided by the staircase, you get 18 platforms, or the number of months in the Mayan calendar. Finally, there are 52 panels, representing the number of solar years in a Mayan calendar cycle. As if that weren’t incredible enough, there’s also the bi-annual serpent shadow. At both the spring and fall equinox, the way that the sun hits the northern side of the temple suggests a massive serpent running down the side of the temple. It’s a testament to the Mayans stunning aptitude for astronomy, as they were able to make those exact calculations before the invention of the wheel, yet alone the telescope. 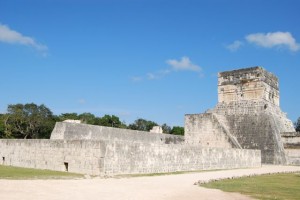 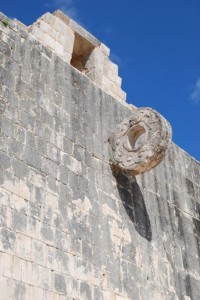 Most. Difficult. Game. Ever.

From there, we went on to check out the Main Ball Court, or the Juego de Pelota, the largest and best preserved ball court in the Mayan world. This game was called pok ta pok, and it is believed that this was much more of a ritual ceremony than a friendly game. The number seven, which was sacred to the Mayans, is prevalent in the ball court: two teams comprised of seven members each would attempt to hurl a ball through a ring mounted on the wall, seven meters above the ground, and if you clap your hands or shout in the court, it will echo seven times. It was forbidden to use hands, so the men would instead use their hips or other various body parts to hit the large, heavy ball. The object was to pass the ball to the captain, who would use a sort of racquet to score. According to our guide, one game could take up to a whole week. And you thought baseball games were long! After the game was finished, there would be a sacrifice. You’d think that the losers would be the ones beheaded, but that was not the case. It was a great honor to be sacrificed, so the winners were actually the ones who bid farewell to the mortal world. Oh yeah, and it is said that seven snakes emerged after the winning team’s captain was decapitated. 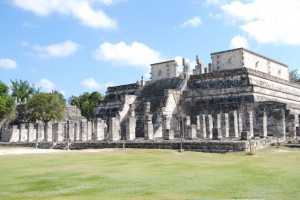 This one's for the Warriors!

There’s plenty more to see in Chichen Itza, including the Temple of Warriors, or Templo de los Guerreros. At the top of the stairway sits a statue of Chac Mool, one of many that were found amongst the ruins in Chichen Itza and all across Mexico. The ancient name is thought to mean “thundering paw,” but today it is mostly translated as “red jaguar.” It is thought that the statue may have been used to hold the head and/or heart of a human sacrifice. 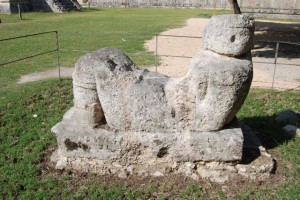 One of the many Chac Mool statues. 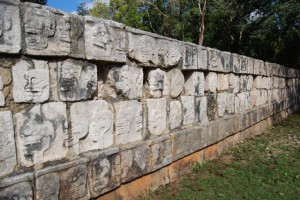 If you crossed the Mayans/Toletcs, your head would end up here.

Speaking of human heads, the Tzompantli, or Skull Platform (Plataforma de los Cráneos) was used to display human skulls from either war captives or sacrifices. As I mentioned earlier, sacrifices also took place in one of the cenotes. This one is called the Sacred Cenote, or Cenote Sagrado, and it’s believed that the rain god Chaac lived at the bottom of this particular cenote. As such, the Mayans would sacrifice people to appease him in times of drought. 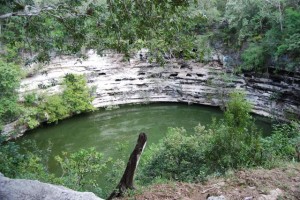 Moving on from all the talk of human sacrifice, there are lots of other interesting buildings inside Chichen Itza, including the Observatory (El Caracol), where the Mayans carefully observed celestial movements. 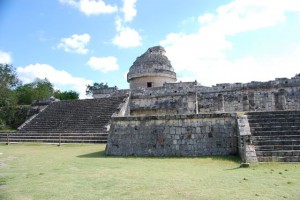 The observatory where the Mayans honed their astronomy skills.

Before we left, we also saw what the Spanish thought was a church (La Iglesia), as it is decorated in elaborate masks that were believed to be Mayan gods. According to our guide, however, Mayans used this structure for rituals involving psilocybin (magic mushrooms). Apparently they would just eat a ton of mushrooms and hang out in there for hours at a time. As I commented to my girlfriend, this was the Mayan’s version of a Phish concert. 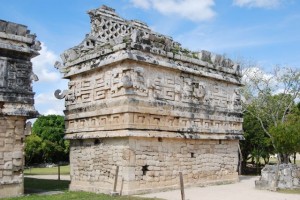 And the "church", where the Mayans went to trip balls.

After a very informative and fascinating morning exploring this great archaeological wonder, we bid farewell to our tour guide and headed back to our hotel to soak our tired feet in the pool. We enjoyed another fine meal and few cold cervesas, and then it was time to hit the road again. Thankfully, getting out of town was as simple as crossing the street and flagging down a second class bus. Our next stop was the colonial town of Valladolid, just an hour or so down the road.